Ellen Lloyd - AncientPages.com -  The Zuni Indians in New Mexico are unlike any other Native American tribe. Not only is their language, religion, and blood type surprisingly different from all other tribes, but according to a thought-provoking theory, the mysterious Zuni Indians may also have close ties with the people of Japan.

Most scientists think the Zuni Indians are different because they lived in isolation. According to linguists, the Zuni have maintained the integrity of their language for at least 7,000 years.

However, the Zuni do share a number of words from Keresan, Hopi, and Pima pertaining to religion and religious observances. However,  Professor Nancy Davis from the University of Chicago has an alternative theory that she thinks explains the Zuni Indian's puzzling ancient history.

Professor Davis suggests the Zuni Indians came in close contact with Buddhist monks who migrated in the 14th Century from Japan to the west coast of what is now the American continent. In her book, The Zuni Enigma: A Native American People's Possible Japanese Connection, Professor Davis presents evidence that she believes supports an ancient Japanese-Zuni connection.

Professor Davis has studied the Zuni Indians for decades and made several visits to the Zuni pueblo. Her theory is unpopular among other scientists, but she points out that no one has so far managed to prove her wrong. 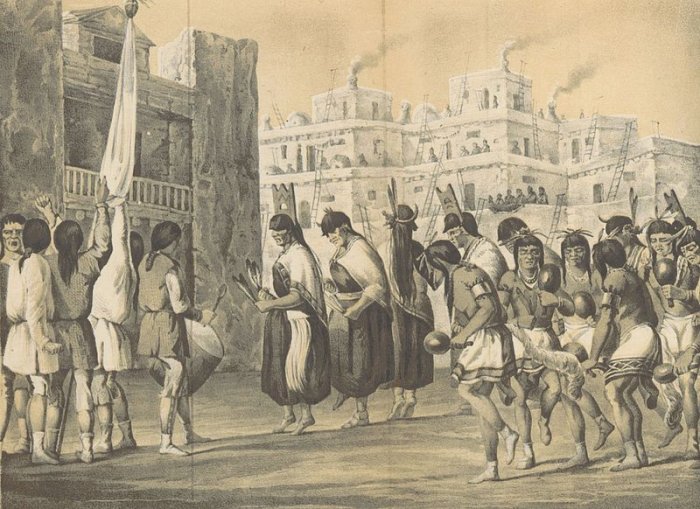 Image of Zuni Pueblo created during the U.S. Army Corps of Topographical Engineers' 1851 expedition to Arizona which was led by Captain Sitgreaves. Credit: British Library

She acknowledges there have been no DNA studies to confirm or refute her hypothesis, but she also points out striking similarities between these two cultures, such for example blood-group characteristics. Blood Type B is frequent in East Asian populations but nearly absent in most Native Americans. Zuni Indians, on the other hand, have a high incidence of Type-B blood.

The ancient Japanese- Zuni connection was born when Professor Davis one day came across a chart detailing the Chinese system of Yin Yang. Yin Yang symbol is widely recognized throughout the world. Still, the beginning and philosophy related to this ancient symbol originate in ancient China and the old beliefs of the Chinese people, who tried to understand the universe's workings. She discovered the Yin Yang symbol was remarkably similar to a chart on the Zuni religion. 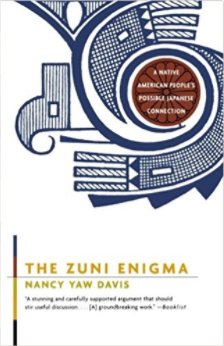 Next, she started to compare Zuni and Japanese languages and noticed a long list of nearly common words.

For more than 30 years, she searched for clues and pieced together her ideas. Her research resulted in a theory that her colleagues dismiss. She collected evidence based on biological links through blood type, tooth shape, skull configuration, and a prominent kidney ailment in Zuni and the Japanese. Professor Davis also discovered that both cultures had a mythology that embraced ocean images.

Professor Davis explains that the Japanese social structure suffered during the 11th or 12th centuries because of repeated natural disasters, including a series of earthquakes. During this time, Japanese sailors began to leave the country in successive waves.

One of the last of these waves of migration set sail around 1350.

Among the sailors were Buddhist monks who were searching for Itiwanna, the center of the universe. Based on her research, Professor Davis surmises that favorable currents landed the monks in California.

As the pilgrims moved eastward, they attracted Native Americans drawn to the notion of Itiwanna. Disparate clans united in a kind of search for Oz. In an area of what is now west-central New Mexico and east-central Arizona, just south of Chaco Canyon, they believed they had found their Emerald City. 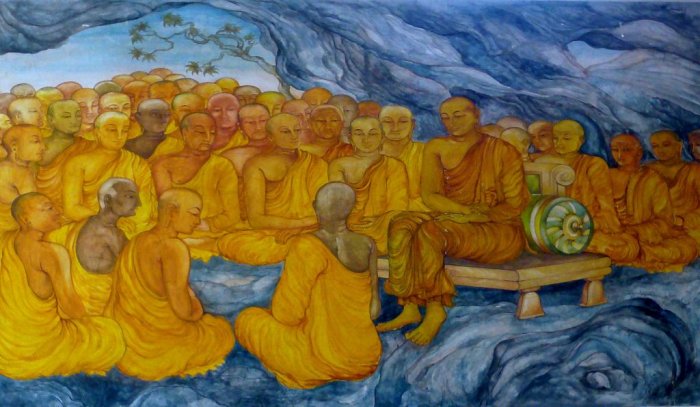 Did the Zuni Indians meet Buddhist monks in 1350? Credit: Wikipedia

The Zuni Indians' tribal name is A'shiwi (Shi'wi), meaning "the flesh." The name "Zuni" was a Spanish adaptation of a word of unknown meaning.

Professor Davis thinks settlers in the Zuni territory were an amalgam of Japanese, Anasazi, and A:shiwi.

Many scientists consider the Japanese- Zuni connection far-fetched due to the lack of archaeological evidence. The traditional idea is that Native Americans are descended from people who migrated from Siberia 12,000 years ago, traveling across the Bering Strait.

If the Japanese-Zuni theory is correct, it could easily re-write our history books. Still, much more evidence is needed before the scientific community will treat Professor Davis' ideas seriously.

Copyright © AncientPages.com All rights reserved. This material may not be published, broadcast, re-written or redistributed in whole or part without the express written permission of AncientPages.com