AncientPages.com - This beautiful 2,000-year-old vase is a true masterpiece of Iberian art. Discovered in Valencia, Spain in 134, the Iberian warrior still refuses to give up some of its ancient secrets.

The vase depicts a battle scene. There are six horsemen and two infantrymen armed with falcatas (the curved sword used by the pre-Roman Iberians) and spears pursuing four other warriors who are fleeing on foot while looking back with concern and protecting themselves with shields. The Iberian warrior vase can be seen until March 2018 in an exhibition at the Prehistory Museum of Valencia.

Archaeologists and the staff museum think it’s unlikely a beautiful work of art like this vase was used in daily life by ordinary people, but it’s possible it could have served to drink something in social rites or celebrations, such as the change of season or an aristocrat’s entry into adulthood. 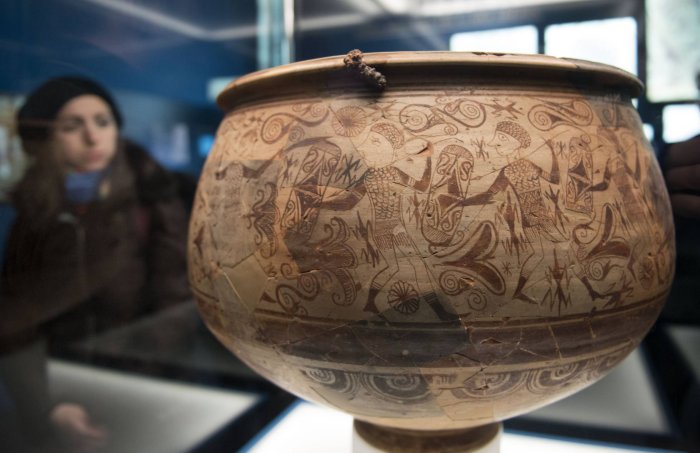 The vase of the warriors, dated between the second and third centuries BC, a masterpiece of Iberian art. JOSÉ JORDÁN

“Weapons had a social value that was lost in other historical moments,” says Jaime Vives-Ferrándiz, one of the two curators of the exhibition “The Enigma of the Vase” and curator of the Prehistory Museum, where the vase has been since it was discovered 30 kilometers from Valencia. “Today people are not usually buried with a weapon, but that was the case in those times. They also depicted themselves with their weapons.”

Mysterious Undeciphered Carvings And Script On Stela Of Montoro

Europe’s Oldest Time Capsule Discovered Inside A Statue Of Jesus In Spain?

The vase was discovered in an ancient building that may have been a temple of the elites of the old Iberian city-state of Edeta, the center of which was what is now the city of Llíria near the Mediterranean coast.

A drawing of the painting on the vase by Francisco Porcar in 1934.

There is also a mystery surrounding the fate of Edeta, one of the main Iberian city-states, whose dominion extended from the River Mijares in Castellón to the Júcar in Valencia. Archaeological analysis suggests that it was destroyed, perhaps by Roman soldiers, at the beginning of the second century BC, perhaps a generation or two after the vase of the warriors was created. “We know it was a violent episode because things were left there, there was no plan to abandon the site,” says Vives-Ferrándiz. “In other cases we can see when people have moved, but not here.”

The artist is unknown, but based on archaeological evidence scientists are certain the person also created the other pieces found in the building. The proper names that appear on some vases – along with other phrases that are not translatable as well as other clues – lead researchers to deduce that the objects were gifts.