AncientPages.com - Examination of rock carvings in Arizona and New Mexico, has led scientists to the conclusion that "Chinese explorers not only reached the Americas in pre-Columbian times, but that they interacted positively with Native populations, sharing both intellectual and cultural information." 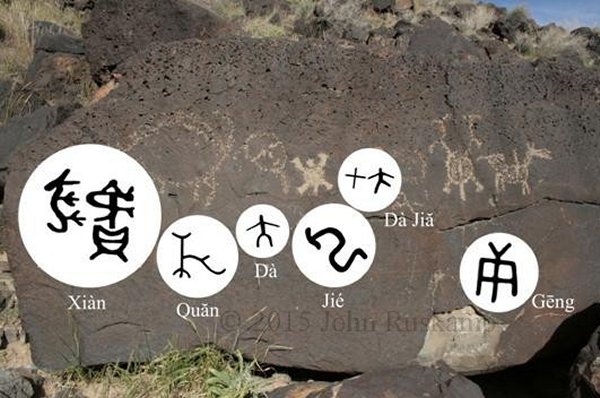 Some of the signs struck him as unusual and he decided to consult with experts on Native American rock carvings and compare them with symbols he remembered from ancient Chinese scripts.

His analysis has led him to believe that the sign carved on the rocks offer intriguing proof Chinese explorers visited this part of the world thousands of years ago. 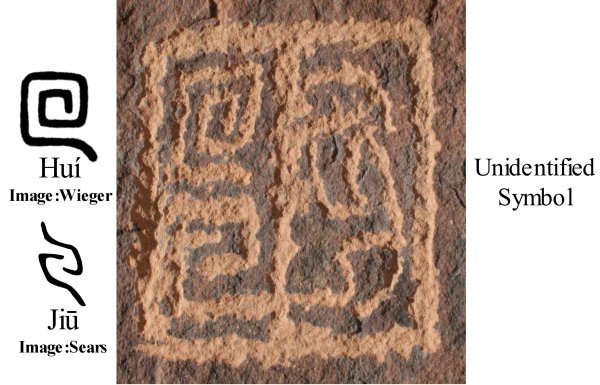 The inscription reads: (The) journey completed together - Image credit: John A. Ruskamp

Ruskamp discovered ancient written Chinese symbols of: Xiàn (to offer in worship to the deceased ancestors); Quan (dog); Dà (great); Jié (to kneel down in reverence); Dà Jia (the name of the third king of the Shang dynasty); and Gèng (the seventh Chinese Heavenly Stem). 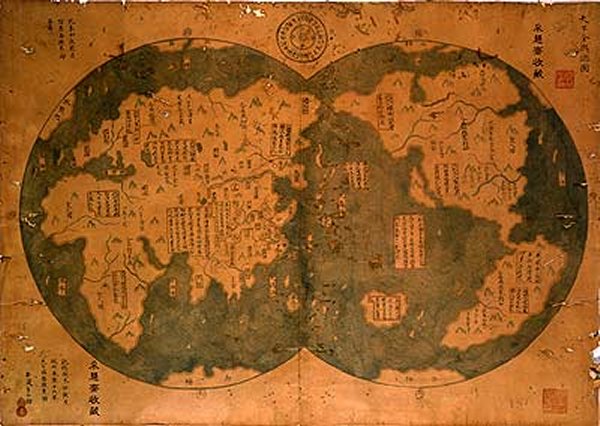 Ruskamp is not the only scientist who is convinced ancient Chinese visited North America. David N. Keightley, Ph.D. who was the first to recognize the name of the Shang king, Dà Ji, upon this boulder also confirmed that these petroglyphs have the form of Chinese scripts.

Additionally, Michael F. Medrano, Ph.D., Chief, Division of Resource Management for Petroglyph National Monument, personally evaluated the petroglyphs upon this boulder on November 13, 2013. With more than 25 years of experience working at the Monument with local Native cultures, upon viewing these figures, Medrano commented, "these images do not readily appear to be associated with local tribal entities," and "based on repatination appear to have antiquity to them."

According to Ruskamp, it is difficult to physically date petroglyphs with absolute certainly. Still, the syntax and mix of Chinese scripts found at these two locations correspond to what experts would expect explorers from China to use some 2,500 years ago.

A number of scientists have questioned the idea that Columbus discovered America. An ancient Chinese map, dated 1418 reveals that Zheng He, a Chinese admiral whose fleets roamed the oceans between 1405 and 1435 visited the continent before Columbus.

His exploits, which are well documented in Chinese historical records, were written about in a book which appeared in China around 1418 called "The Marvellous Visions of the Star Raft". 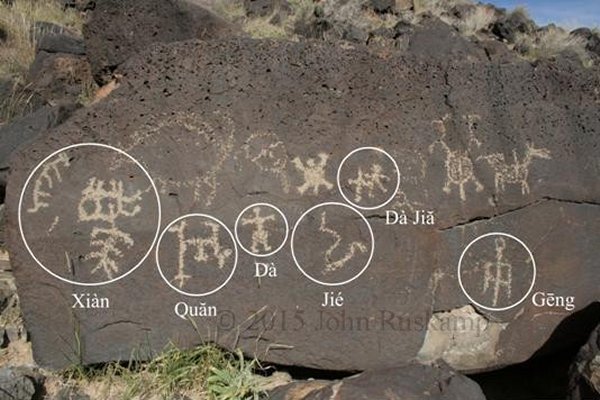 Six Chinese characters in the upper right-hand corner of the map say this is a "general chart of the integrated world". In the lower left-hand corner is a note that says the chart was drawn by Mo Yi Tong, imitating a world chart made in 1418 which showed the barbarians paying tribute to the Ming emperor, Zhu Di.

According to Gunnar Thompson, a student of ancient maps and early explorers, the map "will revolutionize our thinking about 15th-century world history."

Ruskamp's discovery of the Chinese symbols in Arizona and New Mexico has drawn the attention of other scientists. He will now present his finding on a meeting of the Little Colorado River Chapter of the Arizona Archaeology Society in Springerville, Ariz., on May 18. The editors of the journal Pre-Columbiana have confirmed they will soon publish Ruskamp's article.