AncientPages.com - About 3,500 years ago, an Egyptian goldsmith in Egypt spent his days producing remarkable jewelry dedicated to the Egyptian Sun God Amon-Re who was the most powerful deity at the time.

The royal goldsmith’s name was Amenemhat and he lived during the 18th dynasty (about 1567 B.C. to 1320 B.C.) Archaeologists have now unearthed his tomb in Draa Abul-Naga, a necropolis for noblemen and rulers near the Valley of the Kings, on the left bank of the Nile River.

Egyptian antiquities workers with three ancient mummies discovered in the tomb of Amenemhat, a goldsmith, at the Draa Abul-Naga necropolis near the Nile city of Luxor. Credit Mohamed Abd El Ghany/Reuters

The tomb is not one of the most impressive archaeological discoveries in Egypt, but it’s a significant find and important for marketing.

The tomb’s main chamber had statues of Amenemhat and his wife seated on chairs, according to Mostafa Waziri, the archaeologist who led the dig. One statue shows her wearing a long dress and wig. A smaller statue, discovered between the couple, depicts one of their sons.

The chamber also contained pottery, wooden funerary masks and ushabti figurines, which are small blue, black or white statues that ancient Egyptians placed in tombs to serve the dead in the afterlife.

It also included a burial shaft that had three mummies with skulls were exposed, and sarcophagi. 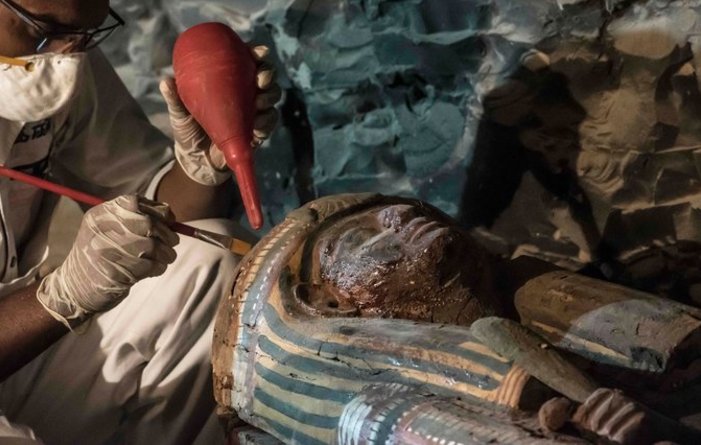 A wooden sacophagus was among the items unearthed. The niche dates to Egypt’s 18th dynasty New Kingdom era — about the 15th century BC, the antiquities ministry said. Credit Khaled Desouki/Agence France-Presse.

“We are not sure if these mummies belong to Amenemhat and his family,” Mr. Waziri said in an interview. “Others have clearly reused this tomb and poked around in ancient times. That’s probably why their heads are uncovered.”

He added, “But we are extremely happy anyway, because this means that we will find more tombs in this area.”

Over the years, scientists have discovered several mummies in the Draa Abul Naga necropolis.

Archaeologists also discovered another burial shaft just outside Amenemhat’s tomb, which contained three other mummies from a later period.