AncientPages.com - A 1.9-meter statue of a guard and part of a Medicine Buddha represent some of the finds revealed after 13 days of archaeological excavations conducted in Angkor Archaeological Park. 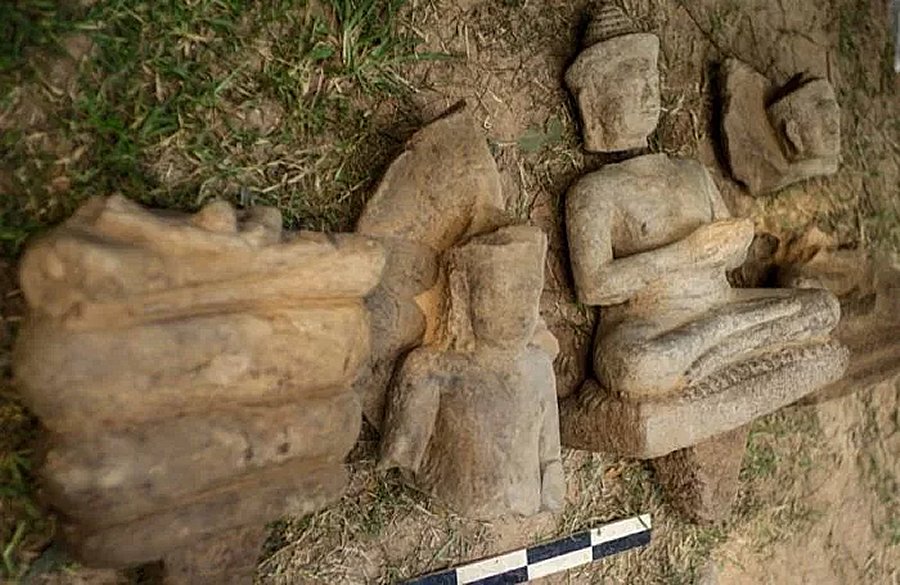 Now, one of the most important tasks for archaeologists is renovating the magnificent guard statue found on the second day of the dig on July 29 and analyzing soil samples to determine which medicinal plants were grown at the site where a hospital stood 800 years ago, during the reign of King Jayavarman VII.

It would have once stood in the hospital grounds, which are located next to the northern entrance of Angkor Thom, the walled city of the king.

Weighing about 200 kg and missing its feet and part of its legs, the sandstone figure was an unexpected discovery.

“Normally we find pottery, shards of different sizes…tiles and some metal objects, but this is special, unusual that we find statues,” said Im Sokrithy, an archaeologist with the Apsara Authority, the government agency that manages Angkor Park in Siem Reap province and which conducted the excavation. 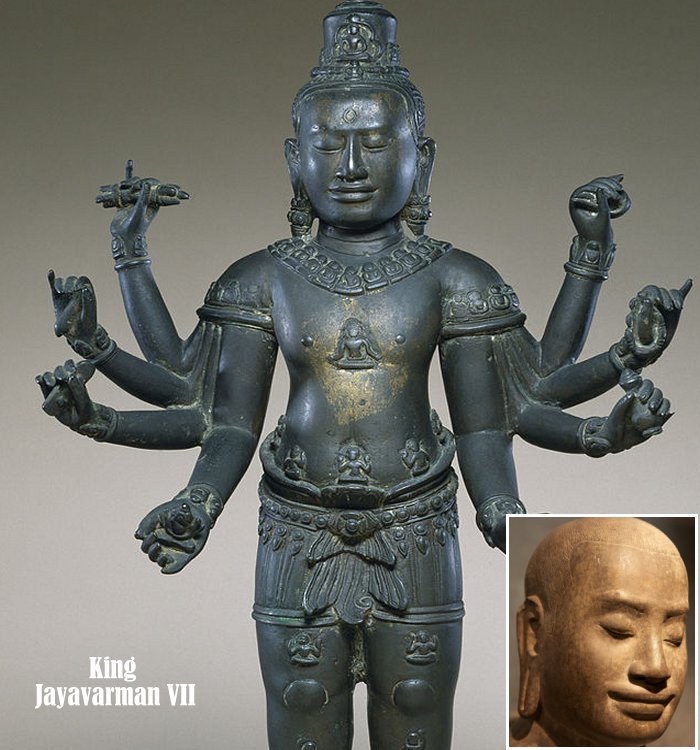 Jayavarman VII, was a king (reigned c.1181–1218) of the Khmer Empire in present-day Siem Reap, Cambodia.

Archaeologists also found traces of smelting, which might have been for bronze casting, according to archaeologists. The first statue was followed by another one, depicting a Medicine Buddha, which archaeologists identified from an object similar to a small pyramid in the palm of his hand.

Although hospital inscriptions from that era mention that a Medicine Buddha stood in the temple of every Jayavarman VII hospital compound, this is the first ever found.

“I had said we would hit gold if we found the statue of the Buddha. This is it, we hit gold,” said Dr. Rethy Chhem, an authority on Angkorian hospitals and medicine who served as adviser on the dig.

“The statue confirms that Buddhist medicine, whose techniques included pulse taking, was practiced eight centuries ago in Cambodia.”

Archaeologists also unearthed a large number of porcelain, roof tiles, Khmer ceramics and Chinese ceramics and further research needs to be done on Jayavarman VII hospitals, Mr. Chan said. Dr. Chhem agreed, if only to try to find out who used the hospitals, he said.

Jayavarman VII, (born c. 1120/25—died c. 1220), one of the most forceful and productive kings of the Khmer (Cambodian) empire of Angkor (reigning 1181–c. 1220). He expanded the Khmer Empire to its greatest territorial extent and engaged in a building program that yielded numerous temples (including Angkor Thom), highways, rest houses, and hospitals. Over the 30 some years of his reign, Jayavarman embarked on a grand program of construction that included both public works and monuments.

Historians have identified many facets in Jayavarman's intensive building program. In one phase, he focused on useful constructions, such as his famous 102 hospitals.