AncientPages.com - The discovery of Homo naledi some years ago, an extinct hominin species caused a sensation. Suddenly we had a new human ancestor that could re-write our history and fill in gaps in the evolutionary record. 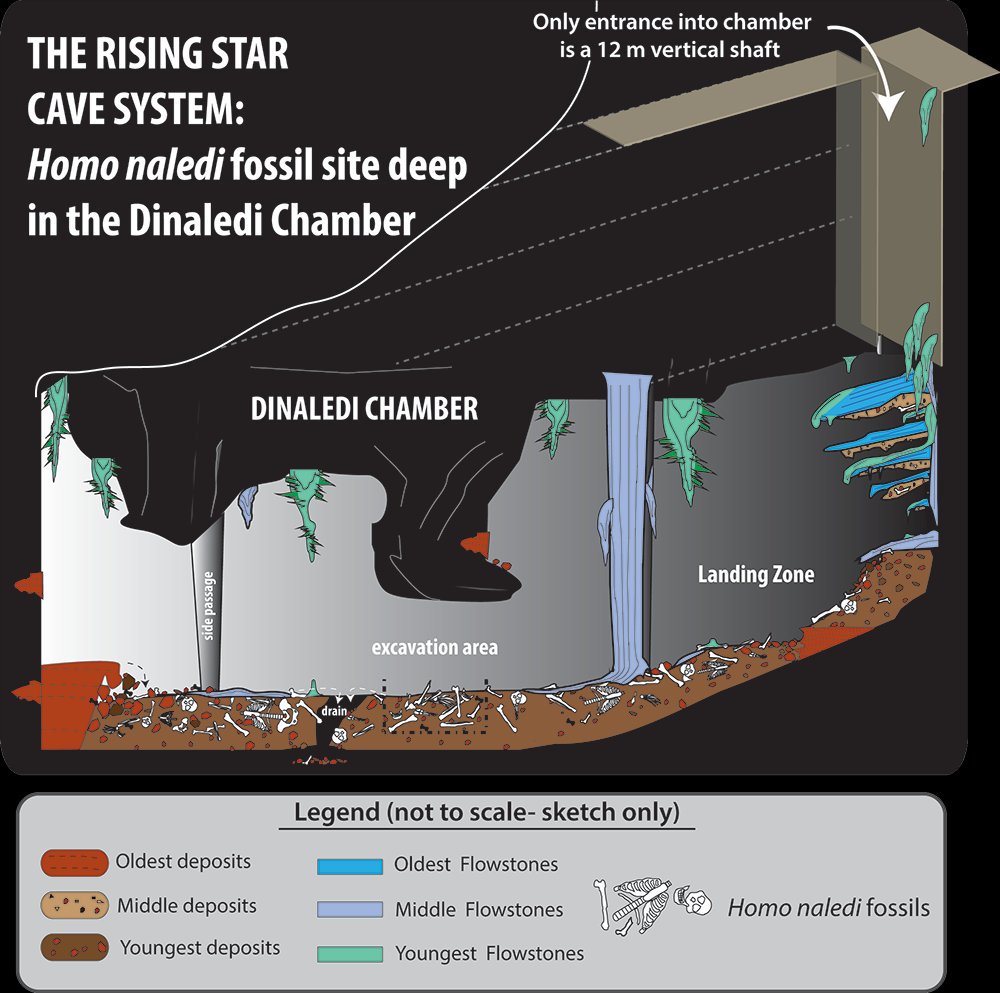 The team is also almost certain that the Dinaledi Chamber has always been in the ‘dark zone’ deep inside the caves, meaning there was a total absence of light. Image credit: EWN

The story becomes even more interesting when we learn that of Homo naledi was much younger than previously thought and may have lived alongside Homo sapiens as well as other hominin species, between 226,000 and 335,000 years ago. Even more intriguing is the fact that Homo naledi had small brain, one third the size of ours, and yet displayed surprising behavior that suggests great intelligence and possibly the first stirrings of culture.

As of 10 September 2015, fossils of at least fifteen individuals, amounting to over 1550 specimens, have been excavated from the South African cave system known as Rising Star.

The word "naledi" means "star" in the Sotho-Tswana languages. It, and the corresponding name Dinaledi Chamber ("chamber of stars"), were chosen to reference the Rising Star cave system where the fossils were found. 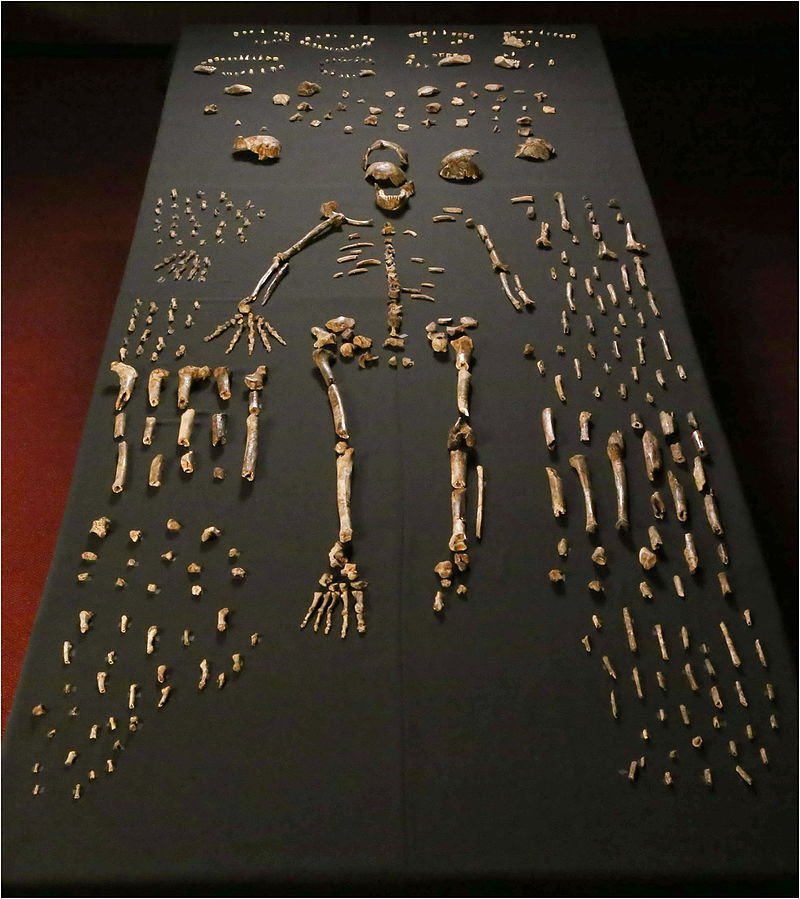 Dinaledi skeletal specimens. The figure includes approximately all of the material incorporated in this diagnosis, including the holotype specimen, paratypes and referred material. These make up 737 partial or complete anatomical elements, many of which consist of several refitted specimens. Specimens not identified to element, such as non-diagnostic long bone or cranial fragments, and a subset of fragile specimens are not shown here. The ‘skeleton’ layout in the center of the photo is a composite of elements that represent multiple individuals. This view is foreshortened; the table upon which the bones are arranged is 120-cm wide for scale. Image credit: Lee Roger Berger research team

An international team of researchers has now discovered another chamber with more remains of a newfound human relative, Homo naledi. The new chamber, dubbed the Lesedi Chamber, is nearly 100 meters from the Dinaledi Chamber where the first Homo naledi fossils representing at least 15 indivuduals of various ages were found.

The discovery of the new fossils representing the remains of at least 3 juvenile and adult specimens includes a 'wonderfully complete skull,' says anthropologist John Hawks at the University of Wisconsin-Madison.

According to researchers, remains of multiple individuals in a chamber some distance from the chamber containing the original Homo naledi fossils lends heft to the idea that Homo naledi was caching its dead -- a surprising behavior that suggests great intelligence and possibly the first stirrings of culture.

"This likely adds weight to the hypothesis that Homo naledi was using dark, remote places to cache its dead," Hawks observes. "What are the odds of a second, almost identical occurrence happening by chance?"

The new fossils come from at least three individuals -- two adults and a child -- and the researchers believe more will be recovered as excavations progress. The child, estimated to be under five years of age, is represented by bones from the head and body. Of the adults, one is identified only by a jaw and leg bones. 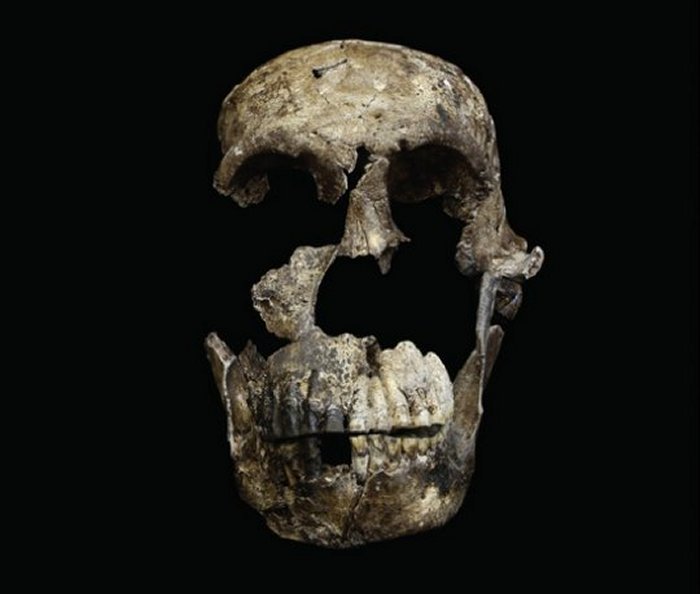 "Neo" skull of Homo naledi from the Lesedi Chamber is shown. Credit: Photo by John Hawks - University of Wisconsin-Madison

The skeleton of the third individual, dubbed "Neo" after the Sesotho word meaning "a gift," is remarkably complete. The skull has been painstakingly reconstructed, providing a much more complete portrait of Homo naledi.

"The skeleton of 'Neo' is one of the most complete ever discovered, technically more complete than the famous Lucy fossil given the preservation of the skull and mandible," explains Berger, the University of Witwatersrand paleontologist overseeing the Rising Star excavations. 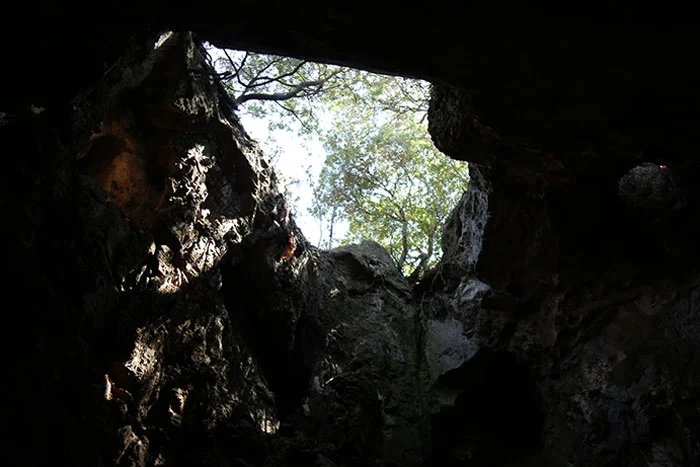 The discovery of remains of an ancient child, and a partial skeleton of an adult male with a remarkably well-preserved skull, adds evidence to support the idea Homo naledi discarded its dead in mass graves. There is evidence that Neanderthals made symbolic or ornamental objects, deliberately buried their dead. Sometimes they also marked their graves with offerings, and the Homo naledi appear to have developed this tradition as well.

"What is so provocative about Homo naledi is that these are creatures with brains one third the size of ours," Hawks says. "This is clearly not a human, yet it seems to share a very deep aspect of behavior that we recognize, an enduring care for other individuals that continues after their deaths. It awes me that we may be seeing the deepest roots of human cultural practices."

Previous studies of Neanderthals reveal our human ancestors were more intelligent than we expected.

Perhaps we are underestimating the intelligence of Homo naledi as well?