A. Sutherland - AncientPages.com - Jemdet Nasr - related to the Jemdet Nasr period (3100–2900 BC) - was a small but important prehistoric settlement in southern Mesopotamia, what is today, Babil located south of Baghdad, between the Euphrates and Tigris Rivers, Iraq. 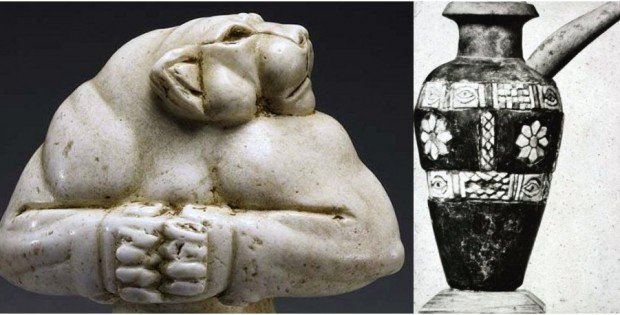 Excavations conducted in 1926 and 1928 revealed a large structure (92 × 48 m) constructed of both sun-dried and baked mud bricks, with clay roofing and ceramic gutters or drains. It had narrow rooms on three sides of a more open area, all resting on a brick platform. Additionally, more than two hundred inscribed clay tablets were found within the building.

Jemdet Nasr ("Small mound of Nasr") experienced breakthroughs in the development of art, urban culture, writing, trade, and irrigation technology, which increased its importance. During this period numerous small Mesopotamian settlements developed into major cities, and the earliest cylinder seals came into use in southern Mesopotamia. 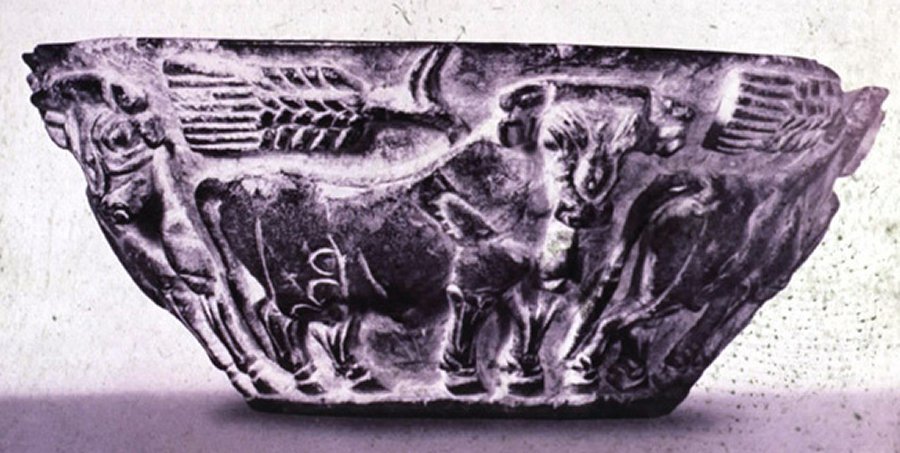 Steatite bowl with bulls in relief (5 cm. high). Found in a house of much later (Persian) times; dated stylistically to the Jemdet-Nasr period. Image credits: classics.unc.edu/

The main features of the Jemdet Nasr are copper objects and pottery (large jars, bowls, spouted vessels, and cups), usually painted black and red geometric patterns. Other pottery forms found at the site include painted pots depicting both geometric motifs and depictions of animals, including birds, fish, goats, scorpions, snakes, and trees.

The pottery and cylinder seals clearly mark the difference between the Jemdet Nasr period (circa 3100-2900 BC) Jemdet Nasr and the proceeding Uruk period.

The cuneiform tablets, second in age only to those discovered at Uruk, mostly deal with agricultural administration, and some are covered with seal impressions, of which one – the so-called “City Seal“ impression, contains symbols for many neighboring cities including Ur, Nippur, Zabalam, Larsa and Kesh, and accompanying inscriptions which suggest these cities were some kind of a league, possibly engaged in sending offerings to Uruk. 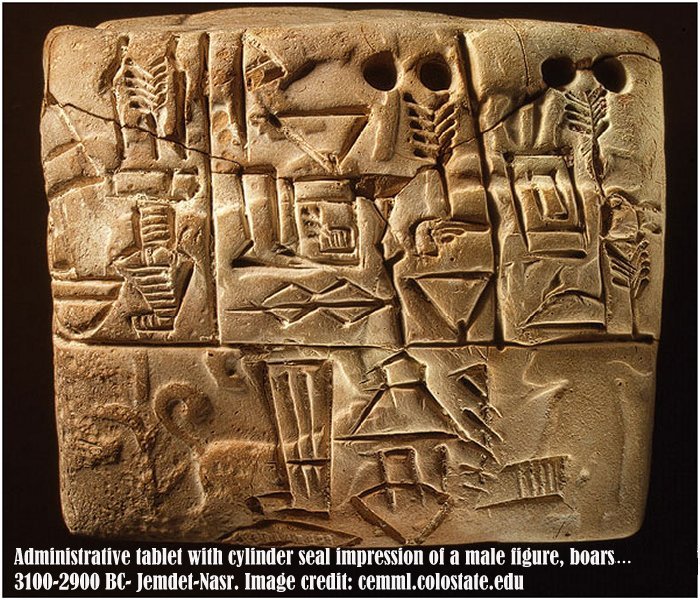 No evidence for far-reaching trade contacts, exotic goods or precious stones were found, but Jemdet Nasr must have had intensive regional contacts with several cities in southern Mesopotamia, including Larsa, Nippur, Ur, Uruk, and Tell Uqair. Power was concentrated in the hands of kings-priests and religion played an important role in the social life of the city. During the Jemdet Nasr period increased the number of cities, temples, and buildings.

Sophisticated irrigation techniques were used for growing plants, which was very important due to inadequate rainfall.

The production of bronze, an alloy of copper and other metals, mainly tin, allowed the production of new weapons, and fortifications around the villages and city walls were built for better protection.