AncientPages.com - Archaeologists uncovered remains of stairs near the foundations of a grand building where emperors 1,300 years ago performed special rituals in Japan's old capital Fujiwara-kyo.

Researchers said the stairs confirm the long-presumed design of the Daigokuden hall, a key structure in the sprawling Fujiwarakyu palace complex in the nation's first full-fledged capital from 694 to 710, modeled after the Chinese capital system–in Kashihara, Nara Prefecture, Japan.

The discovery was made on the south side of the Daigokuden hall, according to the Nara National Research Institute for Cultural Properties.

Today,  the ruins, designated as a special national historic site, was once an important place used by three emperors. 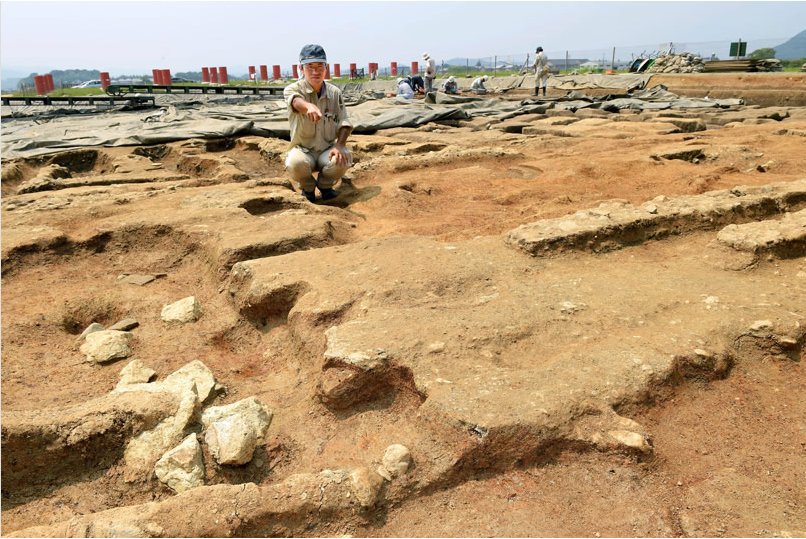 Vestiges of stairs leading to the south side of the Daigokuden hall in the ruins of the Fujiwarakyu palace in Kashihara, Nara Prefecture. (Ryo Kato)

“The discovery to a great extent backs up our longtime speculation over the scale of the Daigokuden hall,” said Masashi Kinoshita, professor emeritus of archaeology at Tokyo Gakugei University. “It is a significant find that could provide us with a detailed picture of the center of politics of the nation that was just formed.”

The stairs were located 5 meters from the center of the south face of the supporting platform of the Daigokuden hall.

Most of the carved tuff stones are gone, except for the parts that formed the base.

Archaeologists believe they formed a stairway measuring 5.2 meters from east to west and more than 3 meters from north to south.

They said the chances are high that two additional stairways--east and west--of similar construction existed side since tuff stones were also found 10 meters to the east from the central areas of the south side.

Previous studies suggest the Daigokuden hall was an imposing structure measuring about 45 meters from east to west and 20 meters from north to south.