A. Sutherland - AncientPages.com - Italy's famous City Park of Vulci (Vulci Archaeological Naturalistic Park) north of Rome has its ancient secrets but at the same time gives the opportunity to travel through time in order to reach the Etruscans - one of the most enigmatic civilizations in Europe.

In the park - one of the most important centers of Ancient Etruria in central Italy - located about 75 miles northwest of Rome, there is an Etruscan and Ancient Roman city, and necropolis of Vulci, Osteria.

One the recent diggings revealed an Etruscan tomb that dates from the late 7th century BC. 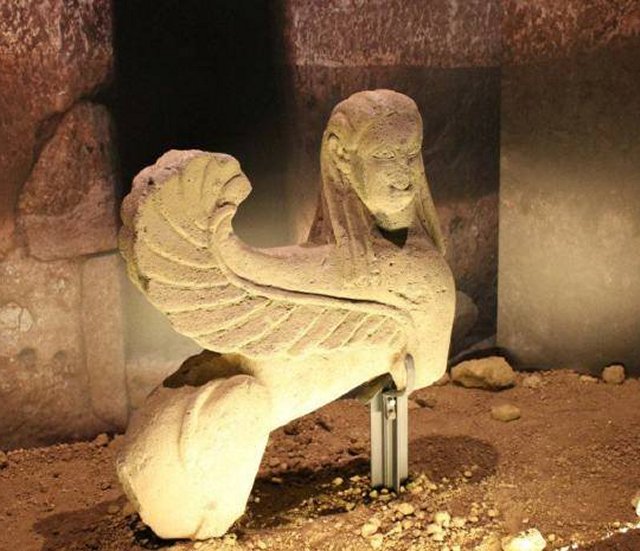 The Tomb of The Sphinx, Park at Vulci, Italy.

The tomb is believed to have been that of a woman. The grave goods buried with the body are all intact. Archaeologists discovered painted beads, an iron fibula ancient brooch, jars and a bucchero in a Corinthian style – a bucchero is a type of ceramic black pot with a glossy surface made by the Etruscans," reported Italy Magazine in spring 2013.

Archaeologists also unearthed an Egyptian scarab at the site. The scarab depicts the falcon-headed Egyptian god Horus and is thought to date from 746 BC to 525 BC. 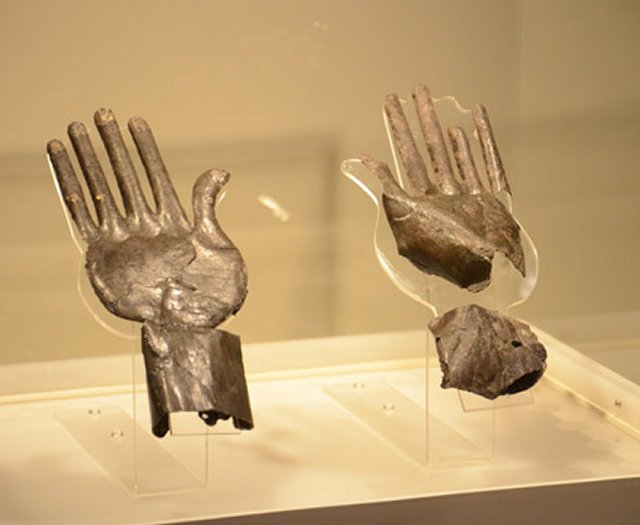 Several important discoveries have been made at Vulci. The necropolis, already known from the nineteenth century to the extraordinary funerary complexes brought to light, such as the "Tomb of the Sun and the Moon," the "Panathenaic", "Carved Ceilings" and a monumental burial, the "Tomb of the Sphinx", dating from the sixth century BC and unearthed at the end of the excavation. 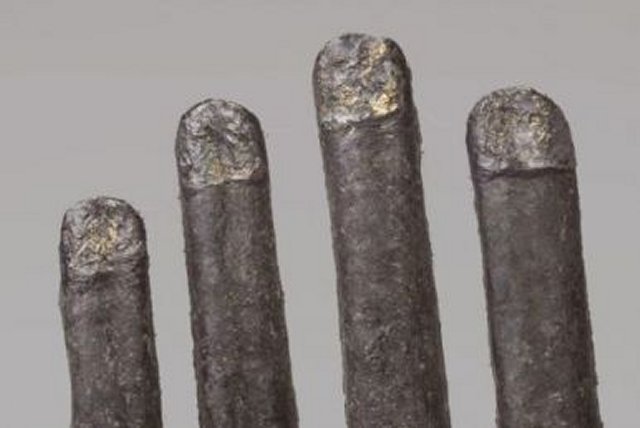 The magnificent sculpture in nenfro depicting a sphinx, probably placed at the entrance of the tomb in order to protect the deceased and accompany them in the Hereafter. 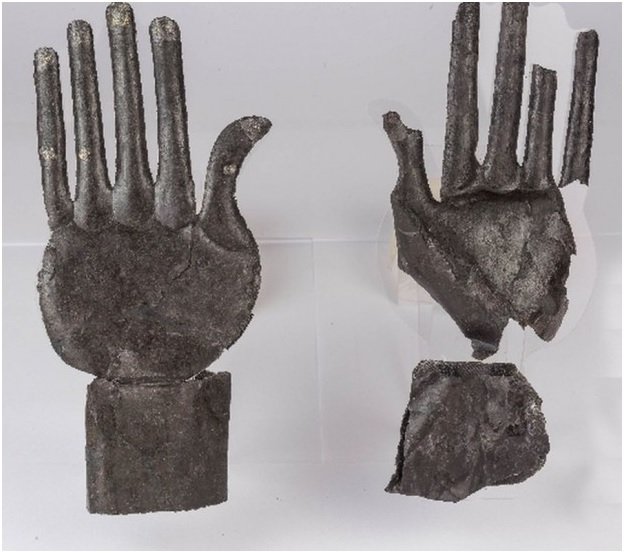 The head of a second sphinx, from another tomb in the necropolis, an initial restoration has allowed us to identify traces of the original red color. 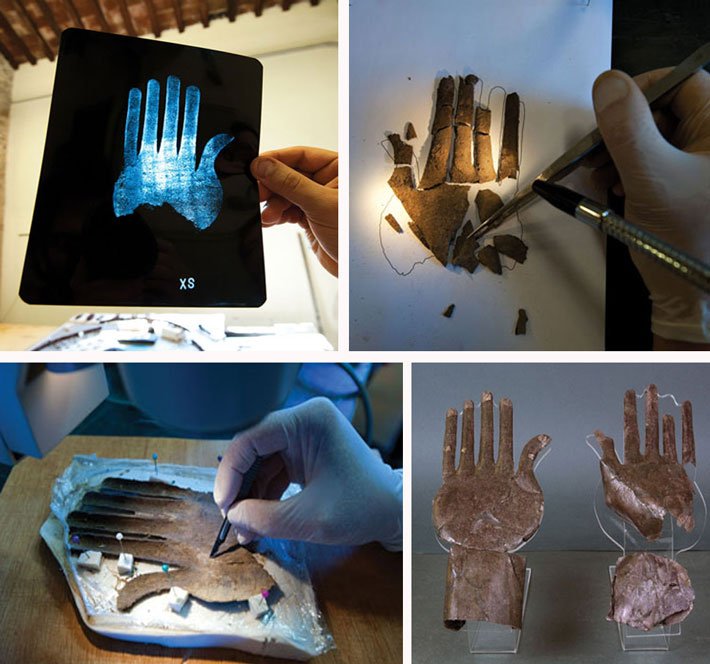 (Marco Merola)The silver hands were taken to a nearby laboratory. There (top row, left to right) researchers X-rayed them, fit the pieces of the right hand back together, and (bottom row, left to right) carefully cleaned the more intact left hand. The result: two completely restored and conserved hands. 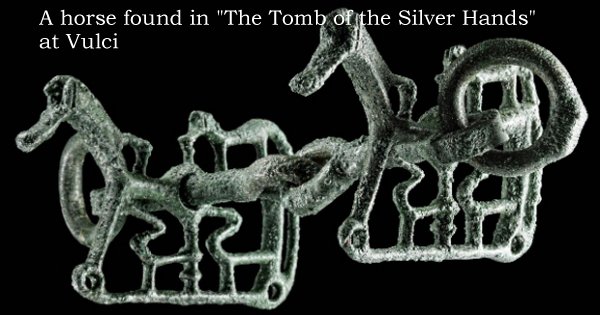 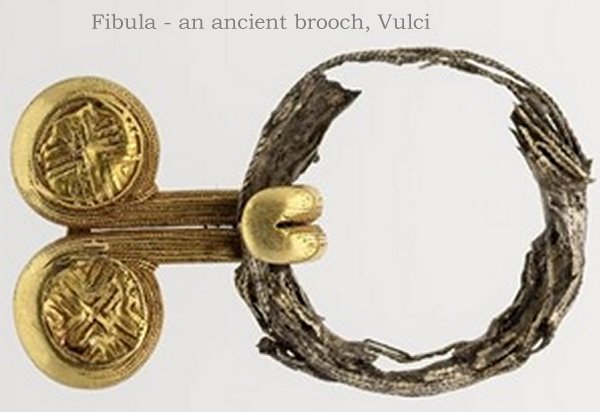 "Tomb of the Sun and the Moon" was the most important funerary complex in the area, and we know the area was open for visitors until the middle of the nineteenth century."

"But since then it has literally been swallowed up by nature." Three years ago, Casi and his team set out to rediscover the "Tomb of the Sun and the Moon" using topographic maps of the area, some of which were drawn in the nineteenth century.

"Unfortunately, we weren't able to find the tomb again, probably because the people who drew the maps of the area made some errors in locating it."

The Name Vatican And Etruscan Goddess Vatika Of The Underworld – What Is The Connection?

Tages: Etruscan Prophet Who Revealed Sacred Knowledge Before He Vanished

However, yet another archaeologists extraordinary discovery was made when scientists encountered a most spectacular place, namely, "The Tomb of the Silver Hands", a monumental place, with a long corridor with an atrium open to the sky and leading to three burial chambers that contained the remains of at least three individuals.

This tomb must have belonged to high-ranking members of the Etruscan society regardless of their gender.

A freelance journalist Marco Merola wrote in his article:

"While excavating Chamber A, Casi noticed something unusual lying on the ground among a variety of artifacts—two well-preserved silver hands with traces of gold on the fingers and gold-plated fingernails,"

“I knew immediately that these hands had once been part of a sphyrelaton, a kind of wooden funerary dummy that represented the dead and guarded his or her soul after the body had been cremated,” says Casi. Most often the dummy represented a warrior or a nobleman, but in this case the figure was probably a woman."

The rare and fragile "Silver Hands" gave their name to the tomb, made with a foil of an alloy of silver and copper embossed with a slight gold leaf applied on the nails of three fingers.

Near the hands on the ground, the archaeologists also recovered some purple threads that they believe were used to tie gold studs to a brightly colored garment that once clothed the dummy.

They also found iron and bronze fibulae, little gold balls, pieces of faience, and amber and bone beads that likely were once part of several very fancy necklaces..."