A. Sutherland - AncientPages.com - Today the Actun Tunichil Muknal (Cave of the Stone Sepulcher) is a national park and major tourist attraction drawing hundreds of people visiting this mysterious place every day. 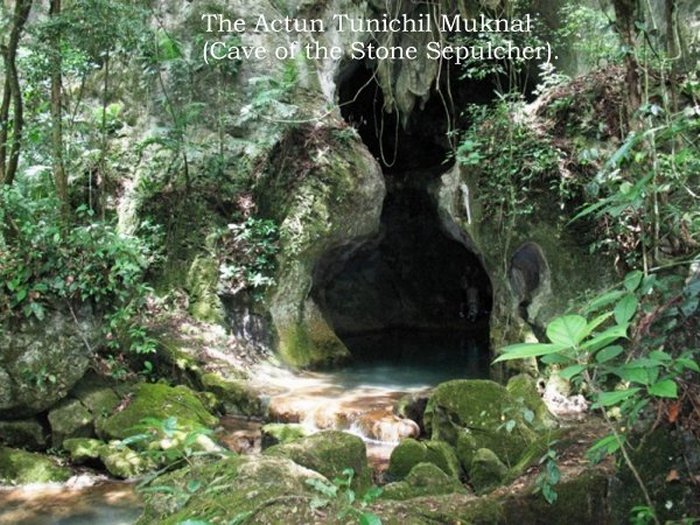 In ancient times, the situation was much different. This was a place where fear reigned and horrible events occurred. The caves of this region are carved into the limestone by the river Chiquibul and host a variety of cave creatures, as well as some sub-aquatic.

According to legend, the cave system Chiquibul was also the entrance to Xibalba, the Maya macabre underworld.

The Actun Tunichil Muknal, also known as "Xibalba" ("place of fear") is located in Belize, near San Ignacio, Cayo District. In this mysterious place, dwelled the most feared Mayan deities such as the Lord of Death and his evil helpers.

It was there that the rebellious souls were facing terrible trials of courage and vision, like a river of poisonous scorpions, jaguars house murderers, and a ball game played with balls made of rotating blades. 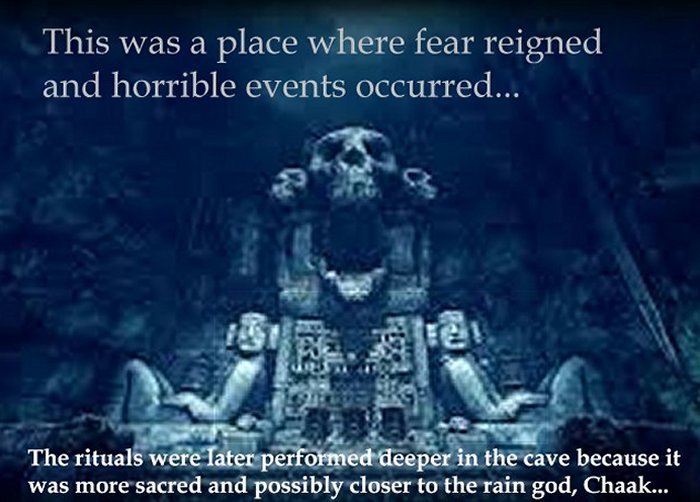 The Cave of the Stone Sepulcher was first entered by the Mayas in AD 300-600. It was not until the late AD 700-900 that the Mayas went deeper into the cave to perform their ceremonies and make sacrifices to appease the gods, and so, for a time, the Maya civilization flourished.

It was the underworld. The Popol Vuh clearly says that the sea and the underworld were distinct locations and that they were inhabited and ruled by very different kinds of deities.

The Actun Tunichil Muknal was officially opened to the public in 1998 when Canadian geologist Thomas Miller first reported the discovery of this cave. The main cave system is about 3 miles long and consists of a long river passage for approximately two miles, which ends at an upstream sump.

Inside the cave houses, there have been discovered found various types of artifacts from ceramics and stoneware to the remains of skeletons. The earliest artifacts occur near the entrance of the cave, while the later material occurs deeper within.

The archaeologists suggest that the Maya felt a need to perform their rituals deeper in the cave because it was more sacred and possibly closer to the rain god, Chaak. There are several areas of skeletal remains in the main chamber and the best known of them is "The Crystal Maiden". 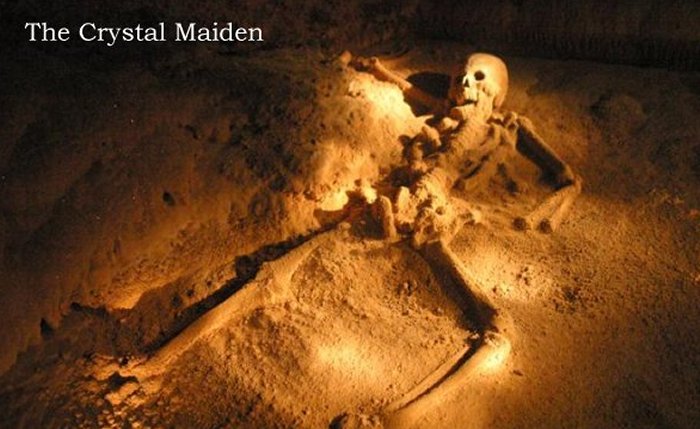 It is a skeleton of a teenage girl, possibly a sacrifice victim, whose bones have been calcified to a sparkling, crystallized appearance. She is unique in her positioning and the fact that two of her vertebrae are crushed.

Researchers believe she may have died in a particularly violent manner and then been thrown or tossed onto the ground, where she has lain for at least the last 1,100 years.

After having to lie on the cave floor for so long, she has now become a celebrity.

Deeper inside the cave, there are huge boulders and cavern-like rooms, of which one was named "The Cathedral". More than a thousand years ago, Maya performed ritual sacrifices to honor their deities. A large number of skeletons attest to this ritual.

The skeletons ranged in age from one year old to adult. These people died under horrifying circumstances, often having the entire skull crushed. 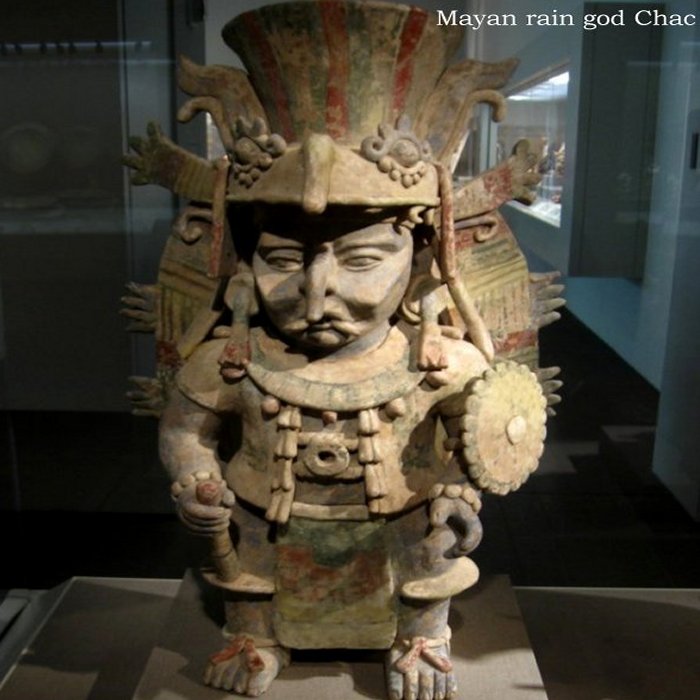 As horrible as it may sound in modern days, ancient people considered it an honor to be sacrificed to the gods. The Maya Indians believed blood sacrifice kept the cosmos in balance. It is unknown what the circumstances of the sacrifices were, though some believe they were to appease the rain god Chac, or possibly the gods of the underworld. Rain god called 'Chaak' or 'Chac'  (or many of them) was believed to live in caves and cenotes and brought various kinds of lightning and rains. The Classic Maya referred to the lightning bolt as 'chahuk', which is an old term but it has survived to modern times.

According to another theory,  human sacrifice practiced by ancient Maya in this kind of cave could include the so-called 'witches' suffering from some kind of mental or physical ailments. By leaving them unburied in the cave would ensure that their spirits were trapped there.

As seen in the Cave of the Stone Sepulcher, the Mayans modified cave formations. This was sometimes done to create altars for the offerings. On other occasions, the goal was to create silhouettes of faces and animals or to project a shadow image into the cave. The cave is extensively decorated with cave formations in the upper passages.