A. Sutherland - AncientPages.com - A few years ago, archaeologists unearthed a long sought wall in Jerusalem's ancient City of David. The wall is described in the Bible's Book of Nehemiah written between 445 and 420 B.C.

According to a story, Nehemiah, a high official in the Persian court of King Artaxerxes I at the capital city of Susa, was very troubled that there was no wall to protect his beloved city of Jerusalem, its walls and gates. 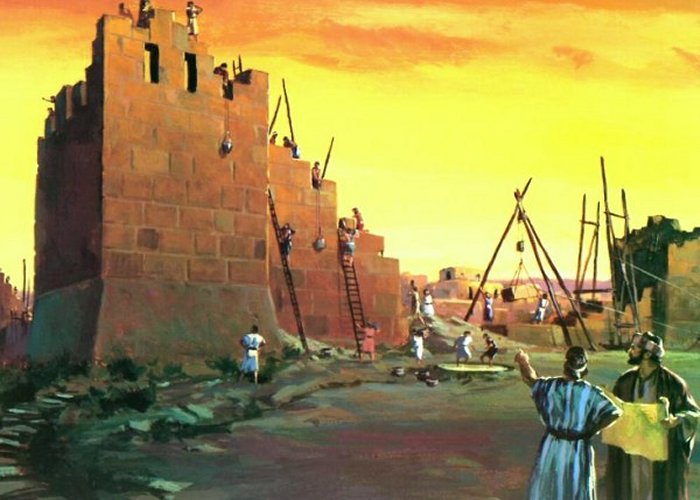 Now he could rebuild his beloved city of Jerusalem, its walls and gates.

Nehemiah 1:3,
"They said to me, 'Those who survived the exile and are back in the province are in great trouble and disgrace. The wall of Jerusalem is broken down, and its gates have been burned with fire."

When Jerusalem was destroyed by the Babylonians, Nehemiah went to the king Artaxerxes Longinus of Persia, and received a crucial for Jerusalem authorization.

Now he could rebuild his beloved city of Jerusalem, its walls and gates. Jerusalem had a chance to achieve its political restoration and again become a sovereign city-state. 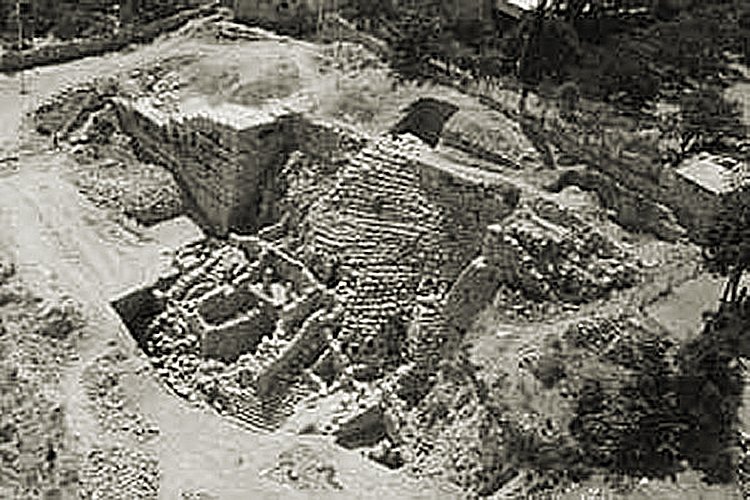 At the top of the eastern ridge of the City of David, Nehemiah and the returned exiles built a new city wall. Although they simply repaired the pre-existing walls elsewhere in the city, the wall just above the steep Kidron Valley was too damaged and too difficult to mend. So they relocated the eastern wall higher up the slope and, according to author Eilat Mazar, built it directly on top of a ruined wall of King David's palace (also known as the Large Stone Structure) and its massive rampart (known as the Stepped Stone Structure). Photo: Zev Radovan

He promptly made his famous night journey around the city, surveying the dilapidated city wall (Nehemiah 2:11–15).

He gathered all the men of Israel to rebuild the wall in just 52 days and the people of Jerusalem were deeeply inspired by him.

Nehemiah 2:18,
"And they said, Let us rise up and build. So they strengthened their hands for this good work..." They did their best to complete the wall in a remarkable 52 days, despite much opposition.

Nehemiah was able to accomplish this feat by assigning different sections of the wall’s rebuilding to various groups such as families, people from specific settlements, craftsmen’s guilds and so on (Nehemiah 3:1–32). Each section was denoted by specific public landmarks such as existing gates and other known structures. 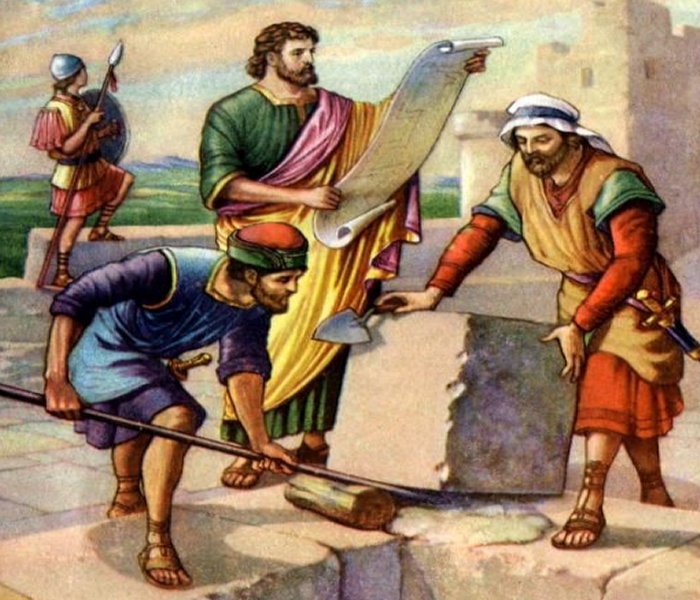 He gathered all the men of Israel to rebuild the wall in just 52 days and the people of Jerusalem were deeply inspired by him.

Nehemiah 6:15-16,
"So the wall was completed on the twenty-fifth of Elul, in fifty-two days. When all our enemies heard about this, all the surrounding nations were afraid and lost their self-confidence, because they realized that this work had been done with the help of our God."

In 2005, Dr. Eilat Mazar, of the Hebrew University and the Shalem Center, specializing in Jerusalem and Phoenician archeology, uncovered a small part of King David's royal palace constructed by King Hiram of Tyre, the contemporary Phoenician ruler and his ally against the Philistines.

Later, Dr. Mazar discovered an ancient, massive wall measuring 5 meters in width, located on the eastern side of the palace. Close to the palace wall stood a large stone tower where some pottery in form of arrowheads, shards and other artifacts was also found. 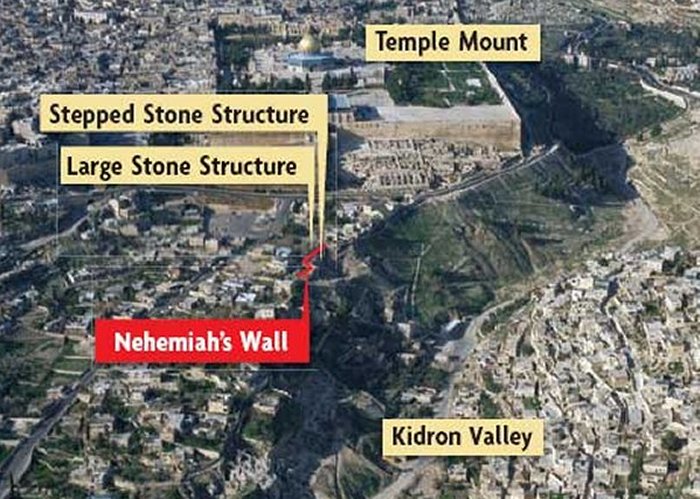 The aerial photo of the City of David and the Temple Mount locates Mazar’s excavation. A closer view of the area (taken before her excavation) clearly shows the well-known Stepped Stone Structure, flanked by the Northern (on the right) and Southern (on the left) towers. Connected to the Northern Tower, Mazar found Nehemiah’s wall and, near it, seal impressions of people mentioned in the Bible. Credits: Garo Nalbandian

"...Artifacts including pottery shards and arrowheads found under the tower suggested that both the tower and the nearby wall are from the 5th century B.C., the time of Nehemiah, Dr. Mazar, discoverer of the biblical wall from Nehemiah's time, said.

"The landmarks in the eastern wall were private homes, probably because here the wall was built higher up on the slope than the old wall, at the top of the crest rather than nearer the floor of the valley, where it had been before the Babylonian destruction.
True, the city became smaller this way (some of the old residential areas were now outside the city wall), but there were also fewer people living in the city, so there was no need for a big city."

2,500 years ago, Nehemiah worked very hard for his city of Jerusalem.

Today archaeologists in Israel work also very hard trying to unearth pieces of Nehemiah's great job, but perhaps what is most important, they try to achieve yet more important goal - to confirm the historical events in the Holy Bible.