AncientPages.com - Scientific breakthroughs can happen in the strangest ways and places. Alexander Fleming discovered penicillin because of mold growing on a Petri dish left out while he was on holiday. Chinese monks in the 9th century wanted to make a potion for immortality: instead, they discovered gunpowder.

Our own remarkable discovery happened on a rugged, remote stretch of coastline east of Still Bay on South Africa's Cape south coast. It was low tide, and three members of our ichnology team (people who study tracks and traces) were in search of newly exposed Pleistocene vertebrate tracksites in aeolianites (cemented dunes). 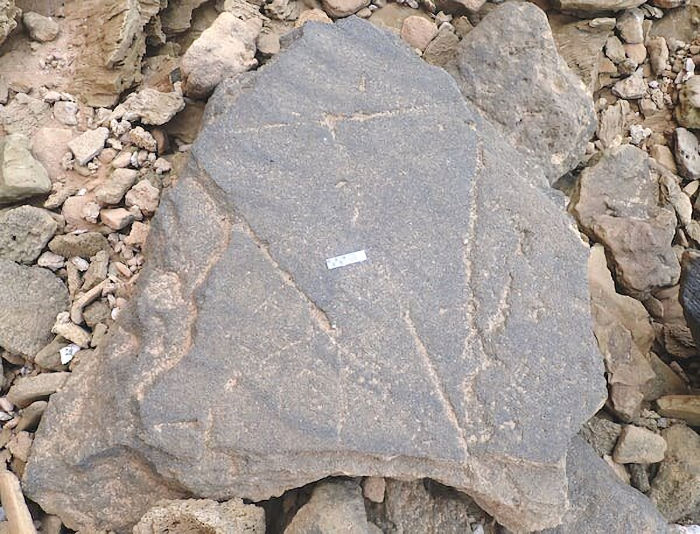 Ahead we saw a large rock that had tumbled down from the cliffs above. On its surface was a pattern of linear groove features in a large triangular shape, complete with an almost perfect bisecting groove. The sides of the triangle were close to a meter in length. After extensive research, we concluded that these grooves must have been made on a dune surface of unconsolidated sand by our human ancestors in the Middle Stone Age. The patterns are likely between 143,000 and 91,000 years old.

It was an important find in a significant place. Multiple lines of evidence on this coastline indicate that it's an area where our distant ancestors became truly modern, using fire as an engineering tool and creating abstract images.

But there was a problem. On a followup visit we found a smaller rock close by with a similar triangular feature. Subsequently, it was destroyed, likely by storm surges or high tides buffeting and overturning it. We knew that the larger rock inevitably awaited a similar fate if we did nothing. From our perspective this is one of the most important rocks in the world: it takes us back to our roots as a species and indicates the kind of "proto-art" we were capable of creating so long ago.

An unusual ‘rescue operation’ captured on video by Richard Webb.

The rock has subsequently been encased and placed on exhibit, with interpretive text panels. It joins similar exhibits in the museum; the grooves were an example of an ammoglyph, a term we had coined to describe a pattern created by humans in sand that is now evident in rock that has become cemented and then re-exposed.

Ascribing meaning to these geometric patterns made so long ago by our distant ancestors is not within our field of expertise. Still, we could not help but notice the resemblance of the triangular shape to a purported fertility symbol found in France and dated to around 38,000 years. Should the pattern on our rock represent the same motif, it would not be the first time that southern African discoveries had pushed back in time what has been viewed as an Upper Paleolithic Eurasian phenomenon. 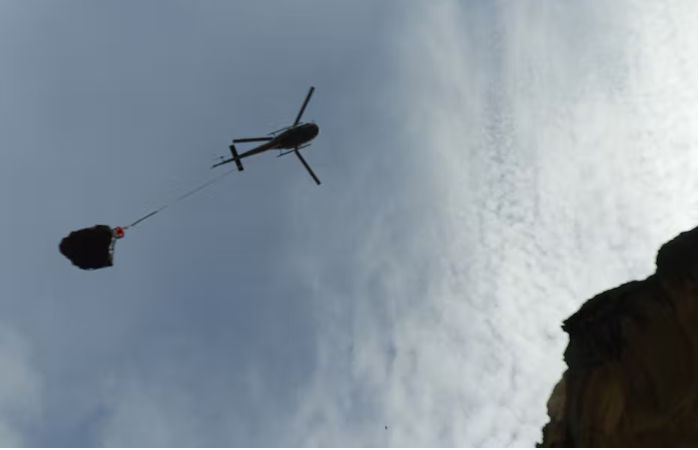 A helicopter, net and a long-line cable - as well as a skilled pilot - were key to the ‘rescue’ operation. Credit: Richard Webb

Our research team now sleeps better at night, knowing that this priceless piece of our human heritage has been recovered and is available for others to see, appreciate and critique.

Happily, there was an unexpected bonus. Beside the eroded remains of the second rock our ground crew noted a third rock surface which had not been evident previously. Near one edge it contained a distinct pair of grooves that met at an angle of 69 degrees, forming what may have been part of another triangular feature.

This is clearly an area we will return to repeatedly, in the hope that tidal forces may turn over other rocks before destroying them, and may give us an opportunity to glimpse—and perhaps recover—more ammoglyphs.

Provided by The Conversation