Jan Bartek - AncientPages.com - This ancient, huge ceramic jar is one of those artifacts produced for reasons modern scientists cannot understand, at least not yet.

The Iron Age jar was unearthed at Sharjah’s Muwaileh archaeological site in the United Arab Emirates (UAE). Archaeologists found it along with many either ancient objects made of ceramic and bronze, including a ceramic goblet and a domed incense cover featuring perforations, surmounted by a bull figurine. 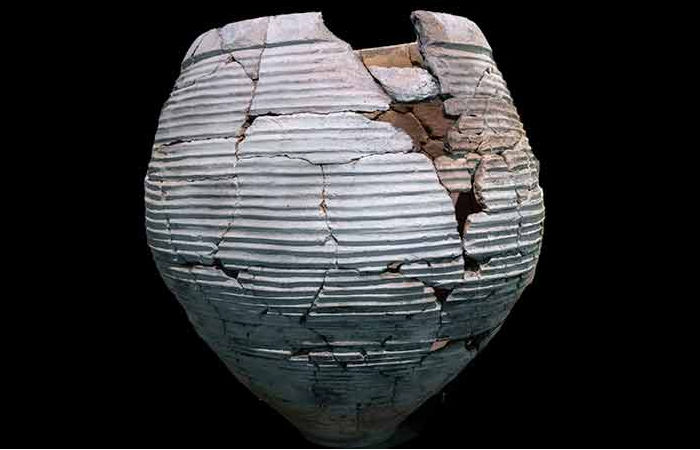 The latest archaeological find is a ceramic piece with three letters in Sabaean. This South Arabian language dates to the 7th century B.C.E and is the oldest language discovered in the UAE.

What makes the unearthed jar fascinating is its size and the fact that no one can figure out the vessel's purpose.

"The jar, whose function is still under deliberation by archaeologists, stands at 155 cm in height with a body diameter of 141 cm and a rim diameter of 94 cm. It was found inside a columned building measuring 10 x12 metres within a large, fortified settlement at Muwaileh. The archaeological site also includes many houses built of mud brick, similar to those found in other settlements of the period in the UAE.

Archaeologists believe the jar was made inside the hall, as it is larger than the doorways. Another theory suggests that it was created first, and then the hall was built around it. Surrounded by a number of annexes or rooms, the hall is the largest roofed building discovered at the archaeological site.

It perhaps served as the settlement’s executive and economic centre, a gathering place for the ruling elite or was used to welcome guests resembling the function of today’s majlis. Site excavations and analysis revealed that 20 date palm columns seated on stone bases were arranged in rows of four by five to support the large ceiling span.Two further storage jars were also discovered set into the hall’s floor, in addition to more than 30 small bridge-spouted jars found in an adjacent room, indicating it might have been a service room for the great hall," the Gulf Today reports.

In those days when Muwaileh was home to an Iron Age settlement, scientists think the site was much closer to an ancient lagoon. Scientists working at the site have discovered Muwaileh differs from contemporary settlements. At the center of the site is a large walled enclosure; inside it, several buildings were once used for living, habitation, and storage.

"Imported goods from Iran, Mesopotamia and Yemen are found throughout the settlement and these suggest the growing importance of trade, some of which was made possible by the then recent domestication of the camel. In the UAE this occurred no earlier than 1000 BCE. Contacts with Yemen were particularly important for frankincense. However, the discover of a three letter Sabaean inscription in the earliest writing yet discovered in the UAE, is also a result of contact with Yemen.

The settlement grew rapidly during the ninth and eight centuries BCE. At some stage after c. 750 BCE it was attacked and destroyed in a complete fire. This has been a fortunate circumstance for the archaeologists excavating the site: thousands of artifacts, animal bones and archaeobotanical remains have so far been recovered. Archaeologists will continue to work at Muweilah in the coming years to further investigate the life of people that lived in the Emirate of Sharjah 3000 years ago." 1

The puzzling ancient jar is currently on display at the Sharjah Archaeology Museum (SAM). "I invite everyone to see this one-of-a-kind artifact at our museum as it best demonstrates the beauty of discovery and the remarkable feat undertaken by dedicated archaeologists and conservators who spent years piecing together numerous fragments without initially knowing what the finished vessel would look like," Manal Ataya, Director General of Sharjah Museums Authority (SMA), said.

She added: “With seasonal expeditions over several years, the pieces were assembled and conserved to unveil the beauty of this enormous jar and its secrets.” Excavations in the area began in the 1990s, with an Australian expedition among the first to work on the site, followed by an American mission.

Relentless efforts of excavators have led to the discovery of numerous findings that help shed light on the lives of people of the UAE in the Iron Age (between 900 and 600 BCE), during which the Falaj irrigation system was developed to water crops, helping the establishment of villages near mountains.