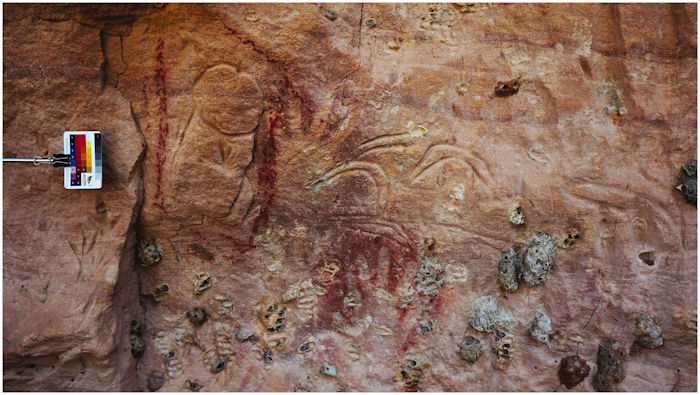 Engraved penis and boomerangs to the immediate left of the seven star-like designs interpreted as the Seven Sisters. The penis, outlined in red ochre, is interpreted by community Elders as referring to Wattanuri (Photo: P. Taçon).

Professor Paul Tacon and Dr. Andrea Jalandoni from the Griffith Center for Social and Cultural Research and Australian Research Center for Human Evolution began working with Iningai Traditional Owners and other institutions in September 2020 to study the various art works within the 160-meter-long rock shelter known as Marra Wonga near Barcaldine. 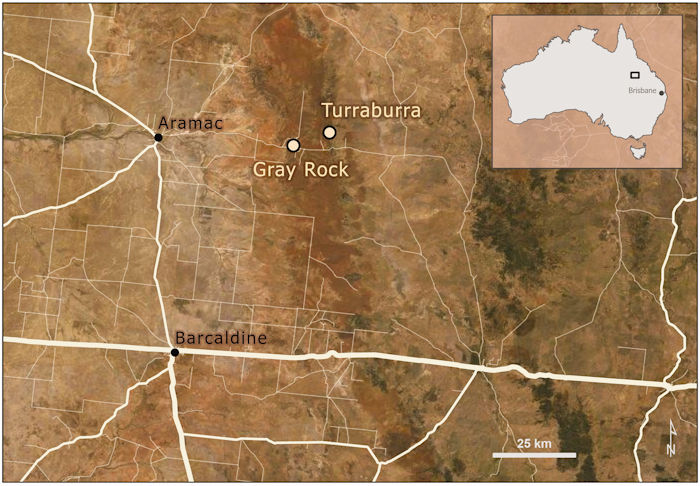 The team estimated the site contained more than 15,000 individual rock art works (known as petroglyphs), which consisted mostly of animal tracks, lines, grooves and drilled holes, as well as 111 hand-related and object stencils.

There was also a cluster of human-shaped foot petroglyphs on the floor of the shelter, some with six or more toes.

"Ten clusters of designs spread across the length of the engraved area of Marra Wonga appear to have been placed in a particular order, from south to north, although the designs were likely made at different times, with an accumulation of these clusters and other rock markings over time," Professor Tacon said.

"However, the order makes sense for contemporary Aboriginal community members as different parts of a Seven Sisters Dreaming story, in the correct sequence."

Seven Sisters stories the world over share many features including a connection with the Pleiades star cluster and the Orion constellation, the seven sisters being chased by men or a man, and sometimes a hunter and/or clever man associated with Orion, who loved and/or lusted after one or more of the sisters.

For Marra Wonga it is interpreted as being Wattanuri and there is an engraved depiction of him at the southern end of the site.

Some of the Seven Sisters stories have an unpleasant or violent side, but Professor Tacon said this depiction of the actions of the sisters and their pursuer in an ancient era of the Dreamtime led to the creation of landscape features across Australia that remain today. 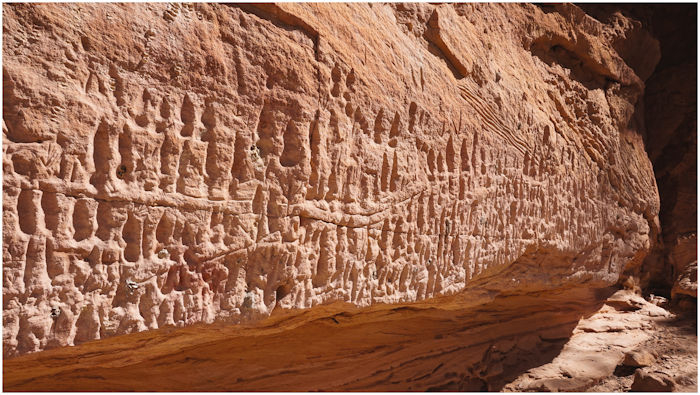 A portion of Marra Wonga with hundreds of petroglyphs including lots of macropod tracks (Photo: P. Taçon).

"All rock art sites have or once had stories associated with particular designs and the sites themselves, as well as the landscapes they are a part of," Professor Tacon said.

"But we know of no other rock art site anywhere in the world with a narrative that runs across the entirety of the site.

"It is very rare in the world today to have detailed ethnographic perspectives to sit alongside archaeological description, although in Australia we are fortunate that some remain strong, as with Marra Wonga."

The findings "Marra Wonga: Archaeological and contemporary First Nations interpretations of one of central Queensland's largest rock art sites" have been published in Australian Archaeology.