Conny Waters - AncientPages.com - Leiden archaeologist Wei Chu and colleagues report on recent excavations in Western Romania at the site of Românesti, one of the most important sites in southeastern Europe associated with the earliest Homo sapiens.

The site gives an important glimpse in how modern humans adapted to their new European environment.

So how did Homo sapiens cope with this new continent? The researchers found that artifacts at Românesti were geared towards producing highly standardized chipped stone bladelets that could have been used as inserts for arrows or spears. Peculiar grindstones might have also been used to straighten wooden shafts, suggesting that Românesti was a kind of a projectile workshop.

Thousands of artifacts, some of which come from over 300 km away, combined with evidence for onsite fire use demonstrate that Românesti was an important place in the landscape that was repeatedly returned to. Microscopic analyses of the artifact surfaces demonstrate that most of them were not used, suggesting that the site may have been used as a place for manufacturing tools that were later transported offsite 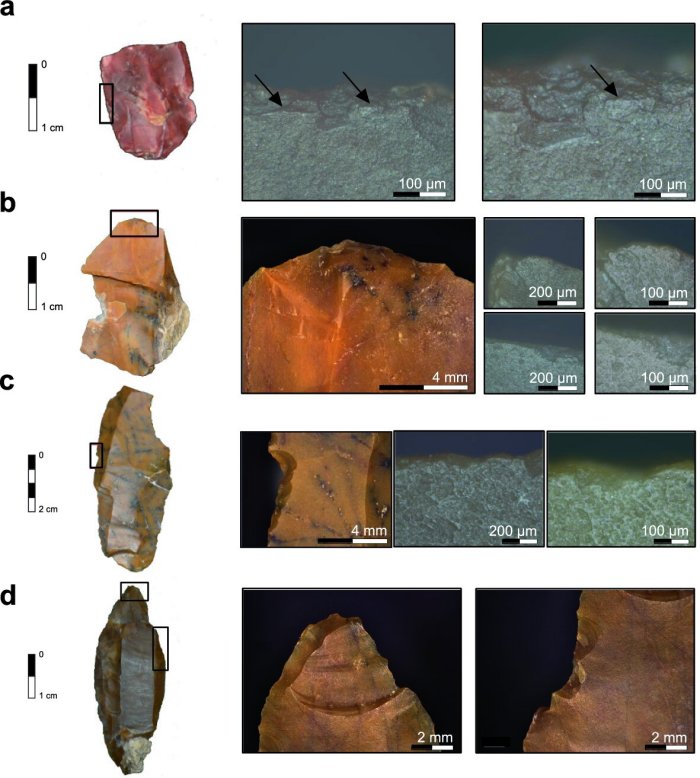 Use-wear traces found on lithic artifacts from Românești-Dumbrăvița I, GH3. (a) Localized microfracturing and compact polish of the lateral edge characteristic of hard animal material scraping (on the right side, 10 × and 20 × objective); (b) Abrasive polish and rounding of the distal end of the ventral surface characteristic for hide-scraping (on the right side, 10 × and 20 × objective); (c) Striated and extensive polish on the ventral surface of a steeply notched lateral edge characteristic of wood scraping (on the right side, 10 × and 20 × objective); (d) Macrofracture traces found on a lithic artifact. (left) spin-off fracture initiated on the dorsal distal tip on the lateral side with feather termination. (right) lateral ventral notching and edge scarring. Credit: Scientific Reports (2022). DOI: 10.1038/s41598-022-15544-5

The results of the large lithic assemblages and their high-quality contexts from the new excavations at Românesti indicate changes in the ways Homo sapiens subsisted compared to Neandertals, helping to explain their success.

The next step is trying to elaborate on what the relationship of these early Homo sapiens was to earlier Neandertals. Nearby contemporary fossils indicate that Homo sapiens and Neandertals were interbreeding, but we still don't know what that means for the ways in which their mutual lifestyles were changing and how we can see that in their archaeological remains.