The examples shown in the image include an owl, a toad, and a raccoon. The animals may represent the spirit guides of shamans who smoked the pipes to induce a trance state to assist with rituals of healing. Notice how the animal generally would be facing the shaman as he or she smoked the pipe. 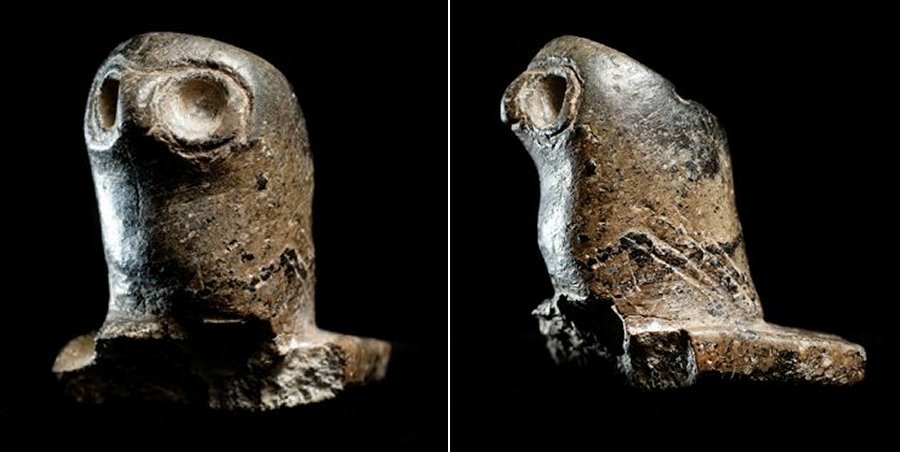 Most of the carved stone pipes from that era have been found in Ohio, where very large caches often containing more than 100 pipes were ritually broken, burned and buried. Photo credits: L. Brian Stauffer

In the early 1900s, an archaeologist, William Mills, dug up a treasure-trove of carved stone pipes that had been buried almost 2,000 years earlier.

Mills was the first to dig the Native American site, called Tremper Mound, in southern Ohio. And when he inspected the pipes, he made a reasonable – but untested – assumption. The pipes looked as if they had been carved from local stone, and so he said they were. That assumption, first published in 1916, has been repeated in scientific publications to this day.

But according to a new analysis, Mills was wrong.

In a new study, the first to actually test the stone pipes and pipestone from quarries across the upper Midwest, researchers conclude that those who buried the pipes in Tremper Mound got most of their pipestone – and perhaps even the finished, carved pipes – from Illinois. The research took more than a decade and during this time, the researchers collected the mineralogical signatures of stone found in traditional pipestone quarries in Illinois, Kansas, Michigan, Minnesota, Missouri and Ohio and compared the material found in those quarries to the mineralogical makeup of the artifacts left behind by the people of Tremper Mound. 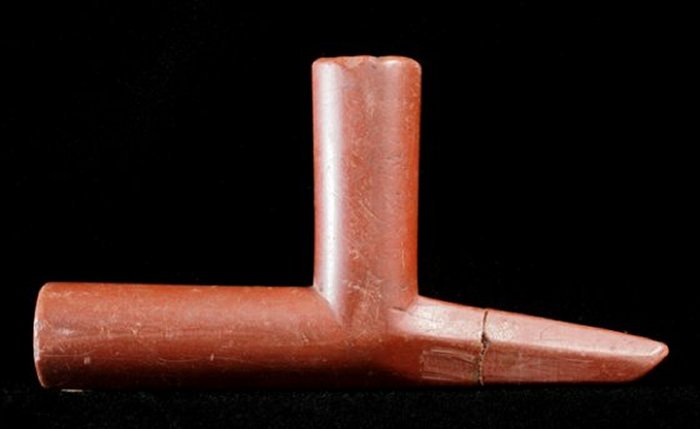 There is evidence of stone carving at the Illinois sources where the stone was gathered, but none at Tremper Mound, suggesting that the Illinois stone was carved into pipes before it was transported to Ohio. Photo credits: L. Brian Stauffer

Less than 20 percent of the 111 Tremper Mound pipes they tested were made from local Ohio stone. About 65 percent were carved from flint clay found only in northern Illinois and 18 percent were made of a stone called catlinite – from Minnesota.

The researchers are still puzzling over how most of these materials made it to Ohio from Illinois, and are baffled by another new discovery.

Pipes from a site only about 40 miles north of Tremper Mound, an elaborate cluster of immense mounds known as Mound City, were carved almost entirely from local stone.

Mound City was inhabited at about the same time or shortly after Tremper Mound, and the pipes found there are stylistically very similar to the Tremper pipes. 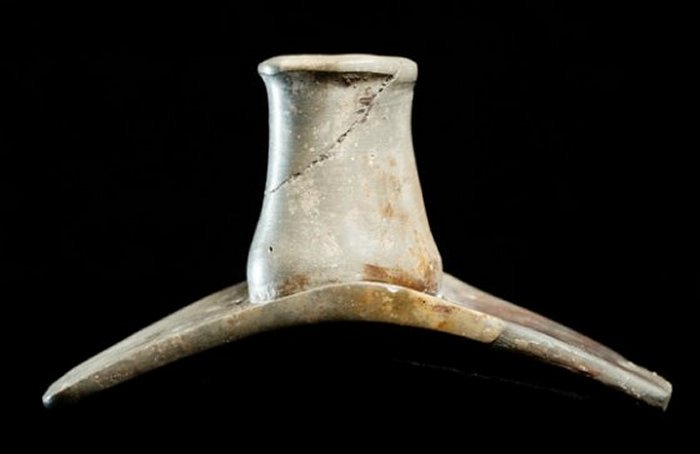 Less than 20 percent of the 111 Tremper Mound pipes they tested were made from local Ohio stone. Photo credits: L. Brian Stauffer

The researchers describe their findings in a paper in American Antiquity.

According to Thomas Emerson, the principal investigator on the study and the director of the Illinois State Archaeological Survey (ISAS) at the University of Illinois, these results should remind archaeologists that things are not as simple as they sometimes appear.

“This is how mythology becomes encased in science,” he said.

The study also confirms that the people who produced these pipestone artifacts, known today as members of the Hopewell tradition, were more diverse and varied in their cultural practices than scientists once appreciated, Emerson said.

The Hopewell people, who lived in the region from about 100 B.C. to roughly A.D. 400, have long been the subject of speculation, as the artifacts they left behind and the manner in which these goods were disposed of are not easily understood. Those living in southeastern Ohio, especially, seemed to be “conspicuous consumers and connoisseurs of the exotic,” Emerson said. 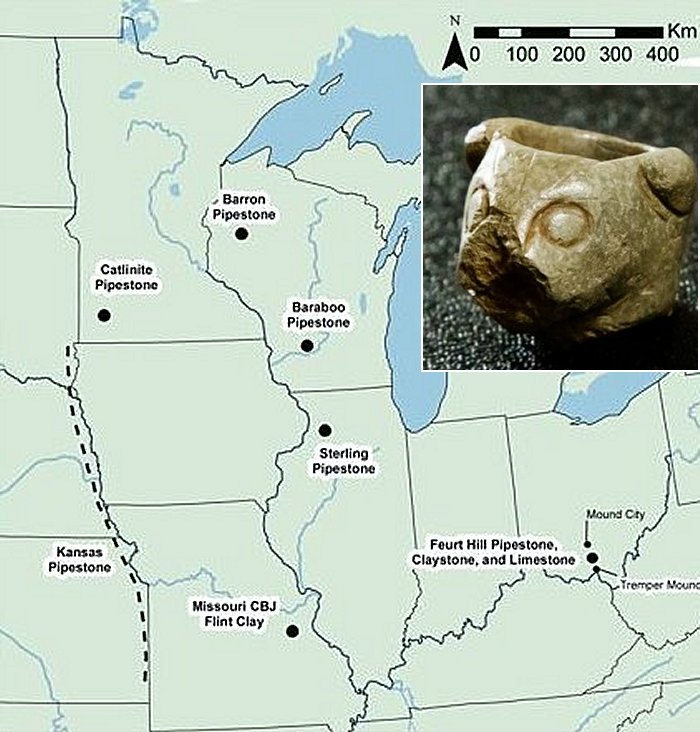 Locations where the owl pipes were discovered

The Hopewell people from that area collected “massive assemblages of obsidian from Wyoming, mica from the Appalachians, and caches of elaborately carved pipes, ” Emerson said. They also collected shells from the Gulf Coast, along with the skulls of exotic animals (an alligator, for instance).

Most of the carved stone pipes from that era have been found in Ohio, where very large caches often containing more than 100 pipes were ritually broken, burned and buried, Emerson said. The same style of pipes are found in Illinois, but many fewer have been uncovered in Illinois to date, he said, and they are dispersed, not heaped together in giant hordes as in Ohio. 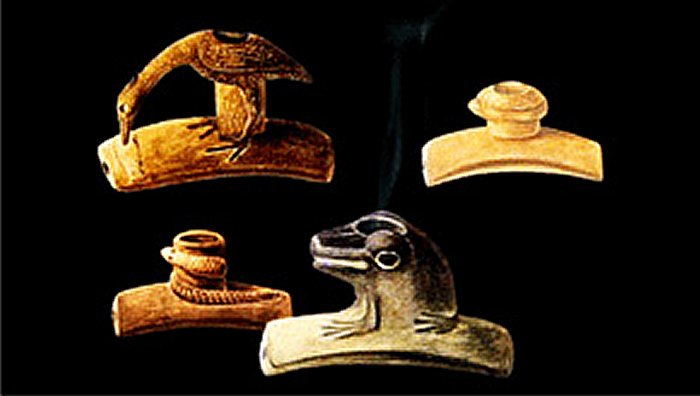 The team used a variety of techniques to analyze the material in the quarries and the artifacts. One method, called X-ray diffraction (XRD), produces a distinct signal that reflects the proportion of minerals in different types of stone. The stone must be pulverized, however, to subject it to XRD.

To analyze the intact pipes, the researchers used a non-destructive portable technology, called PIMA, which illuminates a specimen with short-wavelength infrared radiation and records the refracted (unabsorbed) wavelengths, allowing investigators to identify the minerals present. They verified the accuracy of the PIMA by comparing its results to those obtained with XRD on quarry specimens and broken pipes.

The new findings should challenge archaeologists to look more carefully at the evidence left behind by the Hopewell people, Emerson said.

“This study really says to the archaeological community, you need to go back to the drawing board,” he said. “You’ve been telling stories for decades that are based on essentially misinformation.”