Jan Bartek - AncientPages.com - A unique Indigenous artifact was accidentally discovered in a British Columbia backyard when Mark Lake, the owner of the property was cleaning up after a storm.

Lake was surprised to see something sticking out under his maple tree. When he picked up the object he realized he held a little piece of history in his hand.

The artifact is an ancient Coast Salish war club. Friends to Lake saw pictures of the club and told him to contact the K'omoks First Nation. 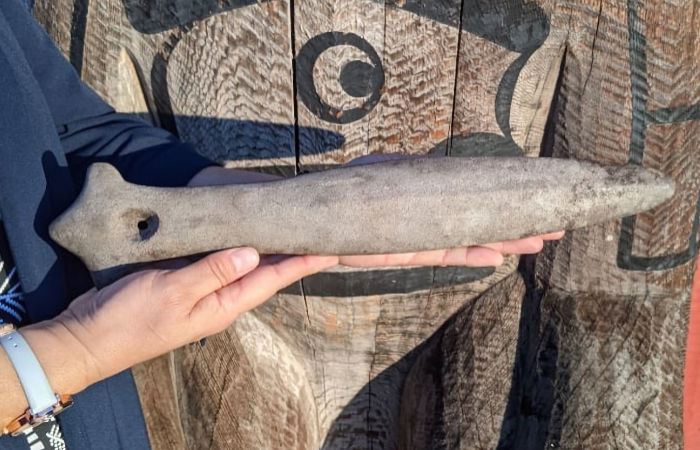 "The K'ómoks First Nation, also known as the Comox Indian Band, is the band government of the Island Comox or K'ómoks people of Vancouver Island, British Columbia. For thousands of years, indigenous people occupied the shoreline of eastern Vancouver Island in a place referred to as, "the land of plenty". This Land of Plenty stretched from what is known today as Kelsey Bay south to Hornby and Denman Island and included the watershed and estuary of the Puntledge River." 1

It turns out this is a rather unique ancient artifact.

"I've worked with various people repatriating artifacts since 2013 for our nation and I hadn't seen a piece like this, completely intact," Chief Nicole Rempel of the K'omoks First Nation told CBC News.

Rempel says the club is quite significant to the nation's culture and that it's always exciting when something can be returned to its "rightful place."

"It helps us understand more about our ancestors in the way that we live, the tools that we created," she said.

"It truly must have been a labor of love to have made something so intricate, and with so little tools, back in those times, so it really gives us a bit more information about who we were, who our ancestors were in the past," she said.

Lake is happy to have returned the artifact to the K'omoks First Nation and he hopes to learn more about its ancient history.

"They've been very open with exchanging any information they have gleaned on it as to its history and where it may have come from and so that's reward enough for us and we really enjoyed being part of the process," he said on CBC's All Points West.

Rempel says they are working with an archeologist to determine more about the artifact.

"We can do some geotechnical testing on the club, or geochemistry, which would figure out what kind of stone it was made of and what region it came from or whether it was traded," she said.

Rempel says what Lake did was commendable, as many people who find things like this don't always bring them forward.

"I just really encourage everyone that finds an artifact or ancestral remains for that matter to reach out to the local Indigenous communities because it's really just building our database of knowledge and identifying who we are and who we were," she said.