Jan Bartek - AncientPages.com - The human capacity for warfare and whether it is an inescapable part of human nature is a hot button issue at the heart of various disciplines like anthropology, archaeology, philosophy, and so on.

Researchers have posited a range of ideas about why humans engage in war, and the running list of various triggers for inter-group violence is long, be it the transition from hunting and gathering to agriculture, the development of weapons, ecological constraints, or population pressures. 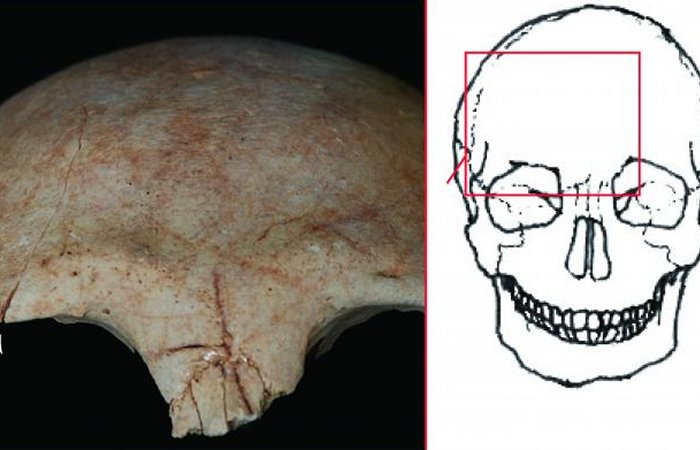 The trauma is slightly healed. However, because it seems to have been severe enough to have caused terrible damage to the person, it is likely perimortem (owned by Chikushino City Board of Education)

Among these, the population pressure hypothesis has become more prominent recently as people globally experience climatic changes and environmental breakdown. The hypothesis states that population increase can result in resource scarcity, leading to competition and conflict over resources. While there is wide acceptance of this claim, there are very few studies that have quantitatively backed up the origin of inter-group violence due to population pressure based on actual archaeological data.

To correct this gap, Professor Naoko Matsumoto from Okayama University and her team surveyed the skeletal remains and jar coffins, called kamekan, from the Middle Yayoi period (350 BC to AD 25 CE) in northern Kyushu, Japan. This region has been the focus of inter-group violence investigations because the skeletal remains in the Yayoi period indicate a significant increase in the frequency of violence compared to those living in the preceding Jomon period.

"The inhabitants of the Yayoi period practiced subsistence agriculture, in particular wet rice cultivation," says Professor Matsumoto. "This was introduced by immigrants from the Korean peninsula along with weapons such as stone arrowheads and daggers, resulting in enclosed settlements accompanied by warfare or large-scale inter-group violence. However, those living during the Jomon period were primarily pottery-makers who followed a complex hunter-gatherer lifestyle and had low mortality rates caused by conflict."

The results of the investigation were published in the Journal of Archaeological Science. The researchers uncovered 47 skeletal remains with trauma, in addition to 51 sites containing burial jars in the Itoshima Plain, 46 in the Sawara Plain, 72 in the Fukuoka Plain, 42 in the Mikuni Hills, 37 in the east Tsukushi Plain, and 50 in the central Tsukushi Plain, encompassing all six study sites. They found that the highest number of injured individuals and the highest frequency-of-violence levels occurred in the Mikuni Hills, the east Tsukushi Plain, and the Sawara Plain. Interestingly, the Mikuni Hills and the central Tsukushi Plain also showed the highest overall values for population pressure. Overall, statistical analyses supported that population pressure affected the frequency of violence.

Professor Matsumoto reasons there may be other factors that could have indirectly influenced such high levels of violence in the Middle Yayoi period. "I think that the development of a social hierarchy or political organization might also have affected the level of violence.

We have seen stratified burial systems in which certain members of the ruling elite, referred to as 'kings' in Japanese archaeology, have tombs with large quantities of prestige goods such as weapons and mirrors," she says. "It is worth noting that the frequency of violence tends to be lower in the subregions with such kingly tombs. This suggests that powerful elites might have a role in repressing the frequency of violence."

The evidence collected by Professor Matsumoto and her team undeniably confirms a positive correlation between population pressure and higher levels of violence and may help devise mechanisms to avoid seemingly never-ending conflicts in motion today. Further research based on these insights could identify other variables at play in determining the root causes of inter-group violence and actively prevent them.