Conny Waters - AncientPages.com - A group of marauding cannibals from South America descended on islands of the Caribbean circa A.D. 800, terrorizing local populations, as was suggested by the explorer Christopher Columbus (1451 -1506), an Italian explorer, and navigator who completed four journeys across the Atlantic Ocean, opening the way for the widespread European exploration and colonization of the Americas. 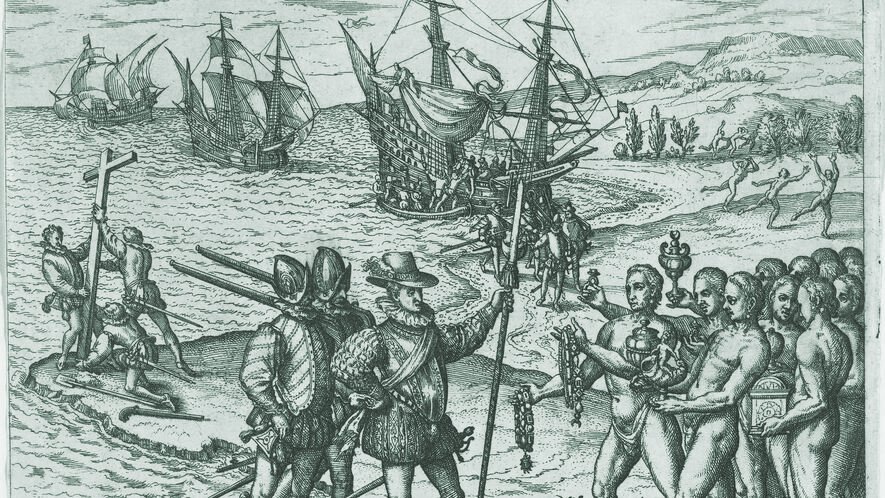 Engraving by Theodore de Bry in 1592 formed part of his America Series and showed Christopher Columbus landing on the Caribbean island of Hispaniola in 1492. De Bry published 25 books based on firsthand observations by explorers but never visited the New World. source

"It got a lot of people in our circle of scholars pretty interested and agitated," Scott Fitzpatrick, a professor of archaeology at the UO and associate director of the Museum of Natural and Cultural History said. "

We were disconcerted about the revitalization of the cannibalistic narrative, which is disingenuous and hurtful to Indigenous groups."

Led by Christina Giovas at Simon Fraser University, Fitzpatrick and Tom Leppard at Florida State University, a group of 10 scholars set out to rebut the paper's findings, which they found used flawed methods and analyses to draw its astonishing conclusions. Their response has just been published in the same journal, Scientific Reports, an online, peer-reviewed journal published by Nature.

The paper by Fitzpatrick and colleagues, known as a rejoinder, found the methods and findings in the original study were faulty to a fatal degree. The two lines of evidence cited by the original authors have "no basis in scientific fact," Fitzpatrick said.

"To use tenuous lines of evidence to bring back the idea of cannibalism is pretty ridiculous," he said.

The rigorous give-and-take is not uncommon in the academic world, where a controversial paper will draw a response from other scholars who use their own data to compare and contrast the original findings. But only rarely, Fitzpatrick said, are scientists given the opportunity to write a rejoinder that effectively refutes an earlier paper.

The original study suggested people known as Caribs, marauders and rumored cannibals from South America, invaded Jamaica, Hispaniola and the Bahamas circa A.D. 800, representing a previously unknown third wave of migration to the Caribbean. Previously, scholars had believed that Caribs never made it farther north than Guadeloupe.

To buttress their findings, the researchers used two lines of evidence. They examined cranial specimens to show similarities between Caribs from Venezuela and the people of Hispaniola, Jamaica and the Bahamas, and they compared samples of pottery from the different regions, again to show that Caribs migrated to the Caribbean.

In their rejoinder, Fitzpatrick and colleagues say the main weaknesses of the original paper have to do with the number, chronology and archaeological contexts of the examined skulls. To support the argument of a third wave of migration, the Caribbean skulls and the Venezuela skulls would need to be close in time and space.

But the four skulls from Venezuela in the first study are of unknown age, location and cultural affiliation, and they are unlikely to represent the biological diversity of the region. Overall, 85 percent of the cranial specimens examined by the original authors lack direct radiocarbon dates and can be assigned only to a 500- to 700-year range.

The original authors also argued that pottery from Hispaniola, Jamaica and the Bahamas is identical to pottery associated to the Carib expansion in the Amazon and Orinoco basins, but no archaeological evidence is provided to support the assertion.

Despite an archaeological record in the Caribbean that includes "quite a bit of skeletal remains," there is no evidence of any kind of cannibalism, Fitzpatrick said. Indigenous groups may have told Columbus their rivals were war-like and cannibalistic to curry favor with the Europeans, Fitzpatrick said.

The cannibalism trope was used by Europeans to legitimize their abuse of Indigenous peoples, Fitzpatrick said. Scholars have worked to debunk the theory, he said, which is why he was surprised to see the new study revive the idea that "Indigenous people were running rampant through the islands eating each other."

"These old tales have no basis in scientific fact, the tools they're using to explain this have no merit, and their erroneous suggestion of cannibalism is harmful to populations living today who are of Carib descent," Fitzpatrick said.