AncientPages.com - The ‘Standard of Ur’ is a Sumerian artifact excavated from what had been the Royal Cemetery in the ancient city of Ur (located in modern-day Iraq south of Baghdad).

This enigmatic artifact is a small trapezoidal box (8.5 inches high by 19.5 inches) long and was probably the decorated soundbox of a musical instrument.

It’s approximately 4,500 years old and was probably constructed in the form of a hollow wooden box with scenes of war and peace represented on each side through elaborately inlaid, figurative and geometric mosaics made of pieces of shell, lapis lazuli, and red limestone set into bitumen. 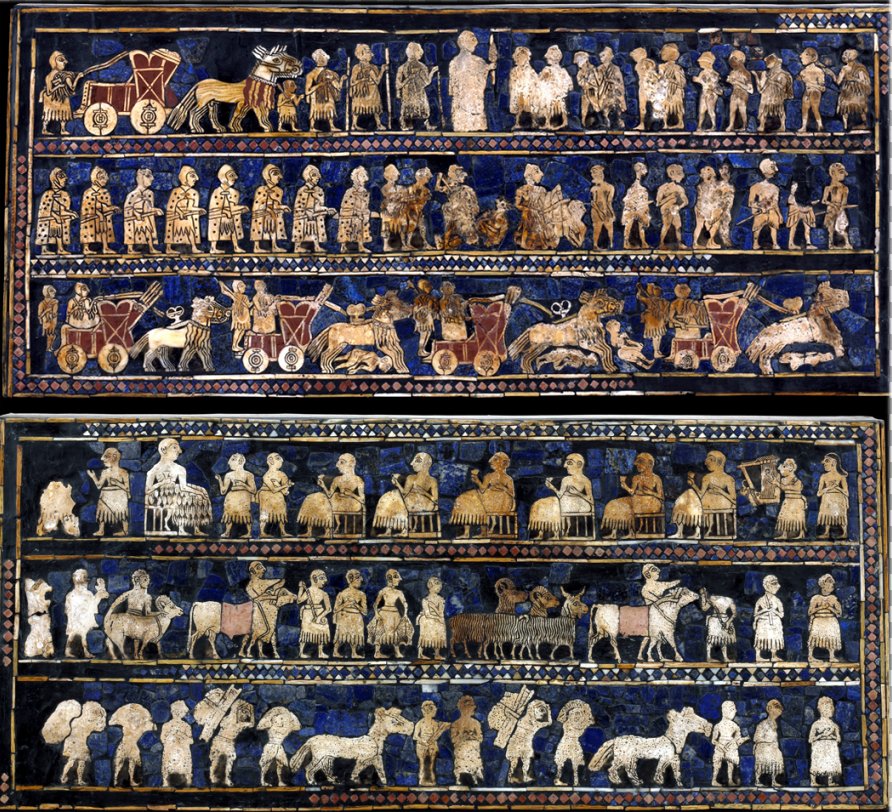 Sumerian ‘The Standard of Ur – ‘War And Peace’. Photo credits:  Penn Museum

The ‘Standard of Ur’ was found by Sir Leonard Woolley during excavations in Mesopotamia in 1927-28, in one of the largest royal graves at Ur (tomb PG 779) next to the skeleton of a ritually sacrificed man who may have been its bearer.

The tomb is associated with Ur-Pabilsag, a king who died around 2550 BC.

Woolley imagined that the ‘Standard of Ur’ was carried on a pole as a standard, hence its common name. Another theory proposes that it formed the soundbox of a musical instrument.

The mosaics on the Standard depict life in early Mesopotamia. The two sides, dubbed the “War Side” and the “Peace Side,” tell a story read from bottom to top.

'War' shows one of the earliest representations of a Sumerian army. Chariots, each pulled by four donkeys, infantry is protected by leather helmets, capes, and shields; enemy soldiers are equipped for close-quarter conflict, or killed with axes.  Another group of soldiers (probably prisoners) are paraded naked and presented to the king who holds a spear or a stone-headed mace.

The 'Peace' panel depicts animals, fish and other goods brought in procession to a banquet. Seated figures, wearing woollen fleeces or fringed skirts, drink to the accompaniment of a musician playing a lyre.

The ‘Standard of Ur’ is at the British Museum.