In May, the researchers found the gilt-bronze shoes and coin-shaped gilt-bronze accessories in the same tomb. 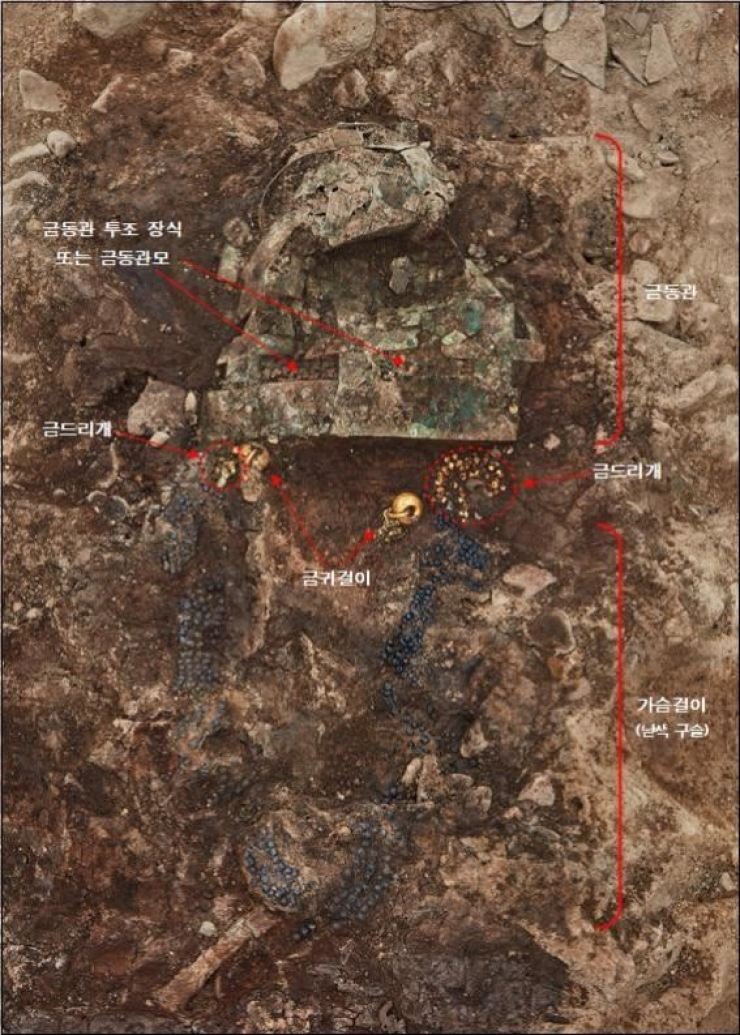 Gyeongju, the capital of the kingdoms of Old Silla (57 B.C.–676 A.D.) and Unified Silla (676–935), is covered with impressive mounds of royal tombs. This royal tomb complex is located some 371 kilometers southeast of Seoul. Their occupants were kings, queens, and princes who were nobles and represented the inner circles of power. From the time of their construction, these tombs have symbolized political authority and cultural splendor.

The excavation was part of a project between the CHA and the Gyeongju city is focused on the restoration of major historic ruins linked to the capital of the Silla dynasty.

Recent finds at the site include a small gilt-bronze coronet, gold earrings, bracelets, a silver ring, and silver belt, and a beaded chest lace, or a piece of regalia worn across the chest and shoulders. The outer band of the coronet, which features three tree-like branches and has two antler-like prongs, is decorated with heart-shaped holes and jade and gold marbles. A bracelet worn on the right wrist is made of more than 500 tiny yellow beads. 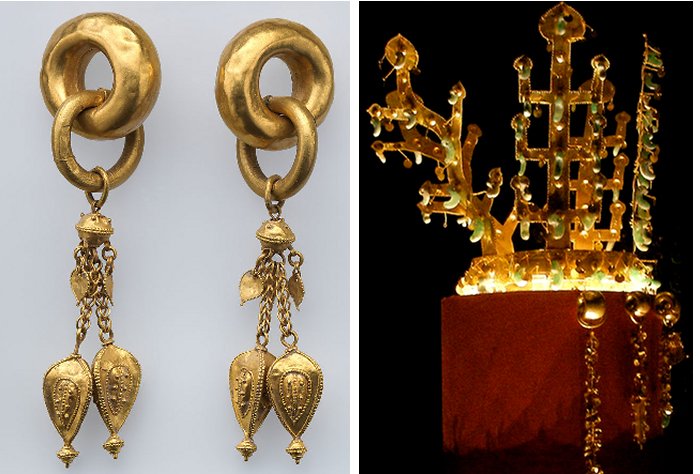 For now, it is not yet determined the sex of the deceased, who stood about five feet, seven inches tall, according to South Korea’s Cultural Heritage Administration, reports The Korea Times.

However,  a full set of accessories ranging from a gilt-bronze coronet to shoes that have recently been discovered from a tomb, the researchers believe it was created 1,500 years ago, and left as they were worn by the deceased at the time of burial.

The CHA announced that it is the first time that a full set of ornaments of a buried person has been excavated from a Silla-era tomb since the early 1970s.

The deceased buried in the Hwangnamdong Tumulus No. 120-2, presumed to be either an aristocrat or person of royal blood, wore a gilt-bronze coronet, a pair of earrings, and a pair of gilt-bronze shoes, according to the CHA. A chestlace, belts, bracelets, and rings were also found at the same time.

According to researchers, the gilt-bronze cap-like coronet features three tree-like branches and two antler-like prongs, with the outer band decorated with heart-shaped holes and jade and gold marbles.

Along with a pair of gold earrings and a beaded chestlace, the person also carries a silver belt and a handful of silver bracelets and rings. One bracelet on the right wrist is embellished with more than 500 yellow beads about 1 millimeter small.

Both pairs of shoes had T-shaped carve-out patterns on the surface, decorated each with gilt-bronze "dalgae," a bracelet-like ornament made with beads. Usually, shoes buried in ancient tombs of Silla were created for funeral ceremonies.

The CHA said the height of the owner of the tomb is estimated at 170 centimeters, as it is 176 cm from the middle of the gilt-bronze cap to the shoes. But the sex of the deceased was difficult to discern at the moment, it added.

"This is a small-sized tomb, but the owner has the full set of accessories. It is expected to be possessed by a noble or royal-blooded person," a researcher from the CHA said. "We've found many new things from this project. We will keep studying the case."

For millennia, Silla tombs have preserved hoards of precious ornaments buried within. Constructed of wood, sealed with clay, and covered with mounds of stone and earth. Among the treasures are accessories of pure gold like caps, belts, earrings, necklaces, bracelets, rings, and decorative swords. There are also ornaments fashioned from silver, gilt bronze, crystal, glass, beads, and jade.