Conny Waters - AncientPages.com - For the first time, an unidentified ship appeared on a beach in York, Maine in 1958. The 50-foot skeleton of a shipwreck has fascinated both local witnesses and researchers. 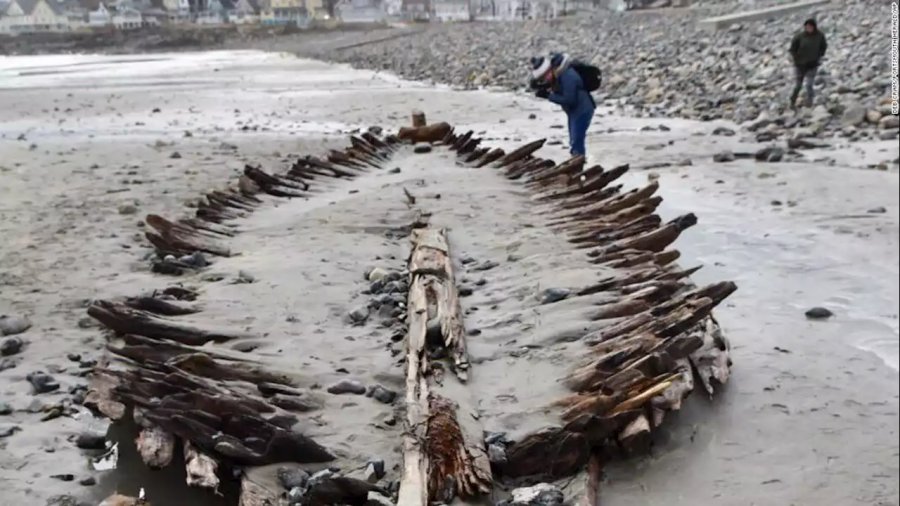 Maine shipwreck uncovered by waves every 20 or so years dated to pre-Revolutionary War times. Image source

But then the wreck vanished again, and it was very difficult to successfully identify the ship and its history.

Now, the decades-long mystery has been somewhat solved after marine archaeologist Stefan Claesson discovered evidence that links the shipwreck to a Colonial-era ship called the Defiance that was built in 1754.

To identify the origin of the shipwreck, Claesson, who is also the owner of Nearview, an aerial drone and archaeological surveying company, sent pieces of the wreck to the Cornell University Tree-Ring Laboratory.

He then looked through nearly 50 years of notary records to discover that a sloop called Defiance had wrecked at the York Beach location in 1769. Research also showed that a sloop of the same name was "coincidentally built-in 1754 in Massachusetts, which fits well with our tree-ring dates of circa 1753," Claesson said.

Records from the 18th century show that Defiance was sailing out of Salem, Massachusetts for Portland, Maine, according to Claesson. The ship was carrying a cargo of flour, pork and English goods along with a four-man crew. But unfortunately, the ship encountered a fierce storm.

"They took anchor, but in heavy seas, the crew was forced to cut the anchor cables, and they were pushed ashore onto York Beach. The ship was a total loss, but the crew survived," Claesson said.

Claesson's discovery is significant because it's one very few examples of a pre-Revolutionary Warship built in New England, he said. But also because it can reveal the increase and impact of storm events and sea-level rise.

"Shipwrecks like this can also be thought of as living organisms, or environmental warehouses, that store and can reveal information about regional climate variations through a study of tree rings. In this initial study, we now have tree-ring data for multiple species from the early 1600s to the 1750s," Claesson said.

Apparently, the Defiance seems to fit every description of the shipwreck, however, additional historical research and archaeological investigations are needed to confirm it as fact.

"The cost of archaeological excavation to document and reconstruct the vessel is very doable," Claesson said.

"This would ensure, even if it is taken one day by the ocean, that we have preserved its memory for future generations. We may not have too many opportunities to document the marine architecture of this vintage and tell the story of these early American seafarers."