A. Sutherland  - AncientPages.com -  Insects have always accompanied humans; some of them have gained a special place in culture and mythology. A butterfly has deep roots in the early beliefs of ancient people around the world, and many myths and legends feature this fantastic insect. 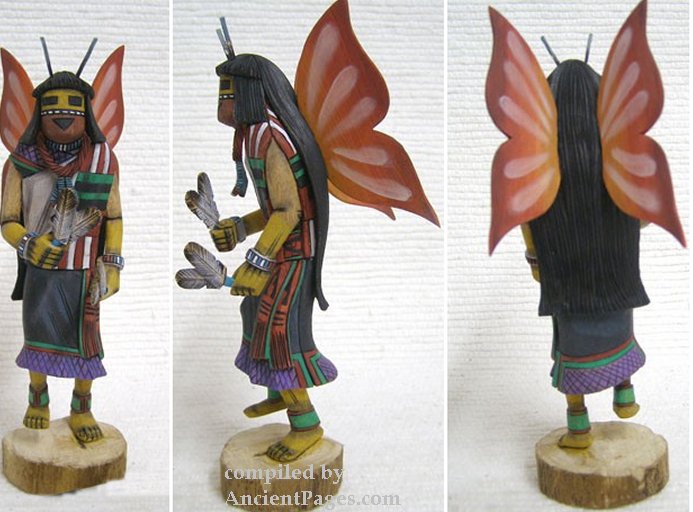 A good example can be the butterflies, one of the most beautiful insects that symbolize the day and female beauty.

The butterfly has been a symbol in almost every culture of transformation and rebirth. The butterfly experience many changes, starting its life in one form and ends in another. Ancient people (and perhaps also modern ones) have long believed that our souls transform. The ancient Romans believed that a butterfly symbolized the soul, and butterflies often adorned old tombstones.

Importance Of Butterfly Among Native Americans

For many Native American tribes, the appearance of a butterfly announces beautiful weather and good luck. However,  butterflies play a variety of other roles in folktales of these people depending on the tribe. Sometimes,  butterflies represent balance and change; other folktales emphasize their beauty, vanity, and playful behavior. Some Native America tribes had taboos against killing these insects. Likewise, among ancient Irish beliefs, there was one saying that in white butterflies dwelled the souls of young children.

The killing of such a butterfly had significant and very negative consequences.

For the Greeks, the butterfly was the symbol of the soul or psyche.  source

Blackfoot people of Saskatchewan, Alberta, and British Columbia, and the U.S. state of Montana, strongly associate butterflies with sleep and dreaming, and butterfly designs were used to decorate cradleboards and other children's objects to help them sleep and experience pleasant dreams.

For the Aztecs, the butterfly was associated with women who had died in childbirth. Such women were honored with the same praise as the Aztec warriors who lost their lives in combat. The monarch butterfly represented the souls of deceased children who return to earth. The Aztecs saw the image of a human face in the insect’s wing motif, and in times of Teotihuacan's greatness, seals and headdresses were adorned with it. 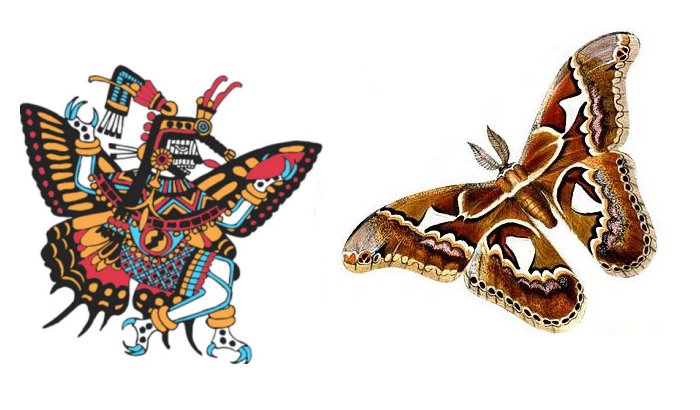 In Aztec mythology, Itzpapalotl ("Obsidian Butterfly") was a skeletal warrior goddess who ruled over the world of Tamoanchan, the paradise of victims of infant mortality and the place identified as where humans were created. source   source2

Butterflies were also associated with fire; their swarming together resembles a dance giving associations with the flames of a bonfire.

Irish folklore attributes butterflies the ability to penetrate between worlds, and the Indians of South America believed that if someone could count the spots on the wings of the most numerous variety of butterflies there, they would find out how much money they would make in their lives.

Among the Hopi in North America, the butterfly is one of the animals of the creator, and so they perform beautiful 'Butterfly Dance' in honor of the butterfly Kachina. The Butterfly Maiden, called Palhik Mana, appears in August when butterflies appear in Arizona. The ceremony is held as a thanksgiving for the corn harvest, and the maidens represent the butterflies that pollinate the corn, helping to bring the crop.

Butterflies Are The Returning Souls Of The Dead

For the Maori, however, the butterfly is a symbol of longevity and immortality while the aborigines of Australia believe that butterflies are the returning souls of the dead.

For the Greeks, the butterfly was the symbol of the soul or psyche. The story of the soul's transformation from human to immortal status is told in the tale of Eros and Psyche.

For the Chinese, the butterfly is the emblem of immortality, joy, and leisure.  Its depictions with the plum mean longevity; when it is illustrated with the chrysanthemum plant (know in China since at least 500 BC) it portrays beauty in old age. The butterfly also means a young man in love; however, if the woman he loves dies, she may be represented coming out of her grave as a butterfly.

In Japan, ancient people had both positive and negative associations with the butterfly, which symbolized a dishonest lover, a vain woman, or a geisha who stays with no husband but is available to man after man. This insect was often viewed as a bad omen, but it also had a positive meaning: two butterflies dancing together was a sign of happy love and happiness in marriage.

Butterfly – Christian Symbol Of Resurrection Of All Men

In Christian iconography, the butterfly is sometimes shown in paintings of Christ Child and the Virgin, particularly in the Child's hand, and symbolizes not only Jesus' resurrection but also the resurrection of all men.

Lake-Thom B. Spirits of the Earth