The 3,000-year-old relief - the Hittite symbol that represented agricultural fertility - is on a rock face near the source of the Ivriz Suyu, whose water largely damaged it, with the passage of time. 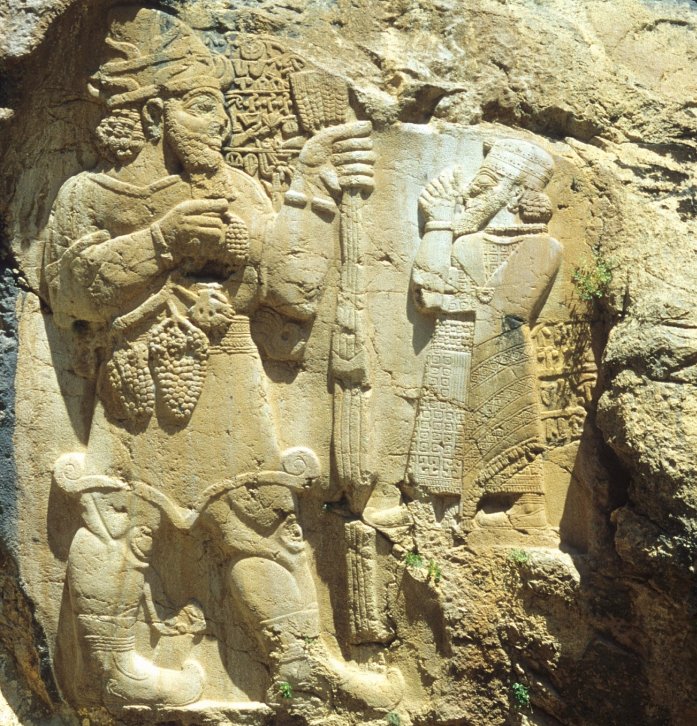 This ancient Hittite piece of art measures 4.2 m high by 2.4 m wide and depicts the late 8th-century BC king Warpalawas of Tuwana (ca 730-710 BC?) Late Hittite (or Neo-Hittite) king ) who stands on a stone platform with his hands raised in a gesture of greeting or worship.

Ripe ears of corn and grape clusters (the symbol of the fertile lands of Konya) in his hands indicate that he brings about fertility. A sickle at his hip on the other hand, symbolizes the time immediately before the harvest. In front of the god's face and behind the king's back are three lines of inscription in Luwian hieroglyphs, naming both figures.

Another inscription at the base of the rock-face was probably two lines long, but it is largely damaged.

Mentioned by several literary sources centuries ago, the relief was built in the late Hittite period.

According to professor Hasan Bahar from Selçuk University, Konya Basin, which is surrounded by Hittite monuments, it was an important location for the Hittites as they heavily relied on wheat, and Konya was in a way their 'wheat silo.

In 1986, two valuable discoveries were made in form of a fragment of a stele of Tarhunzas, with a bilingual inscription in Luwian hieroglyphs and Phoenician saying that it was erected by the king Warpalawas and part of the head of a large statue, which probably also depicted Tarhunzas.

The finds led archaeologists to believe that place was a wealthy sanctuary of the storm-god Tarhunzas  patronized by Warpalawas. Also another relief, approximately the same size, which appears to be a replication of the İvriz relief, was discovered in the mountain at Ambar Deresi, in the ruins of a Byzantine abbey, near Kizlar Sarayi. This relief is less detailed, has no inscription and probably was never finished.