The well-preserved head was found near the Roman forum. The size of the head, with hollow eyes probably once filled with glass or precious stones shows it must have once been part of a large statue. 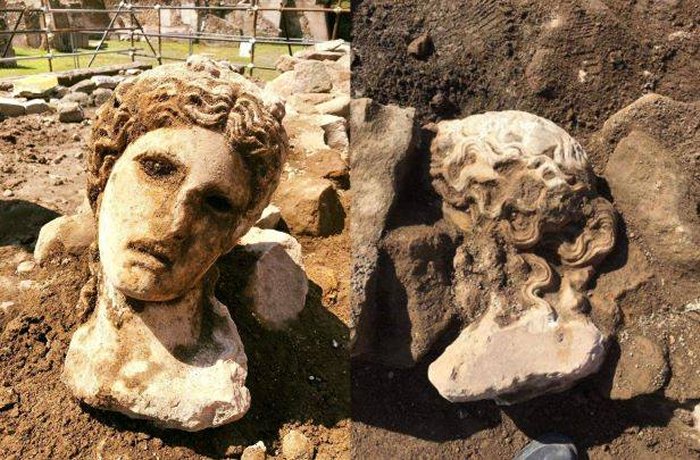 The head of Dionysus was found near the Roman Forum. Credit: Archeological Park of the Colosseum.

According to a statement from the Archaeological Park of the Colosseum, which encompasses the Roman Forum, “the archaeologists were excavating a late medieval wall when they saw, hidden in the earth, a white marble head.”

“It was built into the wall, and had been recycled as a building material, as often happened in the medieval era. Extracted from the ground, it revealed itself in all its beauty.

“The face is refined and gracious, young and feminine. All of which makes us think this could be a depiction of Dionysos.”

The next step is now to clean the marble head and eventually put it on display.

“Rome continues to surprise us every day,” said Virginia Raggi, the mayor of the capital. The head of the statue… is in excellent condition. It’s a marvel.”

Why Is Rome Called ‘The Eternal City’?

What Function Did Towering Columns Have In Ancient Rome?

“The hollow eyes, which were probably filled with glass or precious stones, date it to the first centuries of the Roman Empire,” he said.

“The surface is not completely visible because we haven't yet given it a thorough clean. We think that there could still be traces of the original color conserved in the band around the hair."

Dionysus, was one of the 12 Olympians  and his name means “Twice Born” was the child of Zeus and the mortal princess, Semele who was the daughter of king Cadmus of Thebes.

In a country like Greece where people appreciated theater and wine, it’s easily understandable that God Dionysus was very popular in the country. His cult spread, and he was known as Bacchus among the Romans.

While pulque (“Drink of the Gods”) is Mexico’s oldest alcoholic beverage of the Maya, Aztecs, Huastec and other cultures in ancient Mesoamerica, posca was the ‘wine of the people’ in ancient Rome and Greece around the second century BC.