A. Sutherland - AncientPages.com - There are many unanswered questions regarding the Inca’s marvelous engineering masterpiece known as Tipón.

How did the Inca manage to reach this high level of development? What was the source of their advanced knowledge of hydraulics?

Nowhere else in Tawantinsuyu (“Land of the Four Quarters”) as the Inca used to refer to their empire, are there so well-planned and carefully finished agricultural terraces and irrigating channels as in the Tipón complex. 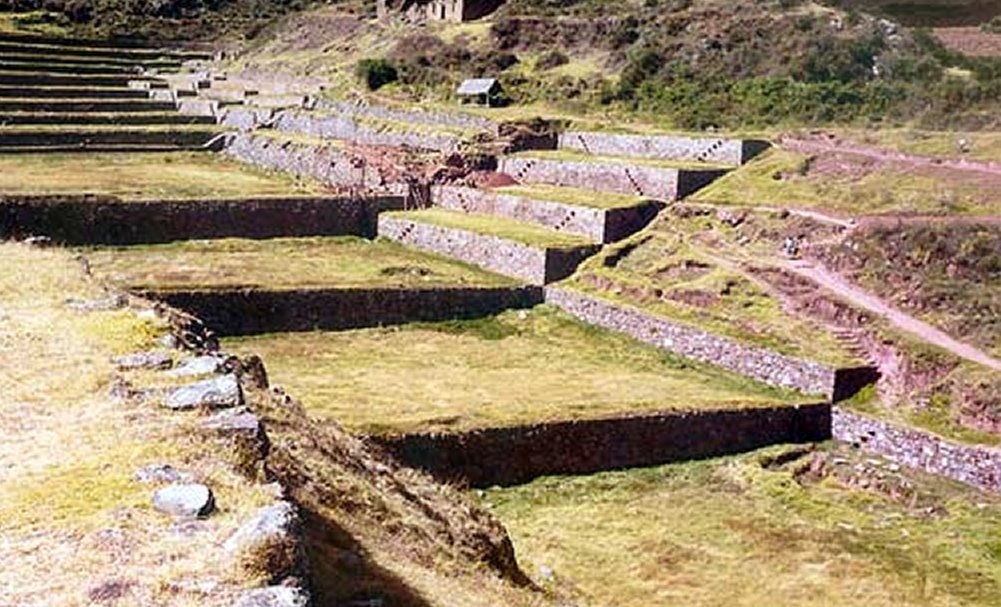 The original name of this Inca site is lost in time; however, Dr. Luis Antonio Pardo, the prominent Peruvian historian, believes that the current name of Tipón may derive from the Quechua word ‘Tuxeuj’ (“to be boiling”). It is believed that Tipón's walled agricultural enclosure was built by earlier people of the Cusco Valley.

As narrated by Inca Garcilaso de la Vega (1539 – 1616), a chronicler and writer, apparently, Tipón was part of the royal estate belonging to Inca Yawar Huaca (Yawar Waqaq), the seventh Sapa Inca of the Kingdom of Cusco (beginning around 1380 AD).

“The balance of Tipon is mostly covered by walled terraces for both irrigated and dry land farming. The exceptions are some upper slopes too steep for terraces and a huge, smooth, volcanic rock slab that is so steep that it will not hold topsoil. 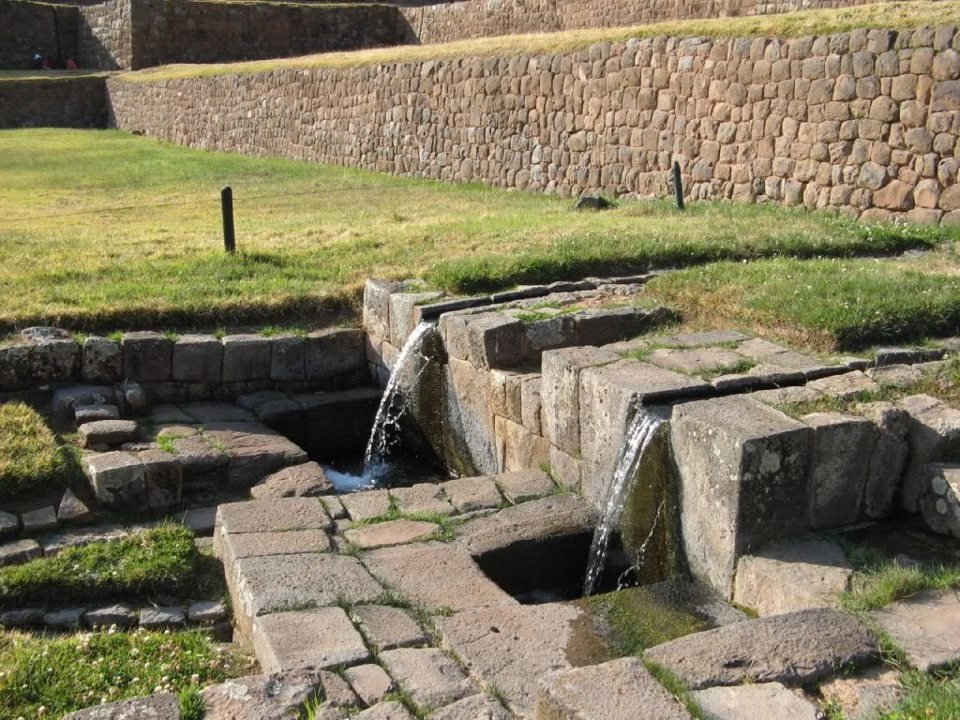 Tipon - home to one of the largest irrigation works in terraces, with many outdoor water channels. image source

The massive outer wall of Tipon, 15 to 20 feet high and nearly 4 miles long, encircles the community. The wall provided security and firmly established the perimeter of this estate.

Tipon was a perfect location for the Inca nobility to construct an estate. Its perennial spring, adjacent streams on the east and west, and fertile volcanic soils were coupled  with an already walled agricultural enclosure built by earlier people of the Cusco Valley…”

At the same time, Tipon was devoted to religious ceremonies and agricultural experiments. The site that dates back to the beginning of the 15th century, is located at 3,560 meters above sea level, about 23 km southeast of Cusco, in the district of Oropesa (province of Quispicanchis), along the Cusco-Puno road.

It covers 239 hectares and consists of enclosures and wide agricultural terraces irrigated by a network of water channels fed by a natural spring.

Tipón - A Laboratory Of Agricultural Products

Besides being an archaeological complex, Tipón is home to one of the largest irrigation works in the terraces, with a great distribution of outdoor water channels. 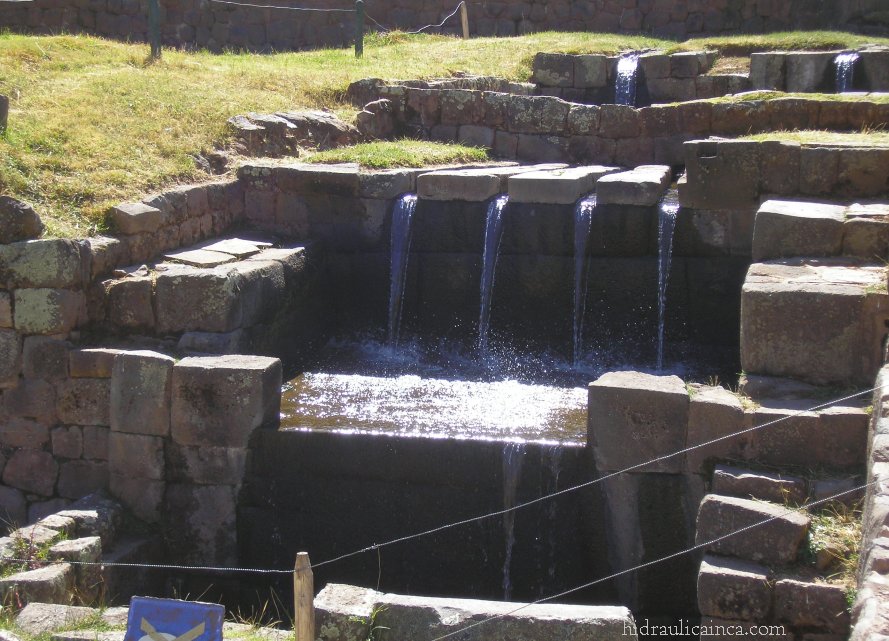 This beautiful compound of agricultural terraces, long stairs and stone canals is located 20 km south of the city of Cuzco.

One can think of Tipón as the largest artificially irrigated Inca garden or rather an unusual complex of garden-like structures rising on many levels and on dozens of stone terraces.

This was a garden laboratory, probably used for experimenting with agricultural products, utilizing the various micro-climates found within the complex.

It can be assumed that Tipón was a similar place for Inca agronomists, as Moray (Moroy), famous for its oval farm terraces. Moray, located in the Sacred Valley of the Incas, has an old but very sophisticated irrigation system.  Probably like in Moray, also in Tipón, the Incas experimented with the cultivation of new plant varieties of potatoes, corn, and other plants.

Manco Capac: Legendary Founder Of The Inca Dynasty Of Peru

To these activities, they needed water that flowed through fine stone structures (aqueducts, spillways, canals and falls) and farm terraces situated at many different levels. Having proper conditions, the Inca plants could grow at different temperatures and with different sun exposure. 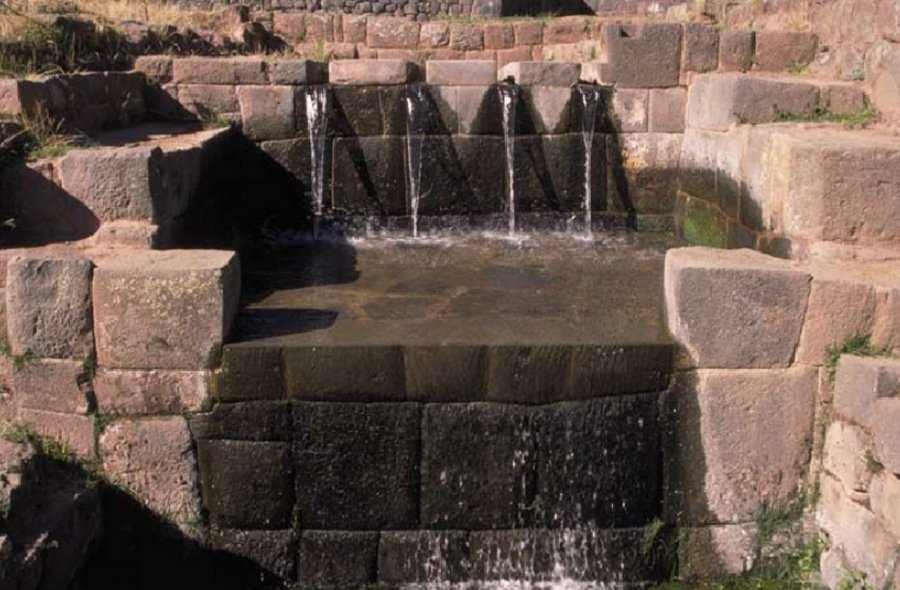 The hydraulic engineering of the  Tipon fountain represents a high standard of care to create an aesthetic amenity. Credits: Wright Water Engineer

Therefore, the terraces rise from the bottom of the valley to its upper edge, while water flows here through aqueducts and canals, freely adjusted.

Rings Of Moray – Sophisticated Irrigation System In Sacred Valley Of The Incas, Peru

Centuries ago, the Tipón ingenious complex was most likely destroyed by the Incas themselves, who did not want to leave it in the hands of the Spaniards.

After many years, the complex was reconstructed and restored to its former glory. Tipón was once an important, specially protected place and it is evidenced by a large, oval fort that rises on the northern flank of the complex.