A. Sutherland - AncientPages.com - Although gigantic chalk figures or geoglyphs are something of a modern phenomenon, there are examples that this tradition has been going on for more than 3,000 years.

There are 56 hill figures scattered around England including giants, horses, and crosses and a few of them are very old. The reasons for the creation of these figures are varied and rather obscure, but both hill figures and white horses are among the most attention-grabbing features of the chalk landscape in southern England. 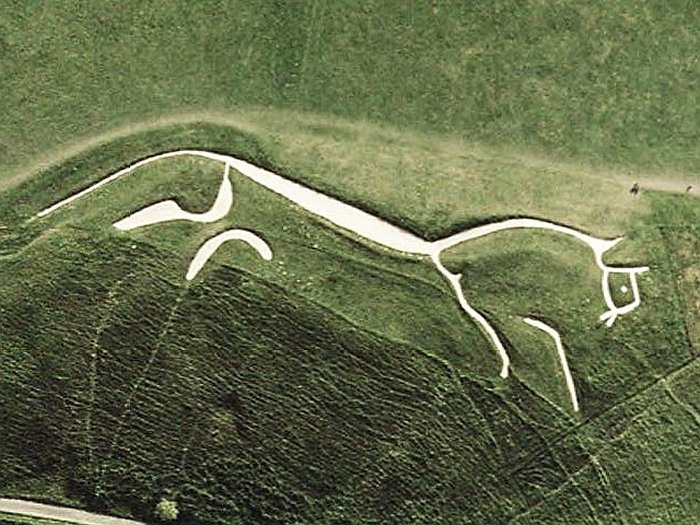 Some of these figures can trace their roots back to the arrival of the Celts in Britain, a period of time shrouded in mystery, myths, and legends.

The Celts first came to Britain in 500 BC bringing with them their style of pagan worship. The Celts thought of their gods as giants and portrayed them as such. The horse-goddess Epona was worshipped by the Celts in Gaul, and she had a counterpart in Britain, Rhiannon, a native British horse-goddess, described in later Welsh mythology as a beautiful woman dressed in gold and riding a white horse.

These huge figures of men and horses can still be seen on many grassy hills in Britain.

Perhaps the oldest chalk figure in the United Kingdom, if not the world, is the famous Uffington White Horse, located in Oxfordshire, England. The original purpose of this horse is unknown.

Recently, this most mysterious figure of all was re-dated and shown to be even older than its previously assigned ancient pre-Roman, Iron Age date. The Uffington White Horse - surrounded by Neolithic and Bronze Age burial mounds - has been placed in such a way that it can only really be viewed well from afar or from above. 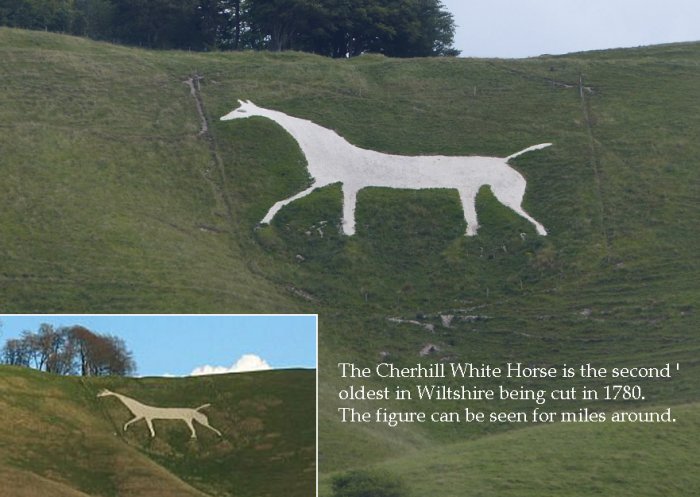 The Cherhill White Horse in Wiltshire

The earliest documented reference regarding this curious figure is from the 1070s, however, the carving is believed to date further back in time.

Was the Uffington white horse carved by supporters of a cult of the horse-goddess or created for ritual or religious purposes? Unfortunately, no one can shed some light on its origin.

Not all of these gigantic chalk figures are very old. Many chalk carvings of horses were created in the 18th and 19th centuries.

The Cherhill White Horse in Wiltshire, which is the second oldest of the Wiltshire horses, is situated on the edge of Cherhill Down, off the A4 Calne to Marlborough road just east of the village of Cherhill, and is just below the earthwork known as Oldbury Castle.

It was carved in 1780 by Dr. Christopher Allsop of Calne, sometimes referred to as "the mad doctor", who to have directed the marking out of the horse from a distance, calling instructions through a megaphone. The original size of the Cherhill White Horse was 165 feet (50 m) by 220 feet (67 m).

This white horse once had an unusual feature, namely, a glass eye, which was formed from upturned bottles pressed into the ground to reflect the sunlight. The eye had a bright gleaming appearance and was clearly visible from a larger distance.

Today, the eye of the horse is made of stone and concrete and the whole figure was restored in 2002, and now the carving depicts this horse with much more defined edges. 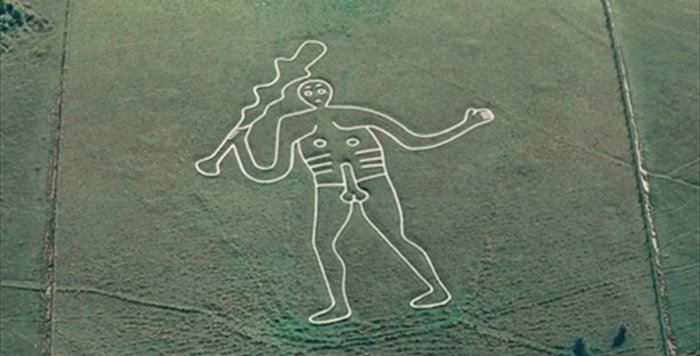 Cerne Abbas Giant - the 180ft tall club-wielding man has long been considered as a sign of fertility due to his large, erect phallus. It is not agreed how old the Cerne Abbas Giant is, but the most likely explanation is that he depicts Hercules, the god with superhuman strength. Hence he was probably created as a pagan idol during the Iron Age period of Britain. There is some evidence that the Giant may once have carried a cloak over the left arm and a severed head in his hand.

Almost as well known as the Uffington White Horse, is the 180 feet high Cerne Abbas Giant. It is figure cut into the hillside to the north-east of the village of Cerne Abbas, and to the north of Dorchester, Dorset.

This giant, a round-headed naked man with a huge knobbed club in his right hand, was identified as Hercules and associated with a fertility cult, or Priapus Worship, revived by Emperor Commodus in the late 2nd century AD. Above the giant's head lies a rectangular earthwork enclosure known as the Trendle or frying pan - thought possibly to be an Iron Age temple site connected with the gigantic chalk figure below it.

Unlike the Uffington White Horse, the earliest surviving documents regarding the Cerne Giant dates only as far back as 1694, but some residents of the village, who remember local stories tell of a giant that was killed on the hill. They claim that the figure had been there "beyond the antiquity of man". This chalk figure was placed there marking the giant's death. 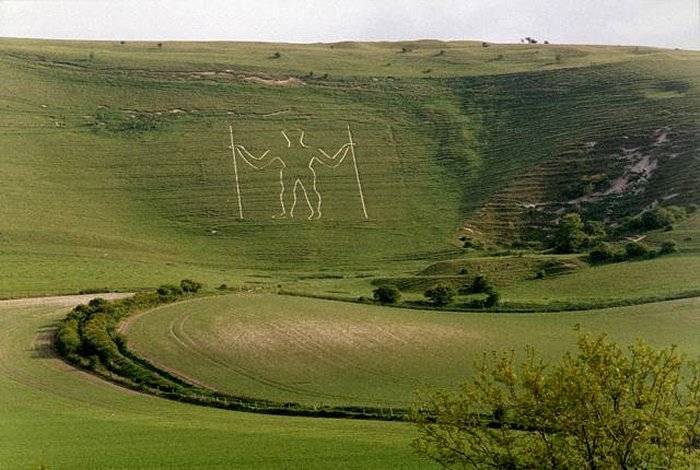 Carved into the steep slopes of Windover Hill, Sussex, there is another chalk giant - the Long Man of Wilmington. This 227 foot (69 meters) chalk carving looks out over the countryside, supporting himself with two long staffs, one in each hand.

This is the tallest hill figure in England and the figure is merely an outline and bears no details that may identify him, although it has been suggested that at one time, the Long Man may have had features similar to the Cerne Abbas Giant (i.e. a large phallus), this was erased during restorations.
There is no evidence for him ever having such a feature, however.

The origin of the Long Man is enigmatic and his first mention comes from a drawing of 1710. Until recently, the Long Man of Wilmington was believed to be of prehistoric origin. Now, it is said that the earlier theories are wrong and that the figure had been carved as recently as 1545 AD (!).

What was the purpose of these giant figures and who carved them? How has the oldest of these figures managed to survive for millennia?

By the way, there is another giant figure of a mysterious man. This time, however, it is not located in England but in South Australia's Far North, 60km west of Marree.
Discovered in 1998, the figure still baffles locals. The only way to see it properly is from the sky.

"From the southeast, the Marree Man is quite visible but you've got to be at the right height to see it, at between 3000 and 4000 feet (about 1100m)," William Creek-based flight tour operator Trevor Wright, from Wright's Air, said.

Who created the Marree Man may forever remain a mystery.