David Tee - AncientPages.com - The earliest records anyone has of the Japanese myth Susanoo-no-Mikoto appears in the 8th century AD. These records tell the story of the Japanese storm and sea god who could not control himself when he got excited. 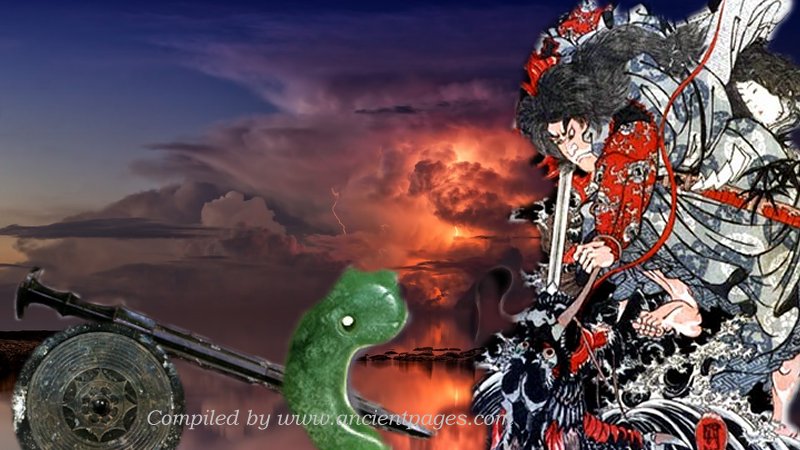 How his sister was born we do not know. But Susanoo’s banishment came when he could not control his temper. Like some gods, Susanoo had a favorite weapon, the  Kusanagi sword that was one of three Imperial Regalia of Japan.

Susanoo and his sister Amaterasu decided to have a little competition between each other.  They decided to see who could create gods and then they would decide who won the competition. Susanoo decided that he won because his object created women. His sister agreed and for a time the two lived very contentedly.

Mystery Of The Kusanagi Treasure: The Legendary Sword

But this quiet scenario was not going to last. For some reason, Susanoo lost his temper and went on a rampage destroying his sister’s property and killing one of her maids. This made Amaterasu very afraid, and she hid in a cave.

Amaterasu was the sun goddess and when she hid herself, the world was plunged into darkness. It was a situation that could only be remedied by drawing her out of her hiding place. For his actions, Sosanoo was banished from heaven.

Different accounts have this event at different times.

Susanoo-no-Mikoto And The Three Regalia

The three imperial regalia of Japan are revered items that are housed in different shrines throughout the country. They have been used to guide the nation into modern times and turning feudal Japan into a modern country.

They got together and decided to give her jewels and a mirror. Then the goddess Uzume started to take her clothes off. The idea of this dance made the other gods laugh loudly. This piqued Amaterasu curiosity, who wondered why they could be celebrating. 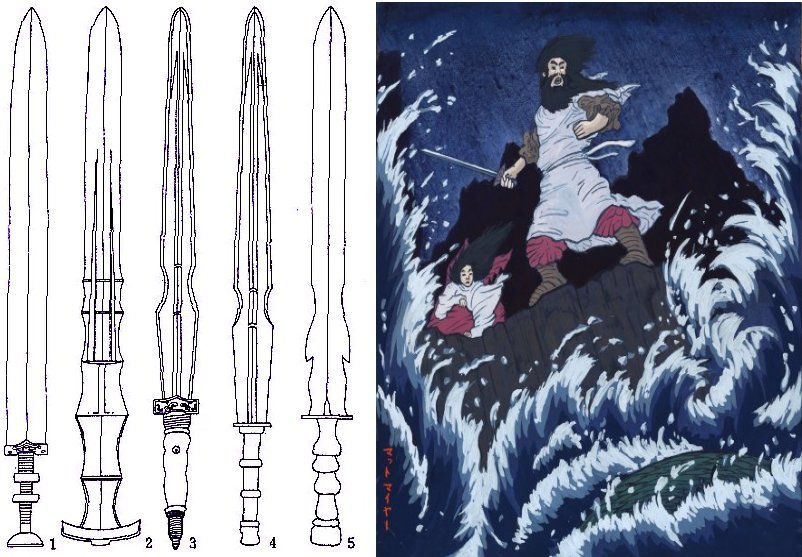 Left: The sword ‘kusanagi ‘ has never actually been seen, however, it could have actually looked like one of these. Right: Susanoo (Susano-O), the god of the seas, storms, and also the ruler of the Yomi, the underworld.

Once she opened the blocked cave, the other gods dragged her out of hiding. A third gift, the sword the kusanagi no tsurugi, was given by Sosanoo as an apology. He was sorry by what he did and tried to make it up to his sister by giving this sword he had taken from an earthly monster.

These three items make up the three imperial regalia.

Once on earth, Susanoo was not lacking adventure or challenges. One challenge came when he met some Japanese villagers who told them a monster had devoured some of the children from the village.

The monster was an eight headed serpent who covered 8 hills and 8 valleys with his large body. Susanoo did not meet the serpent head on but decided to use a little trickery. He had the villagers prepare 8 large vats of sake and when ready, Susanoo placed those vats in the path of the serpent.

Each head of the serpent drank from their own vat. Once consumed all eight heads fell asleep. Susanoo then took his sword and cut the eight heads off. He then proceeded to the tails and saw that inside one of the tails was the sword kusanagi no tsurugi.

This was the sword that Susanoo gave to his sister in apology and which became one of the three imperial regalia of Japan.

Susanoo-no-Mikoto Is Still Thought Of Today

Both Susanoo and his sister, Amaterasu are housed in temples today, they are not placed together. Amaterasu was placed in the Honden Shrine or "Grand Shrine, while Susanoo was housed in the Kumano Taisha located in Shimane.

That was the place it is said that he descended to earth.