Rafael - AncientPages.com - In a lot of societies in history, those who engaged in bloody battles were the males. In fact, they were the ones sent or chosen by lords to protect and defend their turf. However, there were also women who managed to create a name for themselves in these male-dominated skirmishes. 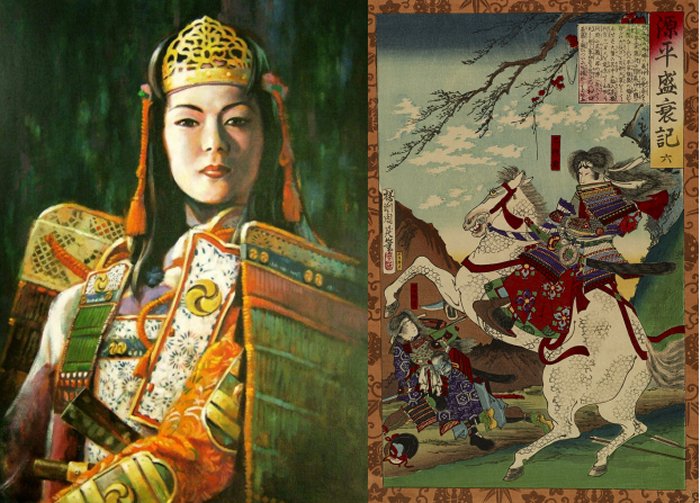 These women were acclaimed not only for their superior skills on the battlefield, but also for their cunning strategists. They were distinguished for being great, inspirational leaders.

Like other cultures, feudal Japan’s warfare was primarily a man’s business. Yet despite this, there were still a few women warriors during that time, and one of the most famous would be Tomoe Gozen.

It is worth noting that during the period of feudal Japan, it was not uncommon for women to train in the martial arts. Between the twelfth and nineteenth centuries, females from the samurai class - commonly called the Onna Bugeisha - were required to undergo training to use the naginata, the sword, as well as the bow & arrow.

The roles of these female warriors were mostly defensive. They were expected to protect and safeguard themselves, as well as their homes during an enemy attack. What set Tomoe apart from other female warriors was that she was among the very few women who were deployed on the offensive side.

The Japanese women in Japanese history had numerous levels of standing and independence in society. Yet in general, they were only provided with inferior roles and tasks compared to their counterparts. Of course, females who became Onna Bugeisha were not exempted from this. That said, they still sometimes delighted in a great deal of legal rights and independence unlike other cultures of the time.

One should not commit the mistake of thinking that Japanese women lived in a society that was democratic and equal. Onna Bugeisha may have found fame and influence with some, yet it is possible that a lot had contempt and issues for those who allowed women in their units; as well as males who were offended by the idea of fighting together or fronting a female.

Ancient History Of The Samurai Armor

Generally, Japan’s feudal society was quite liberal when it comes to how females were perceived. This goes for the different rights that they were authorized with. Furthermore, they could also manage businesses, inherit states, as well as voice out their opinions regarding social affairs. They were able to do this without needing a man’s permission.

During the Heian and the Kamakura era, it was said that these were the most favorable and best times for Onna Bugeisha to get ahead in their respective units or armies.

Though prominent for her skills and for being on the offensive, Tomoe was only noticed in one epic account. It was from The Tale of Heike which came from the late 12th century during the Genpei War. Aside from this, there were no other written accounts of Tomoe’s life and the other possible battles she engaged in.

This led some to believe that the female warrior was simply a fictional character that was brought to life by the author of this epic. Nevertheless, Tomoe Gozen was introduced in the tale as a fair yet strong woman. The description about her was described closely to this:

Tomoe had a fair complexion, a lovely face, and flowing black hair. Despite the appearance, she was a brave and confident rider whom no one could dismay. She was dexterous enough to wield a bow & sword and would match even a thousand warriors. Perhaps, she was even fit to meet either God or the devil.

Numerous times, Tomoe has taken the field in full gear of armor, winning in numerous encounters against the bravest of captains. And on the last fight - specifically the Battle of Awazu in the year 1184 - all others have been slain or have fled, yet among the last few remaining stood Tomoe.

Based on the same source, it was claimed that Tomoe also founded her own school. She aimed to educate other females in fighting to be able to bring out their confidence in offense and defense. Tomoe was known to be a cultural wonder, influential inspiration, and a great symbol of strength for the Onna Bugeisha.

According to some reports, Lady Tomoe was a servant, a lover, and the wife of the General Minamoto Kiso Yoshinaka. He was a man who rebelled and disobeyed the Taira clan.

In the year 1184, the two took Kyoto after having won the Battle of Kurikawa. And with the Taira clan forced into exile, Yoshinaka announced that he had interests in becoming the leader of the Minamoto clan. This suggestion had caused Minamoto Yoritomo to attack.

During the attacks, Tomoe and Yoshinaka bravely faced Yoritomo's warriors in Awazu. During the Battle, it is said that Tomoe took at least one enemy head fearlessly.

The twelfth century Onna Bugeisha from Japan's feudal period, Tomoe Gozen emerged as a true legendary warrior for her heroic and fearless feats during the Genpei War. She was not only the lover of the warlord Minamoto no Yoshinaka, but Tomoe Gozen also became his right-hand woman during battles; thus, earning a fierce reputation.

The Genpei War: The Battle of Awazu

As an Onna Bugeisha, Tomoe Gozen has truly proven herself when it comes to skills and on the battlefield on numerous accounts. She led a group of just three hundred samurai warriors but was able to fight over two thousand enemy troops. Tomoe was among the last five survivors of the battle. In the year 1184, during the Battle of Awazu, Tomoe was able to defeat and decapitate a famous warrior, Honda no Moroshige.

On the 21st of February in the year 1184, both Tomoe and Yoshinaka engaged in a decisive battle against Minamoto no Yoritomo, Yoshinaka’s cousin. His forces were greatly outnumbered and knowing that they had already lost in battle, Yoshinaka urged Tomoe to flee to save her life. According to the Tale of the Heike, the story differs whether she did obey her husband. Some say she only fled after capturing an enemy head.

Based on other sources, the description of Tomoe Gozen’s actions in this specific battle vary greatly. There were some who claim that it was Yoshinaka’s head she fled with to prevent it from falling in the hands of their enemy.

There were others stating that Tomoe refused to leave the side of her husband and fought alongside Yoshinaka until their deaths. Those who claimed that she escaped also have varying endings to the story: some say that she eventually committed suicide, while others note that she became a nun after her husband’s death.

Weapons And Martial Arts Of the Female Samurai

Onna Bugeisha were generally female samurai warriors. They were trained to use a variety of weapons for the purpose of defense. The most common weapon used was the naginata - one of the most iconic weapons during that period. There were two types of naginata: the o-naginata used by the males, and the ko-naginata for women.

The ones utilized by females were much smaller than the male’s. This allowed the Onna Bugeisha to have better balance given their smaller built and lesser body strength. Another weapon that these female warriors used that was a kind of a Tanto these were called kaiken.

These were double-edged blades that reached up to ten inches in total. Commonly, these blades were designed mainly for self-defense in confined areas since the wielder would have very limited movements.

The kaiken was also utilized to complete the act of the ritualistic suicide called seppuku. This was considered as an interesting tradition that involved the use of the dagger. Seppuku was prevalent during the period since it avoided any form of dishonor. Generally, every Onna Bugeisha was required to carry a kaiken at all times. This was vital when she moved in with her husband.

Onna Bugeisha’s were equipped with the knowledge of tantojutsu. This is a style of fighting wherein they trained from a very early age. Today, the art of tantojutsu is still common and is being practiced by numerous individuals.