A. Sutherland - AncientPages.com - Asuka, which means in Ainu, "flying birds" is one of the most historically rich places in Japan.

This remarkable small village, located approximately 20 kilometers south of Nara City, in the Kansai region of Honshu, central Japan, is covered with unusually shaped megaliths, of which many are of titanic dimensions and weights.

So far, no one has been able to shed light on the past of Asuka's stone relics and monuments and their hidden history. They are shrouded in mystery relative to their date of construction and original function.

The most famous of the monuments is ship-like boulder "Masuda no iwafune", located near the top of a hill in the village, in a place Ishi-no-Ho-den". 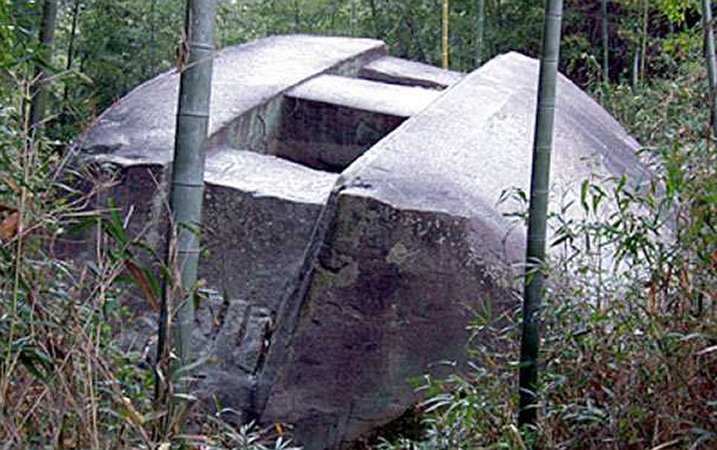 The "boast stone" is one of most strikingly enigmatic of the Asuka megaliths. One puzzling characteristic is that in places it is rough and unfinished, seemingly entirely like a work of nature, and in other places beautifully cut into right-angled planes.."
"Masuda no Iwafune" does not resemble the style or construction of any other Buddhist monument and represents one of the greatest mysteries of Japan.

Masuda was the name of a lake thought to have been near this stone; hence the translation would literally be "Masuda ship rock".
For the first time, this gigantic boulder was mentioned in Japanese literature of the 8th century.

However, it still represents one of the greatest archaeological puzzles of Japan, because no archaeologist is able to state with certainty how old the Masuda-no-wafune really is or what its original function might have been.

In one of our earlier articles, we wrote about some strange sightings recorded in the sacred texts of The Nihongi. For example in 634 A.D. "a long star seen in the south... which the people called a besom-star", and in 637 A.D. a large "star" was floating from East to West causing a thunder-like noise.
On the 7th day of the second month of Spring, 640 A.D. people saw a "star" that entered the Moon. and another "guest star" entered the Moon on the 9th July 642 A.D.

Something Ancient And Unknown Is Hidden Inside A Huge Underground Structure In Japan: Mystery Of Mt. Tsurugi Deepens

First Peoples Of Japan: Ainu Civilization And Its Unknown Origin

Was the Masuda-no-iwafune astronomically oriented? Was it a structure constructed for observations of the sky? A number of questions still remain relative to whether or not the stone was actually used for astronomical observation.
In its upper part, the "Masuda ship rock" has two holes, which were long concealed by pine trees.

The monument is 11 meters long, 8 meters wide and 4.7 meters high and weighs approximately 1000 tons. The upper surface is flat, with a shallow trough and two square holes.

At present, the stone bears lattice-shaped indentations around its base which testify to the process used in flattening the outer surfaces. 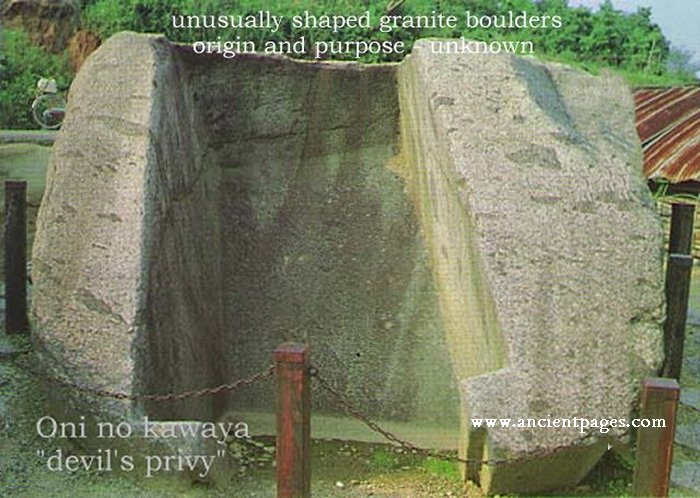 Based on 12th century records, it was believed to be "stone of demonic form".

There have been countless attempts to explain its origin and purpose, but all these attempts have failed. Researchers have already investigated the rock with ultrasound devices and measured the object with laser scanners only to find nothing.

Other carved stones of Asuka

"The actual purpose" of the great megalith remains a mystery, according to the Asuka Historical Museum