A. Sutherland - AncientPages.com - Askeladden (in English: ‘Ash Lad’) is a wonderful, the youngest of all brothers, and least resourceful figure that originates from ancient mythological beliefs.  When we hear that someone is ‘least resourceful’ we immediately think of an unbelievably stupid person. 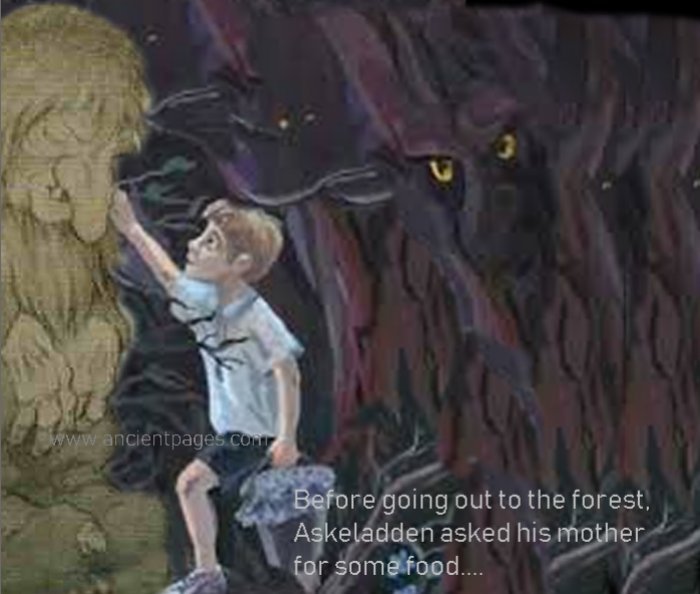 But it is not the case with Askeladden because finally, this little boy can handle most difficult situations and he surprisingly wins when everyone else fails.

Askeladden is mentioned in many folk tales that describe his fascinating adventures. There is especially one story that perfectly presents the boy's character.

One day, a poor farmer with three sons, sent them to cut wood in a forest he owned, to pay off debts. Askeladden was the youngest most probably the dumbest in the family.

The eldest son went first, but returned with nothing; for he came across an evil troll who threatened him with death if he cut down any tree. The next day, the same fate met the average brother.

Then it was Askeladden’s turn to go and try, but before going out to the forest, he asked his mother for some food. In the forest he began to cut wood and then, the troll suddenly appeared.

Askeladden pulled out some cheese and squeezed it so that water flowed and convinced the troll that it was a stone. He also threatened that if he disturbed him at his work, he would do the same with him as with the alleged ‘stone’.

The troll – not very intelligent creature - did not disturb Askeladden and even offered to help him with the wood-cutting. When the job was done, the troll invited the boy to his house for supper and asked him to bring water in one of the boilers, which was so huge that Askeladden could not even move it.

But remember, Askeladden was very resourceful so he came up with a brilliant idea and said:

"It is not worth bringing along these thimbles; I think I’ll rather go for the entire well."

"No, dear," said the troll, "I cannot lose my well. Make the fire, and then I will get the water."

The troll brought the water himself, prepared a meal, and then proposed an eating competition. The boy obviously knew he had no chance to win this eating match.

The boy managed to sneak to him his bag, and tied it to his belly. Then he put much more porridge into his bag than he ate himself. When the bag was full, he took up his knife and cut a hole in it.

They had eaten for quite a while, but finally, the troll put down his spoon. "I give up, I can eat no more," he said.

"But you must!" said the boy; "I'm barely half full yet. Do as I did, and cut a hole in your stomach; then you can eat as much as you want."

The troll did so, and died, and the boy took all the silver and gold he could found in the mountain and brought it home to his father. Now they were very well able to pay off some of the debt.

So Askeladden is a clever and cunning boy; he is also very resourceful. He stays calm in a difficult situation, but he is also ruthless and unscrupulous in pursuing his own goal.

He uses a few tricks to deceive the troll and he does not think about the consequences and what kind of damage he will cause.

His damage cannot be repaired because he kills the creature.