AncientPages.com - Excavating the ancient city of Sogmatar, Turkey, archaeologists unearthed a 5,000-year-old toy chariot buried along with a child.

Ancient City of Sogmatar (from the word "Matar" in Arabic that means rain) and keeps many secrets. It is among the world’s oldest settlements.

It is believed that in the region, Prophet Moses escaped from pharaoh, and engaged in farming here and that one of the well holes was opened by the miraculous sceptre of Prophet Moses.  The city was Moses’ place of living.

The hill town at the centre of the village, points out that Sogmatar could have been established before Common Era. The remnants of walls and towers at the hill reveal that the hill town was used as a castle in 2nd century AD. 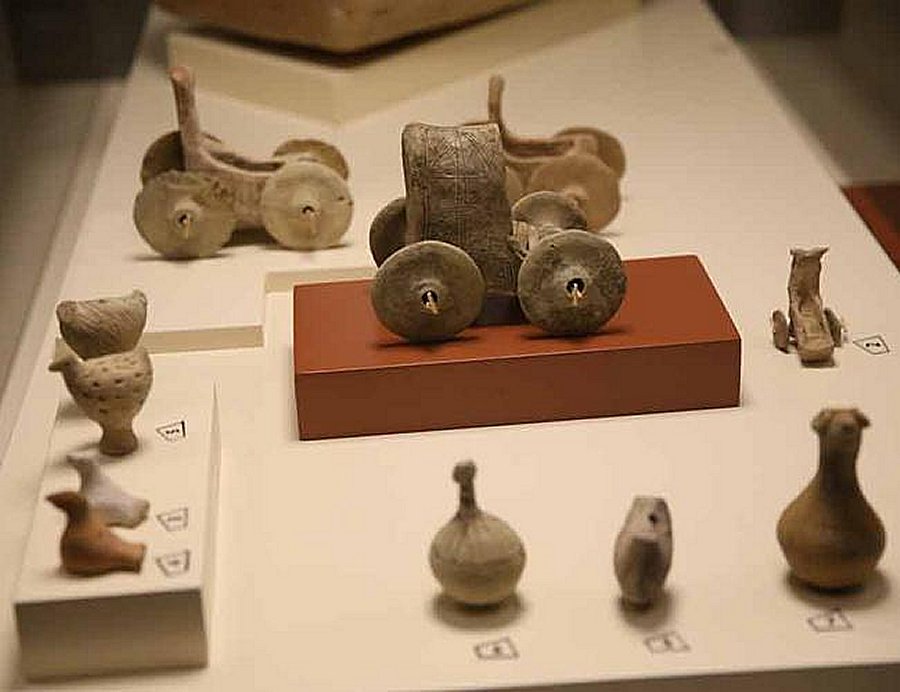 The toy chariot (above) and a rattle are among the artifacts discovered in child's grave. Image: AA

Sogmatar was a Pagan religion centre in 2nd century A.D. This outdoor sanctuary, that is the Sacred Hill, represents Mare-lahe (Lord of the Gods), the chief god of this religion, and constitutes the centre of settlement order of Soğmatar.

It was firstly thought that 7 circular structures which are located around the Sacred Hill and on hills represent Sun, Moon, Saturn, Jupiter, Mars, Venus and Mercury but it was understood that there was a grave monument and sacred area here according to the researchers. It is thought that Pagans in Soğmatar who climbed up the Sacred Hill, prayed by facing towards these temples.

Furthermore, it is also thought that Harran Sabiis used to face towards the Sacred Hill, in which the sanctuary of chief god exists, during their pray in Moon God Sin Sanctuary. 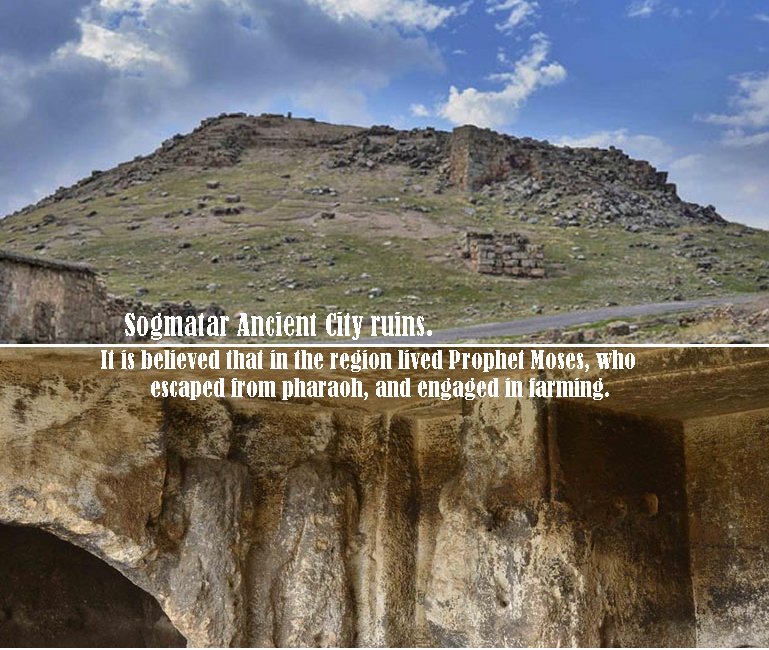 There are embossments depicting the gods belonging to 150-200 A.D. and important people on the walls of the cave that is called Pognon Cave, located 250 metres northwest of Sogmatar Castle.

A number of rock tombs (with many artifacts) were unearthed in the region, with one of them revealing the toy horse carriage and a rattle.

“We have so far obtained important findings in the excavation field. In a tomb in the necropolis area we found an earthenware toy horse carriage and its wheels,” said Şanlıurfa Museum Director Celal Uludağ, the head of the Soğmatar excavations. 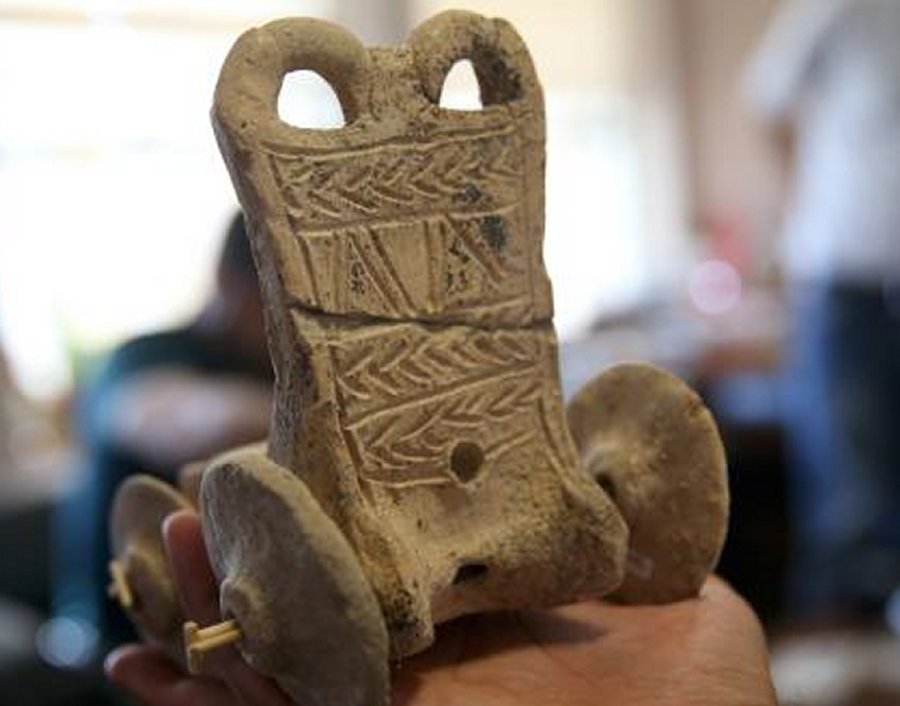 A toy car in the graveyard in the necropolis area, which was dated to the Bronze Age, was made of baked clay. Image credit: AA

The toy dates back to the Bronze Age and is thought to have been produced for the children of kings or administrators in the city. It shows us the sense of art and children’s sense of play 5,000 years ago. This finding is very important to us and will be displayed at Turkey’s largest museum complex, the Şanlıurfa Archaeology Museum. We think we will get more important findings as long as the excavations continue.”

According to documents, Sogmatar was once a center of Paganism and a large hill in the middle of the neighborhood was the center of the settlement.

According to earlier excavations conducted in the area, the place, which contained both a temple but also a necropolis, was dedicated at the time to the god of the moon, Sin. 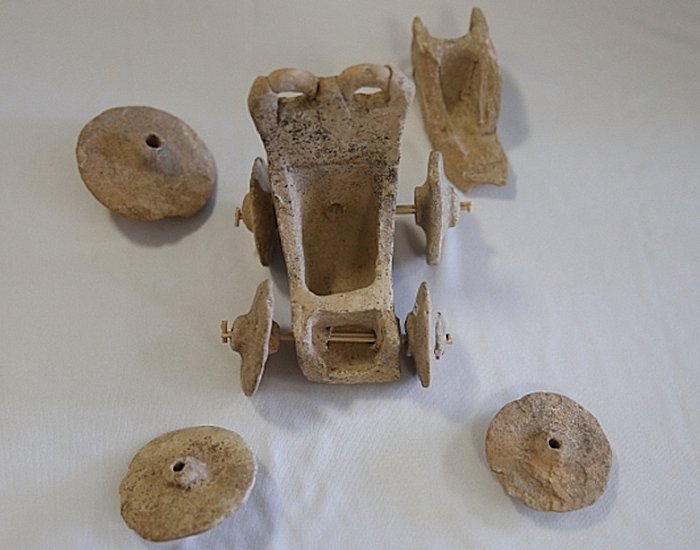 “We found some 120 tombs in 2012. Seven in particular were really remarkable and almost all of the 120 tombs had a view of the mound,” said Associate Professor Yusuf Albayrak who works at the site.

“We carried out searches in the mound and ceramic findings showed that this place was a settlement until recently.”

The tombs date back to the early Bronze Age, 5,000 years ago. So far, researchers opened 45 tombs, finding three tombs that were not even opened in the Roman era. In one of these tombs, we found a four-wheeled miniature horse carriage, a children’s toy, as well as a rattle with a bird motif. Children’s toys were buried in children’s tombs, according to researchers.