A. Sutherland - AncientPages.com - It was far less likely that someone would give obscene messages directly to a postman.

Until the 1800s, people who wanted to send their letters, had to look after a man walking through the town's streets to gather all packages and letters to deliver them to the post office. 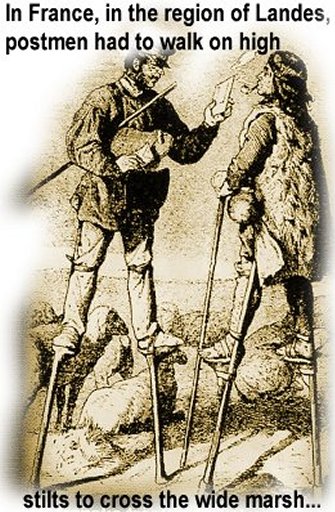 The people had long depended on special messengers or entrusted their mail to travelers for delivery.
The first truly public postal system is credited to France and was initiated by King Louis XI in 1464.

In 1591, England could organize a public postal system during the reign of Queen Elizabeth.

However, there was something very chaotic over all existing international postal services with different conflicting and confusing postal rules, tariffs, etc.

What the worldwide postal system really needed was to make its global modification much more efficient. In other words, an international organization was needed to be simpler! Different postal agreements between countries became a solution.

Montgomery Blair (1813 – 1883) was a man, who found a way out of this maze introducing several innovations into the international postal service.

But what was the situation in the USA in the 1800s?

In the middle of the 1800s, large parts of USA still constituted desolate wilderness. Clearly, there was an invisible barrier between East and West of the great country.

The United States decided to open the western frontier to "rapid communication" with the Pony Express, a privately-funded mail service. Pony Express operated only 18 months, from April 3, 1860 to October 24, 1861 but was of great importance for the Americans. 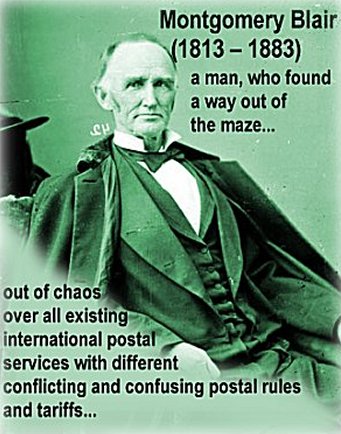 The service covered 1,966 miles from St. Joseph, Mo. to Sacramento, California and it could take several months to send mail to California by boat via South America.

The horse relay finished the journey in just 10 days. Pony Express Company, which was a commercial and not a state-sponsored or military enterprise, had post stations and used horses to ferry mail, the practice that dates back to antiquity.
However, from the beginning, the company had rather precarious existence.

Did the founders believe in the long-lasted existence of Pony Express?  In fact, they did not.

The problems were not only due to the rigors of the trail.
To organize fully functioning company, it would require 190 Pony Express stations situated from 10 to 15 miles apart, in five divisions along its 1966 mile route, more than 400 station workers, about 500 horses and more than 200 riders.

The cost of such enormous commitment was large, in other words... too large. Even, the high rate of $15 per ounce for Pony Express delivery did not cover the costs.

Struggle To Get Mail On Time Has Lasted More Than 5,000 Years – Part 1

Struggle To Get Mail On Time Has Lasted More Than 5,000 Years – Part 2

Although the Pony Express delivered the mail across the country within the 10 day time limit, financially it was a disaster.

Another problem was caused by Indian raids. The Paiute Indians who lived in the areas systematically attacked the Pony Express stations. During the Paiute War in the spring of 1860, seven stations were burned, 150 horses were lost and 16 men were killed at a cost of $75,000.

Very tough and skillful, young riders worked for the company. The horses of the Pony Express were grain fed and had great endurance. The pay for a Pony Express rider was between $100 and $150 per month. Although they were only supposed to ride 75 miles, they often rode much more in a single trip, due to a lack of available riders.

Do you remember William “Buffalo Bill” Cody? He was one of them! 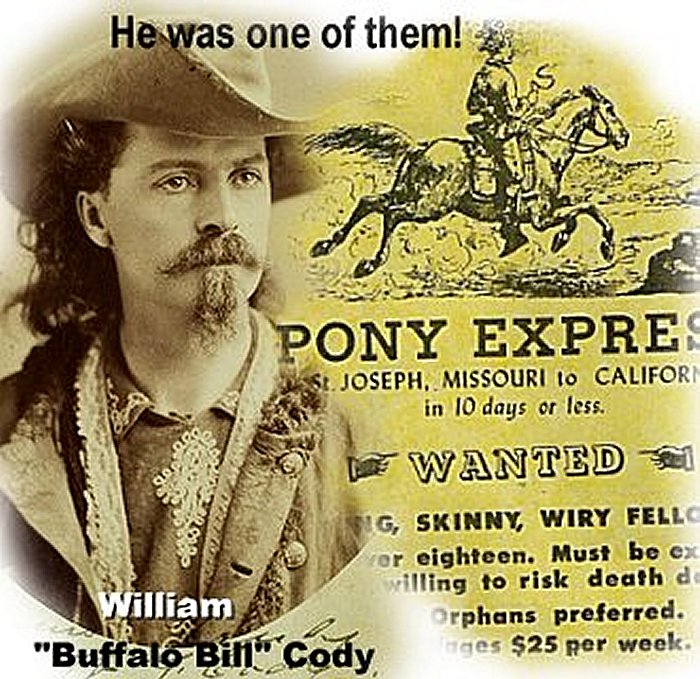 At a time, when the North and South of the nation were pulling apart, the Pony Express made a great job - helped the East and West of this great country connect together!

The Pony Express operated for only 18 months but it will always be remembered and its legend must go on...

Stephensons Rocket was the world's first modern steam locomotive and the railways expanded quickly from 1830 both in Europe and USA. Steamers sailing across the Atlantic Ocean, could deliver mail in 12 days instead of 30-36 days. Mail began to "travel" fast and today, modern postal systems can deliver mail by ship, road, or aeroplane.

Pre-modern systems were exclusively road-based networks relying on foot-couriers or riders on horseback. Mail was delivered by cannons, dog sleighs, skis, guns and hot air balloons, all had to be done to get the mail on time!

In France, in the region of Landes, postmen had to walk on high stilts to cross the wide marsh. Even today, Havasupai Indians, a Native American tribe living in the northwestern part of Arizona, get their mail delivered by mule. They are the only permanent inhabitants in the Grand Canyon, where they have lived for over 800 years.

They live at the foot of the Grand Canyon and a 10 km a steep, narrow path is the only way leading to them. It is not easy to deliver mail to them, but a mule is able to do it.

Delivery of letters has been one of the greatest concerns of mankind for at least five millennia.

Part 2 of this article - here.