Ellen Lloyd - AncientPages.com - Is it possible that death rays were used in ancient times? Can we find any traces that could offer evidence our ancestors were familiar with deadly high-tech weapons?

We begin our journey in ancient Greece where we encounter an intriguing description of how the Greek mathematician and scientist Archimedes, born in 287 B.C. , created a weapon that was based on technology and ideas far ahead of his time. 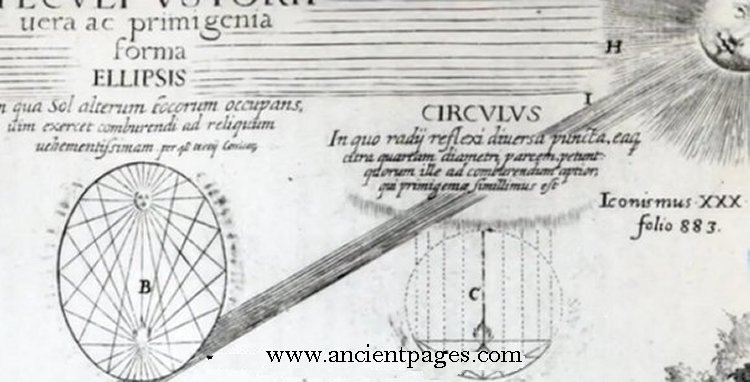 "Probably the most famous ancient death ray was the one that was built by the Greek inventor Archimedes.

He was able to create this giant mirror and parabolic disc and focus the sun's rays on a fleet and set the ships on fire," says David Hatcher Childress.
Was Archimedes really able to build such a formidable weapon?

If death ray weapons had been used in ancient times, there should be some form of tangible proof.

In fact, if we visit Scotland we find a number of ancient mysterious ruins. Many of them appear to be forts. The vitrified ruins of Scotland are one of the greatest mysteries of archaeology.

These ruins date back thousands of years. Many of them were subjected to a fire so intense that it practically turned the stone structure into glass.

This is a process generally known as vitrification. In order to achieve vitrification, temperatures in excess of 1000 degrees Centigrate would need to be applied consistently over large areas of the wall, in close proximity for a significant period of time.

Based on what is currently known, there are least 60 such forts scattered throughout Scotland. 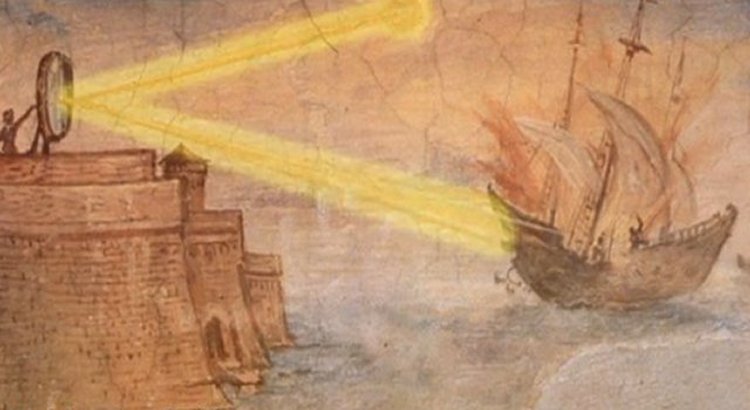 Among the most well-known are Tap o'Noth, Dunnideer, Craig Phadraig (near Inverness), Abernathy (near Perth), Dun Lagaidh (in Ross), Cromarty, Arka-Unskel, Eilean na Goar, and Bute-Dunagoil on the Sound of Bute off Arran Island. Another well-known vitrified fort is the Cauadale hill-fort in Argyll, West Scotland.

One of the best examples of a vitrified fort is Tap o'Noth, which is near the village of Rhynie in northeastern Scotland. This massive fort from prehistory is on the summit of a mountain of the same name which, being 1,859 feet (560 meters) high, commands an impressive view of the Aberdeenshire countryside. At first glance it seems that the walls are made of a rubble of stones, but on closer look it is apparent that they are made not of dry stones but of melted rocks!

Considering the high temperatures which have to be produced, and the fact that possibly sixty or so vitrified forts are to be seen in a limited geographical area of Scotland, it is highly unlikely that this type of structure is the result of accidental fires. 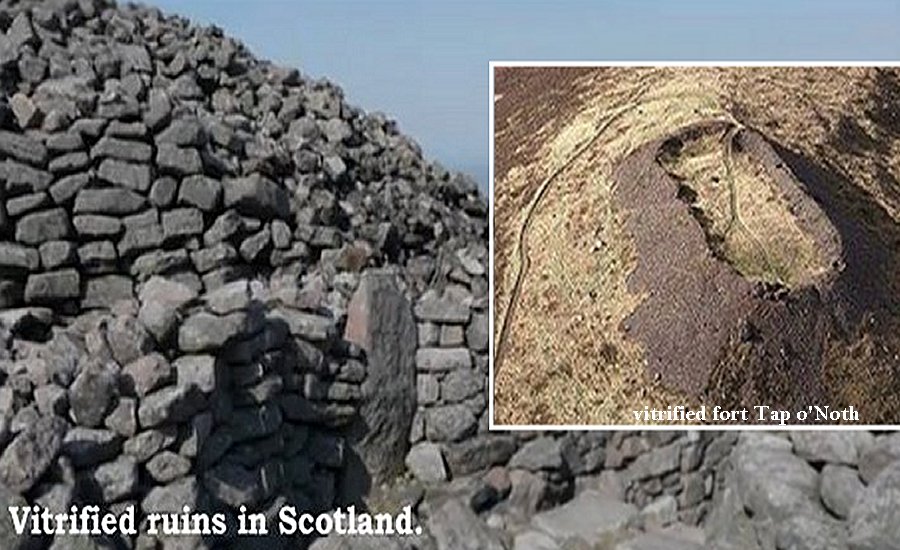 In this vitrification process, huge blocks of stones have been fused with smaller rubble to form a hard, glassy mass. A number of explanations for the vitrification have been put forward, but none of them is universally accepted.

Who or what could have subjected the ruins to extreme heats (over 1000?C), causing the rocks to melt and fuse together? Conventional fire could not have reached such heat.

Could a form of Greek fire have been responsible for the vitrification? Were ancient atomic weapons used in the distant past?

Are the ruins a result of a man-made apocalypse of a chemical nature? Many supporters of the Ancient Astronauts theory believe that the vitrified ruins fortifications found in Scotland should be considered evidence that death rays were used in ancient times. 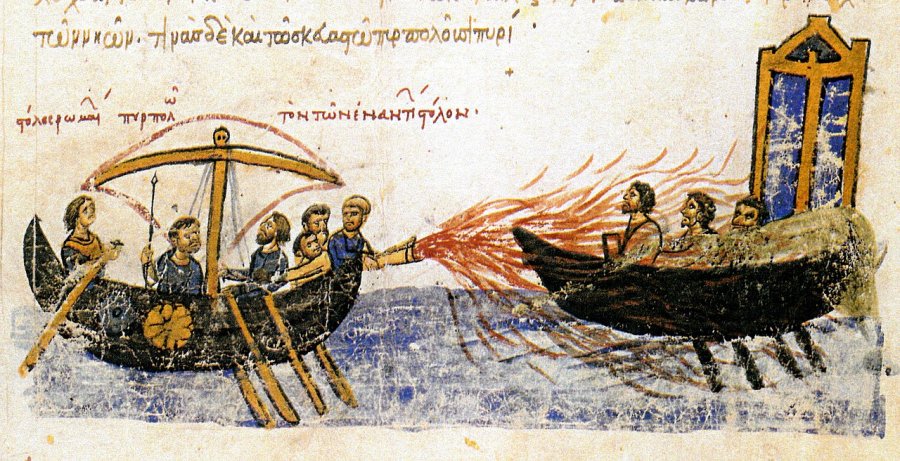 A Byzantine ship uses Greek fire against a ship of the rebel, Thomas the Slav, 821. 12th century illustration from the Madrid Skylitzes. Image credit: wikipedia

Can we find some information that could cast light on the mystery by investigating Celtic legends?

One of the Shining Ones in Ireland, was a god called Lugh. According to Celtic legend, Lugh was the Sun God and the God of War. Lugh possessed several deadly weapons, including a mighty magic spear. According to Irish mythology, in battle, the spear flashed fire and tore through the enemy ranks unchecked.

Vitrified ruins can be found in other parts of the world, such a France, Turkey, the Middle East, California's Death Valley and many other places.

Myth and legends from all across the world, tell of gods who possessed fantastic weapons that seemed like magic to our ancestors.

Today, our modern society has similar weapons. If we have been able to develop death rays, nuclear bombs, biological and chemical weapons, is it then not perhaps possible that an unknown highly advanced ancient civilization also had access to similar weapons?