David Tee - AncientPages.com - You have heard about these masters of stealth warfare and espionage.

If not from history books, then from the myriad of movies that use Ninjas as the warriors of an evil leader out to rule his part of the world. The Ninja were real and were trained in the ancient art of Ninjutsu.

The name Ninja refers to a profession. Unlike the Samurai, it did not give the warrior a place in any of the different Japanese societal classes. It was a role or job. A member of any class could join the Ninja.  When and where did the Ninja first appear?

The Ninja were not the first spies to be used by military leaders. They were just the better class of spies. They were better trained, more ruthless and far more lethal. 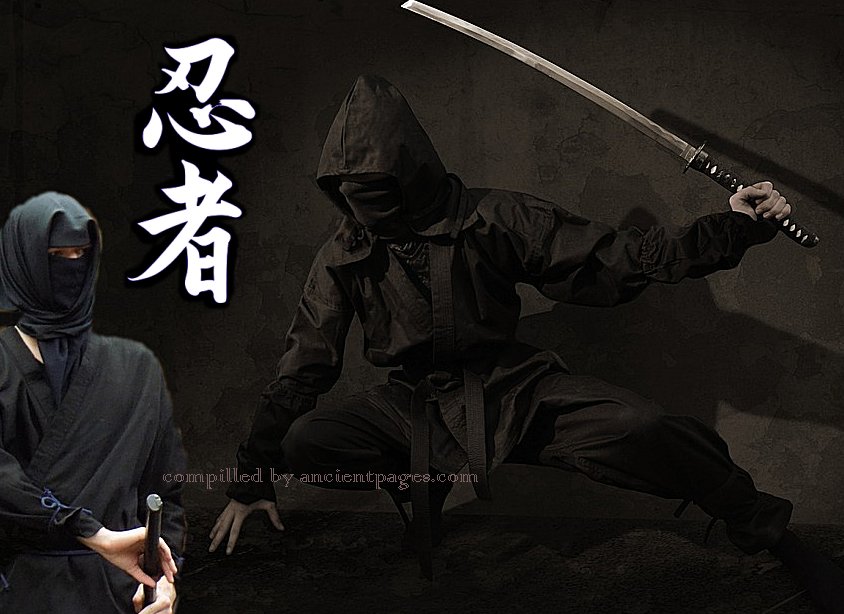 Their origins are actually shrouded in history. It is said that the escaping generals of the Tang Dynasty made their way to Japan and began teaching willing Japanese the art of Ninja warfare.

Another theory says that it was Chinese monks who brought their secrets to Japan, although it is not known how these monks would learn such details. It is said that the monks picked up their espionage strategies as they traveled from one place to another during the Seonaku era.

The Official Sources Of Ninja Existence

The official sources talking about Ninjas are rare.  Most likely because the activities and training of the Ninja were secrets that were not to be made known to just anyone.  The best-known documents were written in the Edo era. The three most accepted sources for the Ninja existence are the Bansenshukai or the Mansen Shukai,  Ninpiden or the Shinobi Hiden and Shoninki.

Two other sources, the Shomonki, written approx. in 940 AD, and the Taiheiki, written around the 14th century AD talk about Ninja activities. Other than those sources, any mention of the Ninja was relegated to family records and other non- official sources.

Daisuke Togakure And Kain Doshi And The First Ninja School

It may not actually be the first, but it is the first one of actual record. Daisuke Togakure was a Samurai who lost his title and lands in a key battle against a rival Samurai. Instead of committing Seppuku, honorable suicide, Daisuke Togakure traveled the country, where he met Kain Doshi, a warrior priest. Warrior priests and monks were not uncommon in Japan. Readers of Ancient Pages may recall the story about Sohei and Yamabushi, who were fearsome ancient warrior monks of japan.

Together, in the later years of the 12th century AD Daisuke Togakure and Kain Doshi began to teach their warfare tactics and strategies. They called it Ninjutsu. It is not sure if this pair taught other disgraced Samurai but most of the main leaders of the Ninja were Samurai who lost their position and lands.

Katana sword is among many weapons and tools commonly associated with the practice of the ancient art of Ninjutsu.

The majority of Ninja warriors came from the lower classes of Japanese society. Many were poor farmers and villagers looking for a way to protect what little they had. Women were not barred from becoming a Ninja. There were many female Ninja warriors who could use a variety of feminine disguises to help them spy or carry out assassinations.

The Ninja Of Legends

It was not long before the exploits of the Ninja warriors made it into legend. But these legends were greatly exaggerated. The myths and legends of Japan gave the Ninja great powers. They could walk on water and control animals. One legend has the Ninja profession rising from a half demon, half crow creature.

Like their origins, that too is hard to say. Jinichi Kawakami, the 21st leader of the Ban Clan, says it is claimed that he is the last Ninja. The Ban Clan is known for being part of the secret Ninja profession.

But there is no way to say for sure if he is the last or not. Because so many different families and clans participated in the Ninja role, and their work is always kept secret, no one can say for sure who is the last or if more do not survive today.

Mr. Kawakami is willing to let the Ninja secrets die with him as he does not believe there is a modern role for such people anymore. It is highly doubtful that many sinister people will let such knowledge die so easily.

Ashida Kim, Secrets Of The Ninja