Siberian scientists make discovery of 2,500 year old Saka settlement in up to 23 metres of water in Kyrgyzstan.

The new find at the lake is separate from the discovery in 2007 of the ruins of an ancient metropolis of roughly the same age and Scythian burial mounds under its waters. 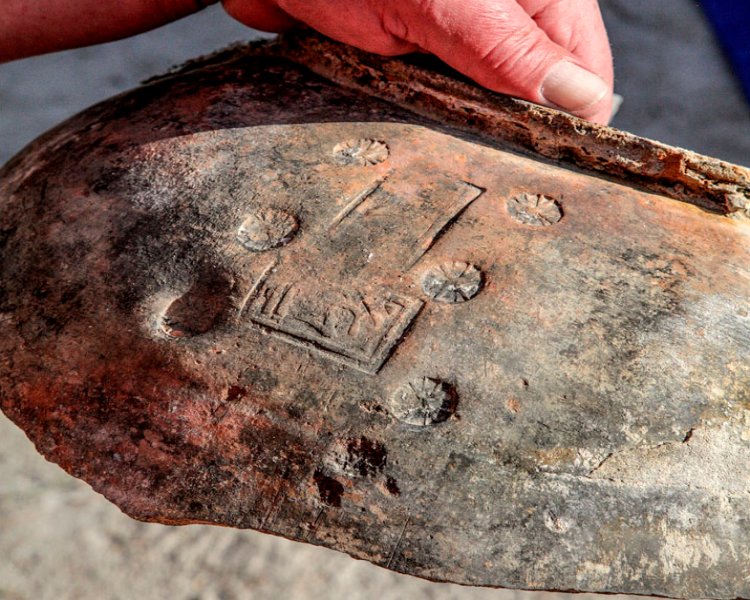 A piece of a large ceramic pot found in the lake has a stamp on it written in Armenian and Syrian scripts. Pictures: Dmitry Gorn

Divers from Tomsk State University say they have located another 'previously unknown' outpost of the ancient world, along with 200 artifacts from this long-lost culture. Our exclusive pictures show these finds,' The Siberian Times reports.

A piece of a large ceramic pot found in the lake has a stamp on it written in Armenian and Syrian scripts, which, if confirmed, gives credence to the theory that an Armenian monastery was on this site in Medieval times, it is claimed.

An intriguing version is that this remote lake was the last resting place of evangelist St Matthew, one of the 12 disciples of Jesus, and the find may support a theory that an Armenian monastery once existed here at which his relics were supposedly buried. 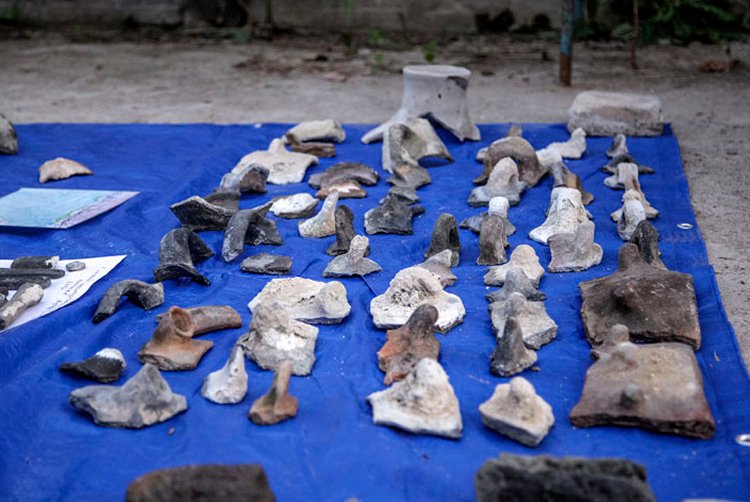 Dozens of artifacts were raised from the lake, which was located on the ancient Old Silk Road. Picture: Dmitry Gorn

Dmitry Gorn, director of Tomsk scuba diving 'Club SKAT TSU', who led the diving team, said the inscribed pot fragment was 'truly unique'. 'Experts are now working on the identification of the writings on the stamps, but it's supposed to be Armenian-Syrian script,' he said.

'If that proves to be correct, it will be further evidence that there was an Armenian monastery on Issyk-Kul in 14th century where, according to the legends, relics of Matthew were stored.'

The divers worked in Tup Bay, in the northeast of the lake, which is the tenth largest in the world and the second largest saline lake after the Caspian Sea. The expedition was led by Dr Vladimir Ploskikh, of the department of history and culture at the Kyrgyz-Russian University. 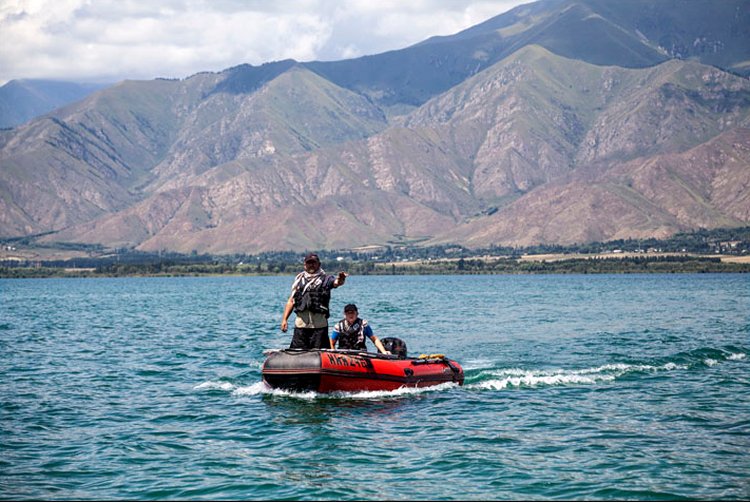 Dozens of artifacts were raised from the lake, which was located on the ancient Old Silk Road, he said. 'We lifted over 200 items among them mainly pieces of ceramics, whetstones for sharpening knives, a piece of bronze ritual sickle, and many pieces of slag and traces of casting production,' he said.

'We managed to find a complete ceramic jar, supposedly belonging to Saka-Usun culture  which was most likely used for rituals because it was found near a burial site.' This was found by Artyom Yeremin, a student of Tomsk State University. 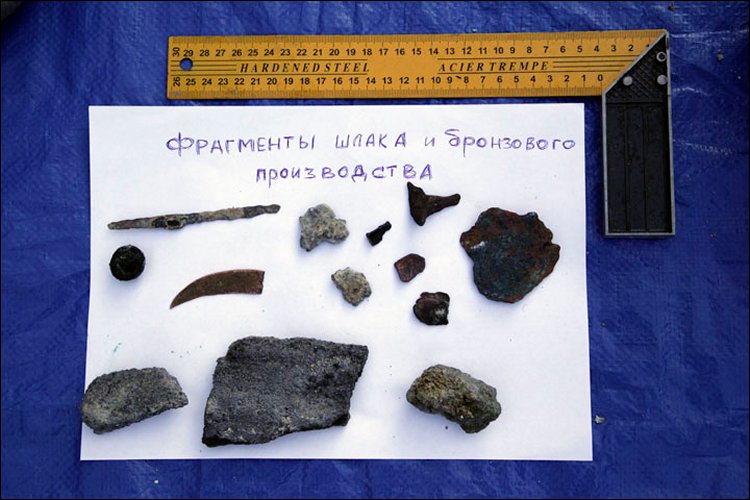 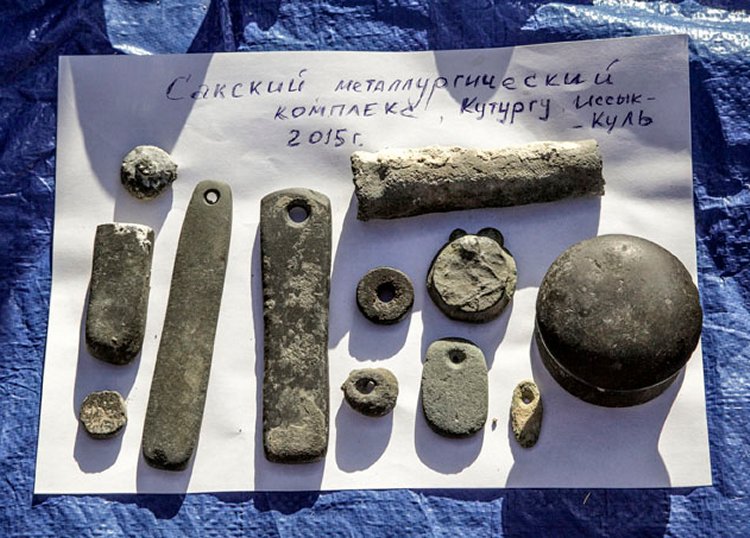 The pieces of slag and traces and tools of casting production found underwater. Pictures: Dmitry Gorn

Many Christian believers say that Matthew the Apostle's remains are in Salerno Cathedral, in Italy, which is dedicated to the saint. The Orthdox church has a different view, as set out by Vladimir, Metropolitan of Tashkent and Central-Asia.

He claimed that St Matthew's body - after a cruel death - was hidden by his followers, and buried on the beach of Issyk-Kul. 'St Matthew died in Syria. His followers, escaping from Rome's persecutions, brought the relics of the Apostle to this land,' he was quoted as saying. 'The sanctity was kept in an abbey, located on a beach of Issyk-Kul and all the Christian world knew about this fact.' 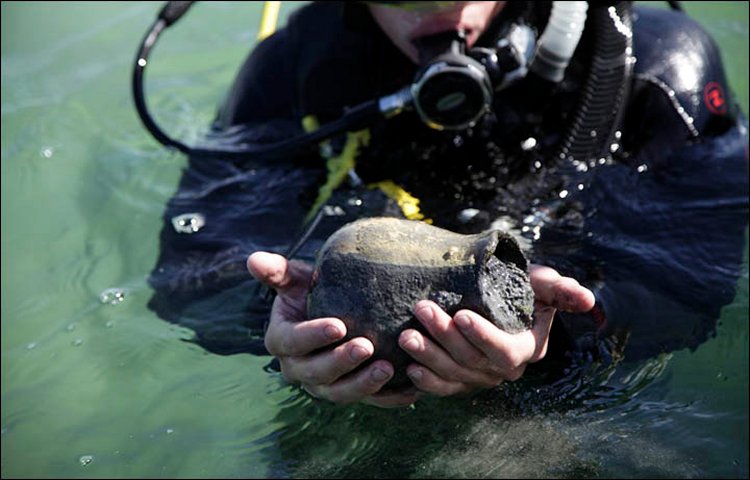 Divers from Tomsk State University say they have located another 'previously unknown' outpost of the ancient world. Picture: Dmitry Gorn

A 14th century map by cartographer Abraham Cresques is cited as supporting this view. In Tup Bay there are accounts of a vision of a flaming cross close to the presumed burial place of St Matthew.

The depth of the lake - which has no visible outlet of water - has varied considerably over the centuries. It was previously not as deep as it is today which means that these ancient settlements would once have been close to the lake's shore. In medieval times, the lake was some 8 metres (26 ft)  lower.

In 2007, Dr Ploskikh, vice president of the Kyrgyz Academy of Sciences, reported that archaeologists had discovered the remains of a 2500-year-old advanced civilization on the lake's floor.

Among the finds of this earlier discovery were bronze battleaxes, arrowheads, self-sharpening daggers, objects discarded by smiths, casting molds, and a faceted gold bar that was a monetary unit of the time. Ancient coins were also brought to the surface of the lake.

The Saka people were drinkers of Soma, an intoxicating liquor, and were mentioned by Herodotus. They lived in Central Asia.