A. Sutherland - AncientPages.com - The concept of fate dominates Norse mythology and to the Norse people, fate was a fact of life, something that could not in any way be avoided or changed.

So, it had to be met without fear; even death, the ultimate end, needed to be encountered with braveness. 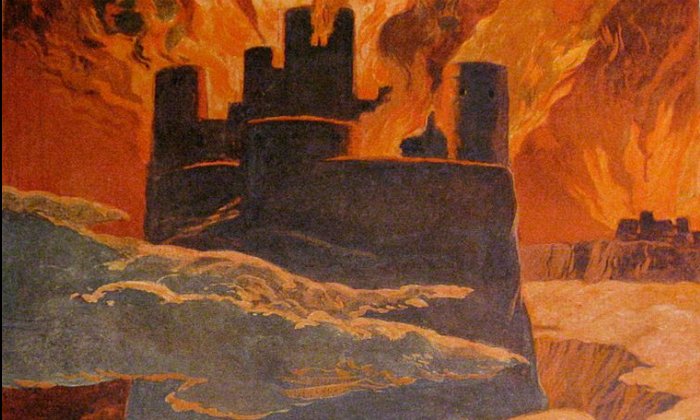 A scene from the last phase of Ragnarök, after Surtr has engulfed the world with fire. The surrounding text implies that this is Ásgarðr (Asgard) burning. Image source

This immutable concept culminates in Ragnarok (Ragnarök) – “the darkness of the gods”, the coming destruction of the world, whose inevitability is impossible to fight with. It is a prophecy that holds great implications for the course of mankind’s future.

Ragnarok ragna means organizing powers (like gods) and rok means fate or destiny and the whole term referred to the gods. The gods – the protectors of mankind – knew of Ragnarok and prepared for it daily. The onset of Ragnarok could not be stopped.

It was preordained so precisely that the details of what would happen were already known to them.

Brothers will fight and kill each other, sisters’ children will defile kinship. It is harsh in the world, whoredom rife-an ax age, a sword age-shields are riven- a wind age, a wolf age-before the world goes headlong. No man will have mercy on another…” (the “Elder Edda”)

Ragnarok was described in the Eddas (1250) a collection of Old Norse poems. The world was to be destroyed by fire and water, with steam and flames reaching high heavens.

Was this terrifying vision only inspired by volcanic eruptions or much more? During Ragnarok a huge earthquake will cause devastation, mountains will be shaken, the sun will disappear due to the clouds and smoke. Melting ice will cause floods of water to run alongside rivers of burning lava. 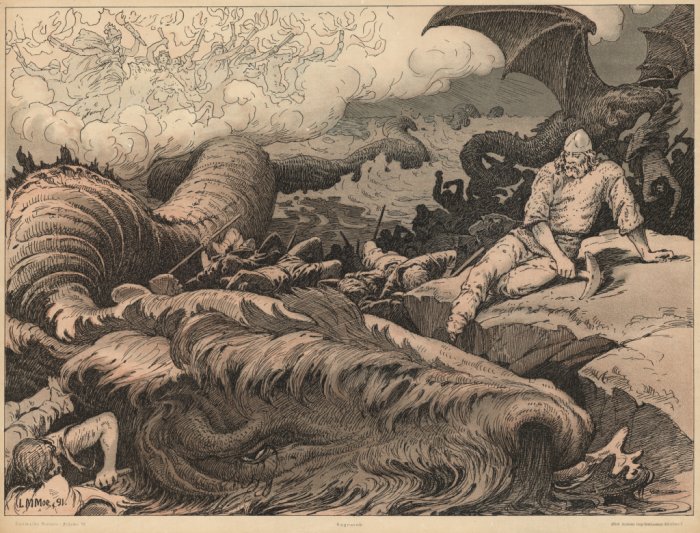 All trees will be uprooted, though the Yggdrasill “(World Tree”) will remain standing. The ash Yggdrasill is the tree-of-life; the tree of the ancient tree-worship; the tree which stands on the top of the pyramid in the island-birth place of the Aztec race; the tree referred to in the Hindoo legends.

It clearly is the vision of the Apocalypse as described by Snorri Sturluson in his famous Prose Edda (1222-23), who said that fierce battles will take place throughout the whole world for three terrible years.

A terrible winter will prevail and three such winters will follow, with no summers.

Is the Ragnarok that originates in the legends of the Scandinavians a record of the coming of the Comet? This is what Ignatius Donnelly suggests in his famous work “Atlantis: The Antediluvian World”.

“But even in this early morn; Faintly foreshadowed was the dawn Of that fierce struggle, deadly shock; Which yet should end in Ragnarok; When Good and Evil, Death and Life; Beginning now, end then their strife.” Valhalla (J. C. Jones).

This great apocalyptic event that concerns humanity as a whole, is mentioned in many myths and legends of different cultures around the world. Ragnarok is an important event in the Scandinavian world of myths and legends. It has been also repeated generation after generation, translated into all languages, commented on, criticized, and debated over and over again.

But even if Ragnarok (or Armageddon) was about the universal disorder; annihilation would not be total, after all.

Afterward, the world will resurface as new and fertile, the surviving and returning gods will meet, and the world will be repopulated by two human survivors (in the myths of Scandinavia, by Lif and Lifthrasir, who will have remained hidden in the ash of the mighty tree Yggdrasill, through Ragnarok’s terrible time.

Thus the end will contain the germ of a new beginning, and the cycle with start again, as it always does. The world is once more saved and Ragnarok is nothing but – past!