A. Sutherland - AncientPages.com - Mysterious, gigantic jar-like artifacts were found in several places around the world, and in some places, their origins remain obscure. For what purpose were they created and by whom?

What kind of substance could have been stored in these vessels, made of stone - durable and strong material? 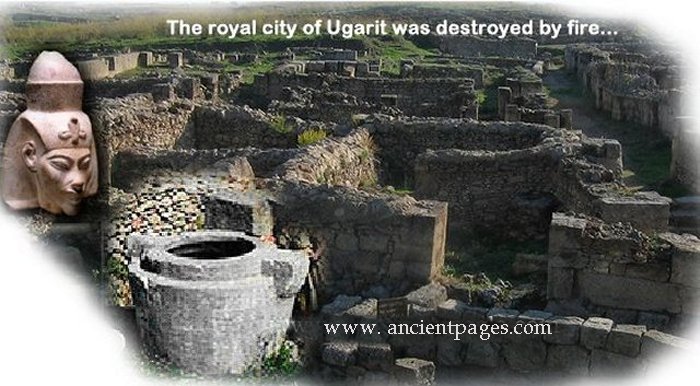 Not much is known about Ugarit in Syria, where mysterious jars were excavated. It is a place full of riddles.

As historical records say, Ugarit was destroyed by a mysterious catastrophe in the 14th century BC. "The royal city of Ugarit has been wasted by fire. Half the center is burnt, and the other half is no more.." Abimilki, king of Tyre wrote about the tragedy to the pharaoh Amenophis IV (Akhenaten).

What could cause such a great deal of damage and chaos of gigantic stone blocks? Some of them were hurled with enormous power for considerable distances. The havoc on this scale was definitely not caused by an earthquake. What kind of mysterious catastrophe turned large constructions into ruins and left the jars untouched, standing and waiting to be discovered?

Similar large (some over six feet tall) jars (pithoi), supposedly used for storing olive oil, wine, and cereals, were also found in the ruins of Knossos and Phaistos palaces in Crete. As ancient records say, the palaces were destroyed many times due to earthquakes and volcanic eruptions. Still the mysterious large vessels "survived" undamaged.

Both Knossos, Ugarit, and other great cities were destroyed at the same epoch and certainly not only by fire, which could not have been the only cause of the ruined massive walls and houses.

Who left hundreds of three- to ten-foot-tall stone urns scattered on a windy plateau of northern Laos?

The area is known as the Plain of Jars and is located in the Xiangkhoang Plateau, at about 1,000 meters above sea level in north-central Laos. Their origin also remains unknown, but they are supposed to be more than 2,000 years old. 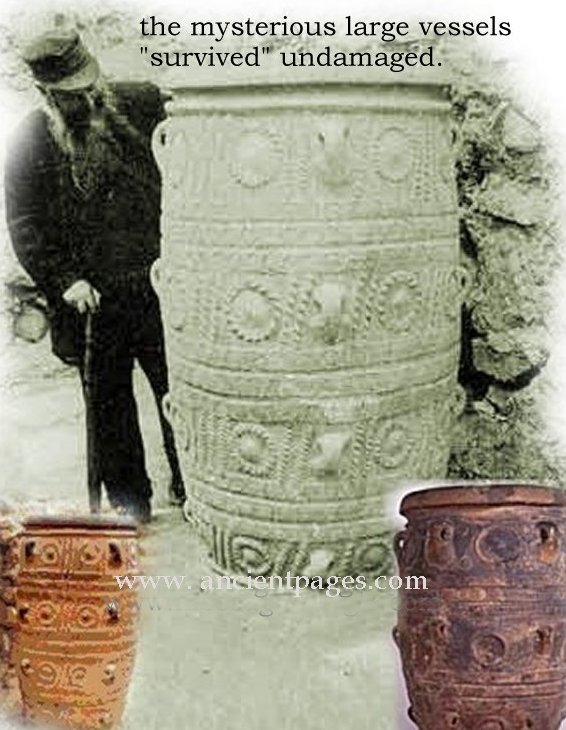 How could these stones artifacts, some weighing as much as seven tons (!) arrive to this part of Laos? Also in this part of the world, it is said that the mysterious urns were used to store or make wine. No one knows, however, what was their original function.

Only one enormous jar - located at the site closest to town and often visited by tourists - has a carved relief of a human being with knees bent and arms reaching to the sky.

In the 1930s, French archeologist Madeline Colani discovered some jars that contained bronze and iron tools, and bracelets, along with cowry shells and glass beads, while the rest of them appeared to have been looted. Colani documented the jars in a 600-page monograph, "The Megaliths of Upper Laos", concluding that they were funerary urns carved by a vanished Bronze Age people.

This theory has been strengthened by the more recent discovery of underground burial chambers. Cremated remains found in the jars suggest that they were funerary urns used over 2,000 years ago.

"They are disposed of without regularity, some of them pressing one against another, others quite isolated. Each one is fashioned from a separate block of stone, and a small number of them are very well executed, as though turned on a lathe, bespeaking the hand of a true artist..." Colani wrote about the jars found at the site Ban Ang, approximately a mile northeast of the provincial capital of Xieng Khouang province, Ponsavan, located in the center of the Plain of Jars. 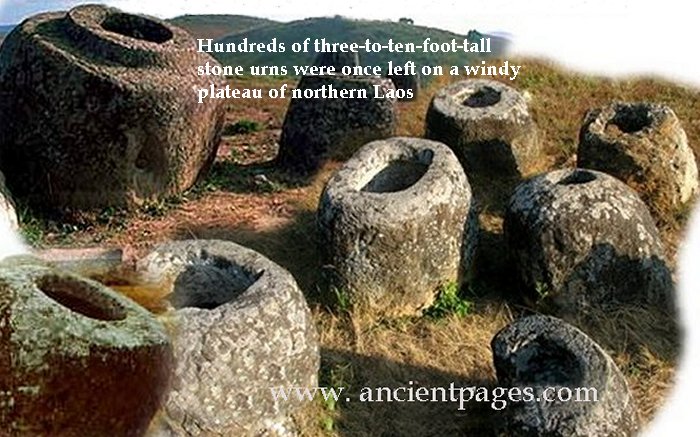 Excavations conducted in 1994, exposed the first anthropomorphic image recorded at the site of Ban Ang. On the side of one gigantic jar, there was a carved relief of a human figure with knees bent and arms reaching to the sky.

The Plain of Jars in central Laos is one of Southeast Asia's most mysterious prehistoric places. Approximately 90 sites scattered across miles of the plain contain thousands of gigantic stone jars, each weighing several tons.

No one was ever able to establish how these enigmatic artifacts got onto the plain, nor what purpose they once served. The theories regarding these structures range widely but despite many research efforts, no truly convincing explanation for their, centuries-long, existence was ever given.

And thus, the origin and reason for the Plain of Jars remain a mystery. 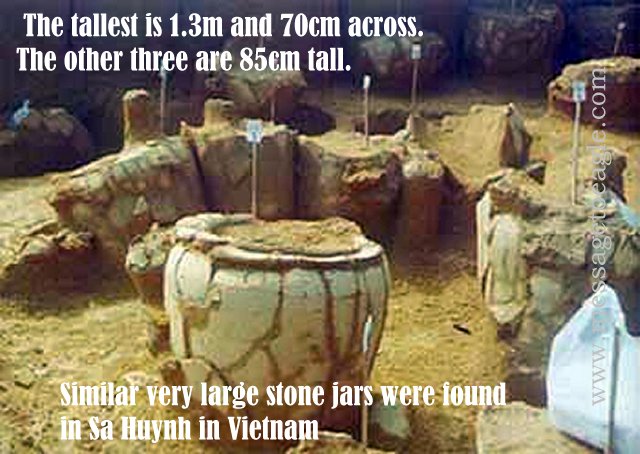 Similar very large stone jars were found in Sa Huynh in Vietnam and also in the North Cachar Hills of northeastern India, more than 600 miles to the northwest, had roughly the same design and dimensions as the urns in Laos.

"...Monolithic stone jars of the North Cachar hills... are clearly related and that pretty close to the stone jar necropolises of Vietnam, Celebes and Sumatra, and also no doubt to the monoliths of Dimapur and the latter group at Jamugari. The North Cachar Monoliths contained the ashes of the dead and bears a resemblance to stone cises and monoliths of Khasi Hills..." - G.P. Singh, "Historical Researches into Some Aspects of the Culture and Civilization of North-East India".

What human civilization had used these vessels in the household? In the area of today's Laos are whole fields dotted with such vessels.
Why were they made of stone? As we know, it is difficult to process this raw material. What was stored in such vessels and what could cause a breakdown of such powerful vessels?