Eddie Gonzales Jr. – AncientPages.com - Fossils of a tiny sea creature that died more than half a billion years ago may compel a science textbook rewrite of how brains evolved.

A study published in Science—led by Nicholas Strausfeld, a Regents Professor in the University of Arizona Department of Neuroscience, and Frank Hirth, a reader of evolutionary neuroscience at King's College London—provides the first detailed description of Cardiodictyon catenulum, a wormlike animal preserved in rocks in China's southern Yunnan province. 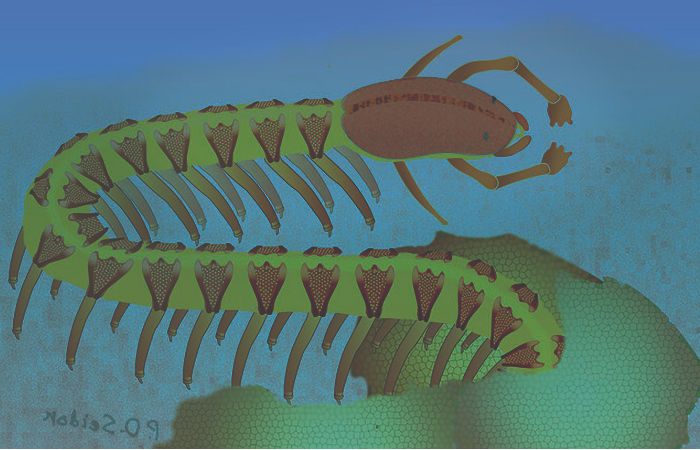 Artist's impression of an individual 525-million-year-old Cardiodictyon catenulum on the shallow coastal sea floor, emerging from the shelter of a small stromatolite built by photosynthetic bacteria. Credit: Nicholas Strausfeld/University of Arizona

Measuring barely half an inch (less than 1.5 centimeters) long and initially discovered in 1984, the fossil had hidden a crucial secret until now: a delicately preserved nervous system, including a brain.

"To our knowledge, this is the oldest fossilized brain we know of, so far," Strausfeld said.

Cardiodictyon belonged to an extinct group of animals known as armored lobopodians, which were abundant early during a period known as the Cambrian, when virtually all major animal lineages appeared over an extremely short time between 540 million and 500 million years ago. Lobopodians likely moved about on the sea floor using multiple pairs of soft, stubby legs that lacked the joints of their descendants, the euarthropods—Greek for "real jointed foot." Today's closest living relatives of lobopodians are velvet worms that live mainly in Australia, New Zealand and South America.

Fossils of Cardiodictyon reveal an animal with a segmented trunk in which there are repeating arrangements of neural structures known as ganglia. This contrasts starkly with its head and brain, both of which lack any evidence of segmentation.

"This anatomy was completely unexpected because the heads and brains of modern arthropods, and some of their fossilized ancestors, have for over a hundred years been considered as segmented," Strausfeld said.

According to the authors, the finding resolves a long and heated debate about the origin and composition of the head in arthropods, the world's most species-rich group in the animal kingdom. Arthropods include insects, crustaceans, spiders and other arachnids, plus some other lineages such as millipedes and centipedes.

"From the 1880s, biologists noted the clearly segmented appearance of the trunk typical for arthropods, and basically extrapolated that to the head," Hirth said. "That is how the field arrived at supposing the head is an anterior extension of a segmented trunk."

"But Cardiodictyon shows that the early head wasn't segmented, nor was its brain, which suggests the brain and the trunk nervous system likely evolved separately," Strausfeld said.

Cardiodictyon was part of the Chengjiang fauna, a famous deposit of fossils in the Yunnan Province discovered by paleontologist Xianguang Hou. The soft, delicate bodies of lobopodians have preserved well in the fossil record, but other than Cardiodictyon none have been scrutinized for their head and brain, possibly because lobopodians are generally small. The most prominent parts of Cardiodictyon were a series of triangular, saddle-shaped structures that defined each segment and served as attachment points for pairs of legs. Those had been found in even older rocks dating back to the advent of the Cambrian. 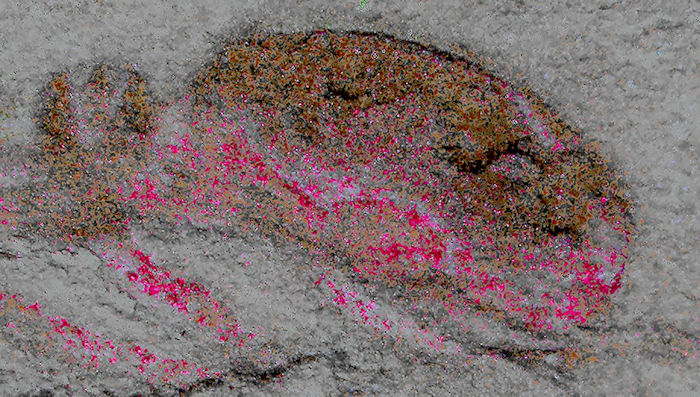 "That tells us that armored lobopodians might have been the earliest arthropods," Strausfeld said, predating even trilobites, an iconic and diverse group of marine arthropods that went extinct around 250 million years ago.

"Until very recently, the common understanding was 'brains don't fossilize,'" Hirth said. "So you would not expect to find a fossil with a preserved brain in the first place. And, second, this animal is so small you would not even dare to look at it in hopes of finding a brain."

However, work over the last 10 years, much of it done by Strausfeld, has identified several cases of preserved brains in a variety of fossilized arthropods.

A common genetic ground plan for making a brain

In their new study, the authors not only identified the brain of Cardiodictyon but also compared it with those of known fossils and of living arthropods, including spiders and centipedes. Combining detailed anatomical studies of the lobopodian fossils with analyses of gene expression patterns in their living descendants, they conclude that a shared blueprint of brain organization has been maintained from the Cambrian until today.

"By comparing known gene expression patterns in living species," Hirth said, "we identified a common signature of all brains and how they are formed."

The fossilized Cardiodictyon catenulum was discovered in 1984 among a diverse assemblage of extinct creatures known as the Chengjian fauna in Yunnan, China. In this photo, the animal's head is to the right. Credit: Nicholas Strausfeld/University of Arizona

In Cardiodictyon, three brain domains are each associated with a characteristic pair of head appendages and with one of the three parts of the anterior digestive system.

"We realized that each brain domain and its corresponding features are specified by the same combination genes, irrespective of the species we looked at," added Hirth. "This suggested a common genetic ground plan for making a brain."

Hirth and Strausfeld say the principles described in their study probably apply to other creatures outside of arthropods and their immediate relatives. This has important implications when comparing the nervous system of arthropods with those of vertebrates, which show a similar distinct architecture in which the forebrain and midbrain are genetically and developmentally distinct from the spinal cord, they said.

Strausfeld said their findings also offer a message of continuity at a time when the planet is changing dramatically under the influence of climatic shifts.

"At a time when major geological and climatic events were reshaping the planet, simple marine animals such as Cardiodictyon gave rise to the world's most diverse group of organisms—the euarthropods—that eventually spread to every emergent habitat on Earth, but which are now being threatened by our own ephemeral species."

The paper, "The Lower Cambrian Lobopodian Cardiodictyon Resolves the Origin of Euarthropod Brains" was co-authored by Xianguang Hou at the Yunnan Key Laboratory for Paleontology in Yunnan University in Kunming, China, and Marcel Sayre, who has appointments at Lund University in Lund, Sweden, and at the Department of Biological Sciences at Macquarie University in Sydney.