A. Sutherland  - AncientPages.com - In Icelandic mythology, Gryla (Grýla) is a giantess who lives in the mountains of Iceland.

She is mentioned in Snorre Sturluson's Prose Edda, from the 13th century as the most horrible sorcerer who scared children into obedience. 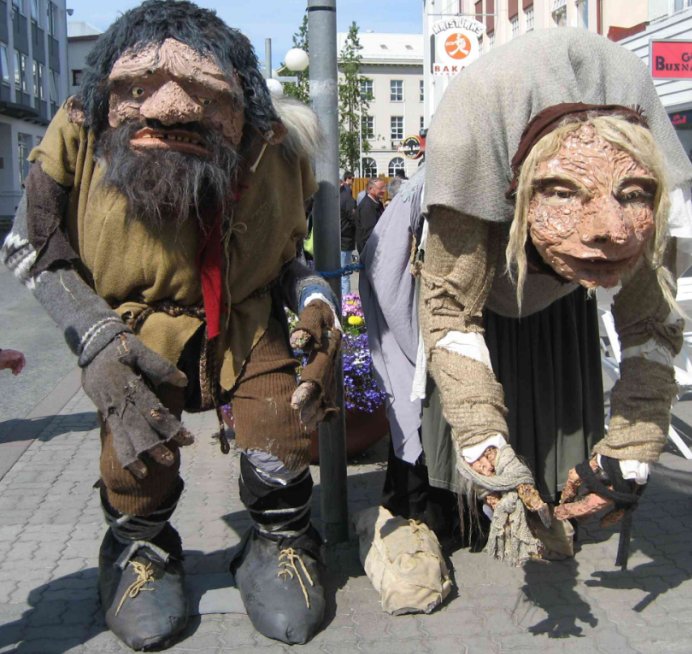 Grýla and Leppalúði on the main street of Akureyri, Iceland. source

Many stories about Gryla have long scared Icelandic children, and they did not dare to go out during Christmas time, but her role changed much with time.

Now, Gryla (her name means 'a scare' or 'something that scares') is strongly connected with the Christmas time, though this connection appeared for the first time in the 17th/18th century. Since then, it has been forbidden to talk about Gryla and frighten children.

Gryla is a cannibalistic troll, often described as having horns and hoofs, a large warty nose, and thirteen or fifteen tails, according to Sturlunga Saga. On each tail, she had 100 sacks, and in each of them, she stuffed disobedient children.

She was known to have not one but many heads. The troll's evil nature perfectly reflects Gryla's hideous appearance.

She lives in a distant and isolated mountain cave somewhere in the highlands of Iceland, with thirteen naughty sons - the Jolasveinar, and her elderly and disabled (or lazy) husband, Leppaludi. She had several husbands before she met. Leppaludi, but when tired of them, she eliminated them. 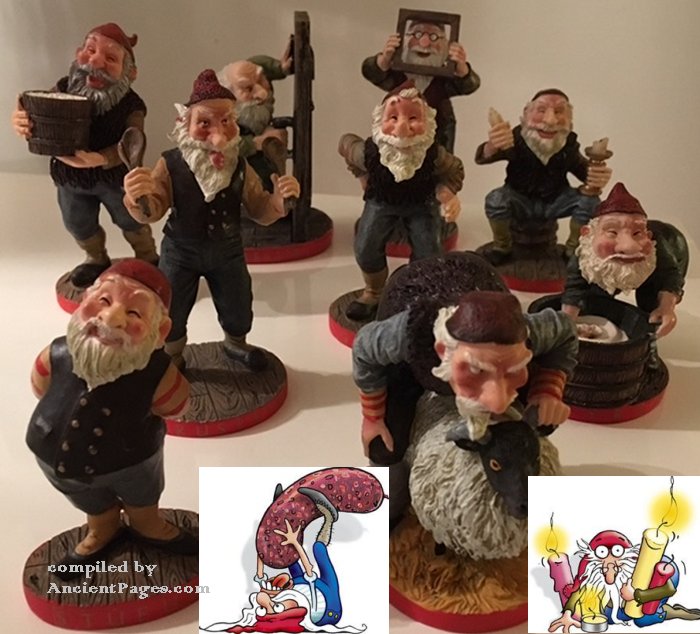 According to tradition, Gryla’s thirteen sons come to town one by one during the last 13 nights before Christmas (Yule), beginning 12 December.

Here is a list of the Yule Lads (in the order they visit the children):

Stekkjarstaur (Sheep chain post) - harasses sheep, but is hindered by its wooden leg.

Giljagaur (The Gorge) - hides in the ditches and ravines and runs into the barn and
steals the cows' milk when given the chance.

Stúfur (Abnormally Short) - is unusually short and steals frying pans to eat up the leftovers.

Askasleikir (Bowl-Licker) - hiding under the bed and stealing bowls that people put down.

Skyrgámur (Skyr-Gobbler) - steals and eats up all skyr (Icelandic yogurt).

Gluggagægir (Window-Peeper) - peeks at people, and searches of things to steal.

Gáttaþefur (Doorway-Sniffer) - has an abnormally large nose and an acute sense of smell to locate leaf bread (laufabrauð).

Ketkrókur (Meat-Hook) - has a hook with which he steals meat.

Kertasníkir (Candle-Stealer) - follows children in order to steal their candles. 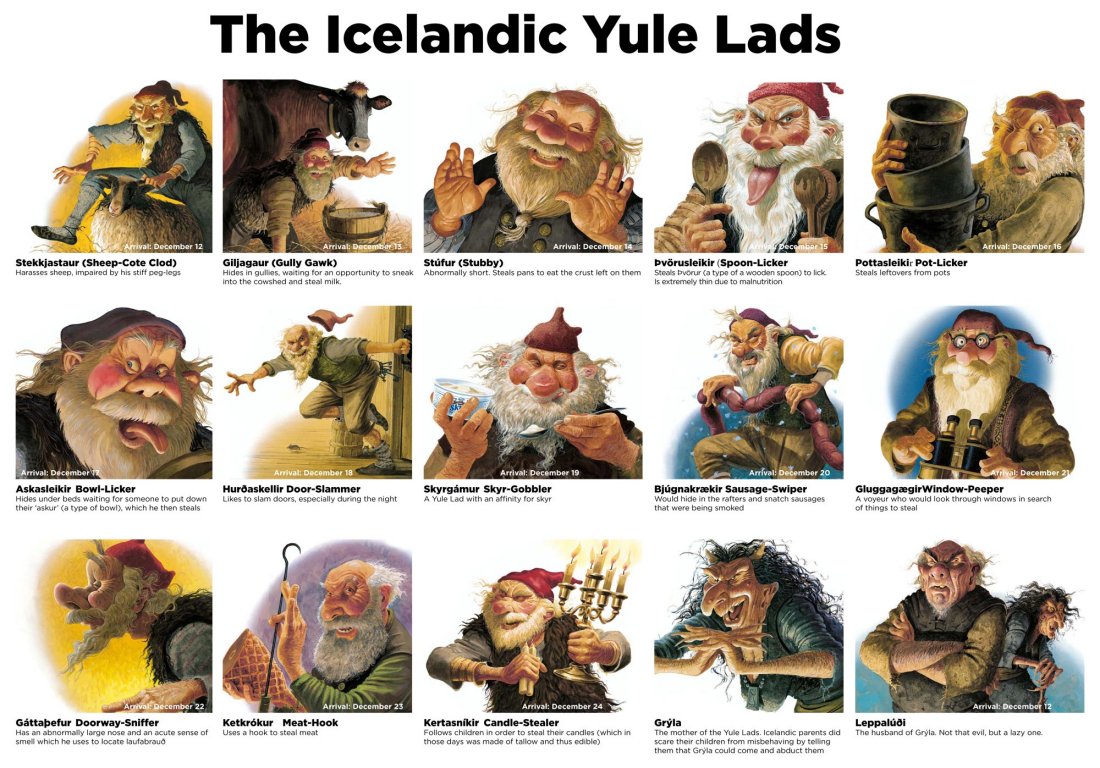 They are typical pranksters who are busy with stealing or harassing. They also participate in the Icelandic Christmas celebrations and even leave small Christmas gifts for children whose behavior (at least around Christmas) has been considered exemplary. The children place shoes on window sills, but if the child has been disobedient, they instead place a potato in the shoe.

Gryla Is Still An Important Figure In Icelandic Christmas Tradition

According to the oldest poems, Gryla originally lived in a small cottage. She was a persistent and troublesome beggar who walks around, asking parents to give her their disobedient children. Her plans were most certainly thwarted by giving her food or by merely chasing her away.

In any case, one day, Gryla was forced to move out of town with her family.

Gryla likes to eat human flesh, especially that of naughty children, for which she has a voracious appetite. Her favorite food is a stew of disobedient kids, which she cooks in her large cauldron to provide food for herself and her family.

Legend has it that there is never a shortage of food for Gryla, who has the ability to quickly and easily locate children who misbehave badly year-round. Early sources described Gryla once as a creature having multiple heads; modern depictions show her with one head only.

Gryla - accompanied by her pet, the 'man-eating' Christmas Cat (jólakötturinn) remains a prominent figure in the Icelandic Christmas tradition, but she is no longer a scary, evil troll.

Of all the people living in the North, it is among the Icelanders that ancient beliefs are most popular.