Conny Waters - AncientPages.com - Scientists from the University of Zurich examined a unique leather scale armor from the grave of a horseman in northwest China. The style and construction suggest that the tank was made between the 6th and 8th centuries BC in the Neo-Assyrian Empire and was transported to China from there. 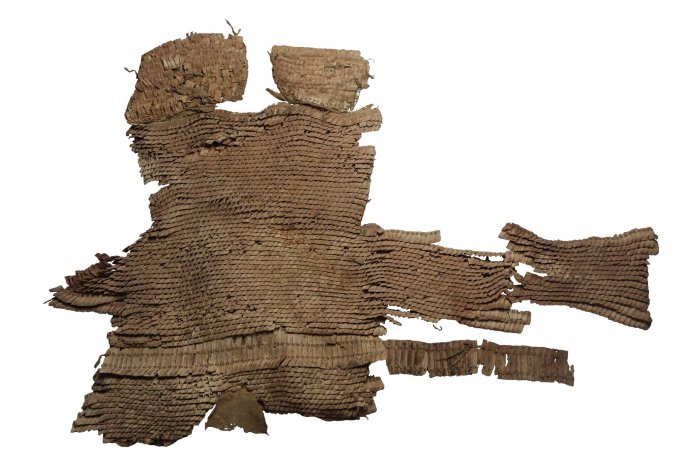 The old leather scales armor could be dated to the period between 786 and 543 BC. (Image: DL Xu, P. Wertmann, M. Yibulayinmu)

An almost completely preserved leather scale tank was first discovered in 2013 in the grave of a 30-year-old man near today's city of Turfan in northwest China. Due to the extreme drought, the find was able to last for thousands of years and provided the international team headed by Patrick Wertmann from the Asia-Orient Institute at the University of Zurich with new knowledge about the spread of military technology in the first millennium BC.

Scale armor protected the vital organs like a second skin, but without restricting the fighters' freedom of movement. Like the scales of a fish, the overlapping rows of plates were sewn onto a solid surface. Due to the costly materials and the elaborate production, such armor was valuable and was considered a privilege of the elite. They were seldom given to the warrior in the grave. In ancient times, however, with the emergence of powerful states and large armies, inexpensive, effective armor made of leather, bronze or iron had to be developed for simple soldiers as well.

Standardized production for the cavalry army

The scientists were able to date the old armor to the period between 786 and 543 BC using radiocarbon dating. Originally a total of 5444 small and 140 large cowhide scales were used for the production. Together with leather cords and the inner lining, the total weight was 4 to 5 kilograms. The shape is reminiscent of a vest that protects the wearer's upper body in the area of ​​the chest, groin, sides and lower back. The tank could be put on quickly and independently and was suitable for different body sizes.

“The find is a professionally manufactured mass product,” summarizes Wertmann. When the wars in the Middle East were increasingly fought with horse chariots, special armor for mounted soldiers was developed from the 9th century BC and later belonged in standardized form to the typical military equipment of the New Assyrian Empire, which extends over parts of what is now Iraq, Iran , Syria, Turkey and Egypt.

Although the find of the 2700-year-old scale armor is unique in the entire area of ​​northwest China, a second piece of contemporary armor of unknown origin in the Metropolitan Museum of Art New York (MET) shows stylistic and functional similarities. The two armors could have come from different military units in the same army: that of Yanghai may have been used by the cavalry, the other by the infantry.

Whether the wearer of the Yanghai armor was himself a foreign soldier who was in the service of the Assyrian army and brought the equipment home, or whether he captured the armor from someone who was there, cannot be clarified. "Even if the exact route of the scale armor from Assyria to northwest China can no longer be reconstructed, the find is clear evidence of the military technology transfer across the Eurasian continent in the early first millennium BC," says Wertmann.