Jan Bartek - AncientPages.com - Some may wonder how a giant geoglyph like this one hasn’t been noticed until now, but there is an explanation.

Located about 400 km south of Lima and listed as a UNESCO World Heritage Site, the Nazca Lines in Peru cover a staggering 1 000 square kilometers and the place has been described as “the most outstanding group of geoglyphs anywhere in the world”. 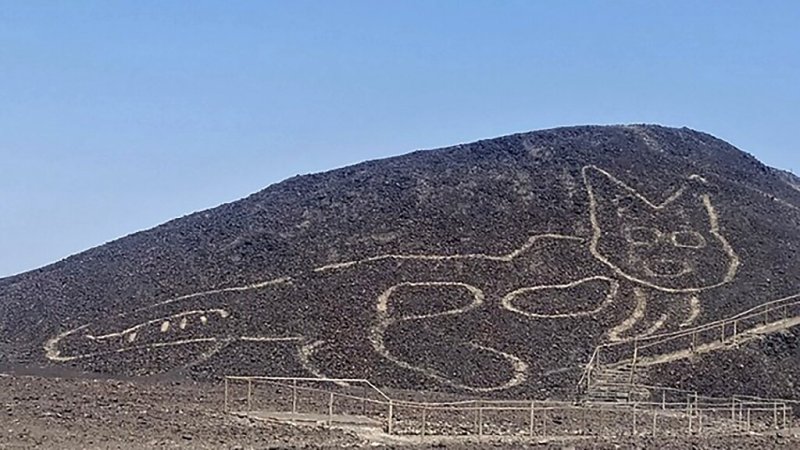 This photo released by the Peruvian Ministry of Culture and taken on October 15, 2020 shows a giant cat figure etched into a slope at the Unesco world heritage site in the desert near the town of Nasca in southern Peru.

In recent years, scientists have discovered hundreds of ancient geoglyphs, and there is reason to suspect there could still be many more unknown geoglyphs we simply have not detected yet.

This faded, partially eroded outline of a cat stretching across a desert hillside was recently found by workers. The geoglyph, around 120 feet (37 meters) long was on the brink of disappearing but archeologists took on the job of cleaning and preserving the geoglyph, which shows a cat with its body in profile but its head front on.

"The figure was barely visible and was about to disappear due to the effects of natural erosion as it's on a fairly steep slope," said the country's Ministry of Culture.

Based on its stylistic features, the figure dates from the late Paracas period, around 100 B.C. to 200 B.C.

"Representations of felines of this type are frequent in the iconography of ceramics and textiles of the Paracas society," the ministry said in a press release.

Johny Isla, archaeologists for the Nazca Lines site told Spanish news agency Efe that the cat looks very similar to cat motifs on textiles from the Paracas culture, which flourished in the area between 500 BCE and 200 CE—centuries before the Nazca culture, which usually gets credit for most of the alley’s geoglyphs.

Whether the figure depicts a modern domestic cat is unknown. Archaeologists aren’t yet sure what species the Paracas artists were trying to represent, but the answer might tell us something about the figure’s purpose and the Paracas’ view of the world. The location might also offer some hints about the cat’s purpose.

In recent years, researchers report they have discovered many spectacular, never before seen geoglyphs on the Nazca Plateau and its surroundings in Peru. 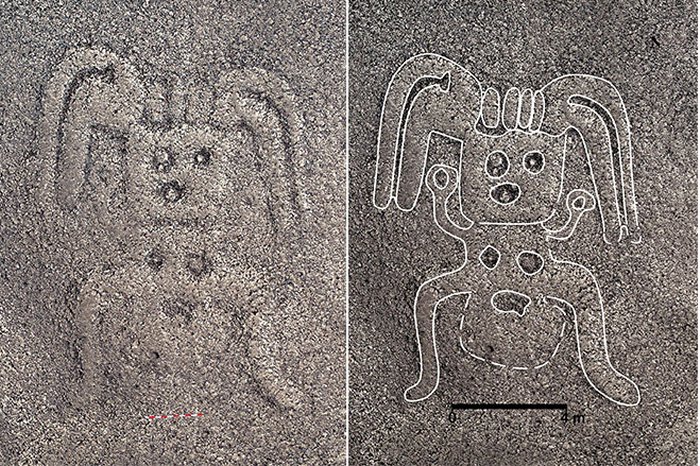 One of the geoglyphs is a square-headed being that has a human form. Credit: Yamagata University

Among them is an odd square-headed creature that has a human form. The amazing geoglyph is 5-meter-long. There are also spectacular geoglyphs of two-headed snakes, cats, and what appears to be a dinosaur.

Enormous figures have been spotted by low-flying drones. Among them were figures of a killer whale and a dancing woman.

Not long ago archaeologists also discovered a giant Orca geoglyph along with mysterious symbols and a ‘trophy head’.

Relying on high-tech it’s likely scientists can soon find more geoglyphs at the Nazca plateau, and perhaps even other sites that are are not so easy to access or can only be accurately studied from the air. 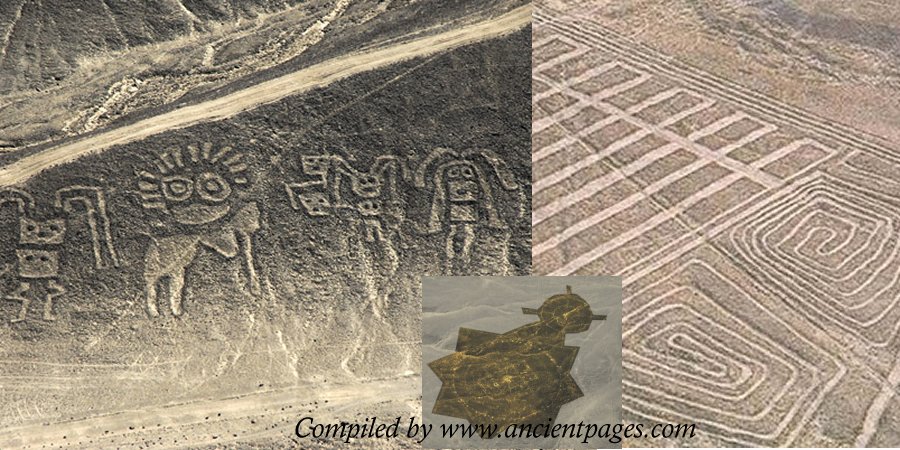 The Palpa lines are located in between the towns of Sacramento, Pinchango, and Llipata. The purpose of the lines and geoglyphs is unknown. There are as many as 600 geoglyphs of giant size and they represent a series of human and animal zoomorphic figures, including the Familia Real (Royal Family), a group of eight figures on a hillside. Credit: Ancient Pages

The Nazca Lines are legendary and of great interest to archaeologists and historians, but let us not forget about another curious and impressive site nearby.  In the vicinity of the Nazca Lines, we find a site called the Palpa Lines.

As Ancient Pages wrote earlier, “the enigmatic Palpa lines in Peru are not as famous as the Nazca Lines, but these puzzling lines and geoglyphs that can only be properly viewed from the air are equally interesting.