A. Sutherland - AncientPages.com - In the Inca and Aymara mythologies, Supay ('Andean Devil') was both the god of death and powerful ruler of the Incan underworld Ukhu Pacha (Uku Pacha), as well as a race of demons.

Supay was responsible for balancing good and evil. 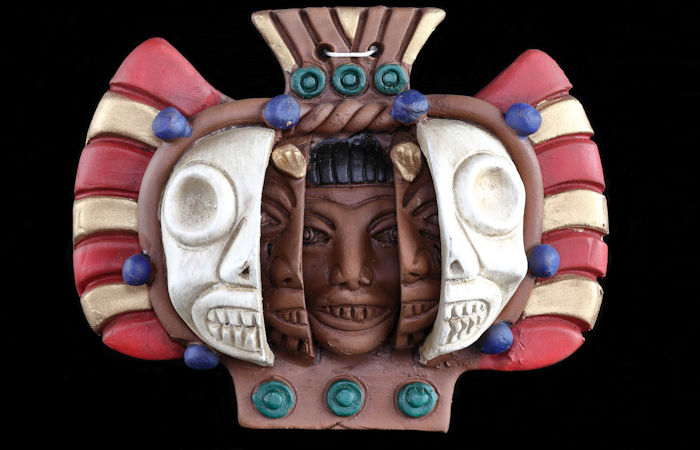 Unlike Europeans, the indigenous people did not reject Supay. They were so afraid of him that they invoked him and begged him not to harm them. Credit: Adobe Stock - JIT

Supay is listed as one of the evilest gods. Despite this negative view, many Inca people worshiped him because they believed in his power to grant them favors through offerings and rituals. He was the one who protected the path of the dead. The Incas believed that death was a new beginning with the Inca gods.

Depicted as a figure with a certain resemblance to demons (jaguar head, longhorns, very perceptive eyes, puma body, and sharp teeth. Supay was a shapeshifter that could surprise by taking the form of an Inca woman or a handsome Inca man; in the same way, he could transform into any animal he wanted.

The domain of Supay was located in the deep earth, and his underworld is also known as "inner world" or "below world", therefore, as the god of minerals, Supay was worshipped by miners. Today, his worship is still alive among Andean miners and excavators.

According to Inca mythology, the god Supay's underground realm was Ukhu Pacha (Uku Pacha), one of three realms (or 'pacha') that divides the cosmos.

Two other realms are Hanan Pacha, Kay Pacha, which along with Ukhu Pacha clearly resemble Catholic beliefs in the earth, heaven, hell, a concept also known in other religions.

Chronicler and writer Garcilaso de la Vega (1539 – 1616), son of a Spanish conquistador and an Inca noblewoman born in the early years of the conquest, was widely recognized for his histories about Inca history, culture, and society. In his 'First Part of the Royal Commentaries of the Incas', de la Vega characterized Supay's Uku Pacha as an underworld, a place of pain and suffering.

It was the 'lowest earth, where they said that the wicked were sent; and to describe it more clearly they gave it another name – supaypa-huasin, which means 'the house of the devil.'

However, Uku Pacha underworld was not considered as an entirely negative concept. In his 'Handbook of Inca Mythology', Paul Steele says that Uku Pacha was linked to 'the feminine earth mother and the bones of the ancestors,' and Incas regarded the place's subterranean water as life-sustaining springs, which link the human realm with the inner world.

When the Spaniards colonized the Americas, Christian priests used the name 'Supay' while referring to the Christian Devil. Unlike Europeans, the indigenous people did not reject Supay. They were so afraid of him that they invoked him and begged him not to harm them.

Today, ancient symbolism of this terrifying mythological figure, which is today called 'diablo', has been replaced with another practice, which makes Supay the main character used in traditional carnival known as 'diablada, an important part of the cultural traditions of in Bolivia, Chile, Peru, and other Andean countries.

The Diablada (or 'Danza de Los Diablos', which means 'Dance of the Devils') is a popular dance characterized by the mask and devil suit worn by the performers.

The Spaniards destroyed the Incan empire and took control over the country, yet the ancient belief in  Supay lives on in the daily lives of indigenous Peruvians. The Catholic Church became the dominant religious power in Peru, and the word 'Supay' applies to the Devil.

Klauser William., The Esoteric Codex: Deities of the Underworld