It has long been known that ancient artifacts displayed far more colors than one would think when looking at the bright white statues and temples, left behind for today.

These are paint samples taken from the column capital. Under the green paint layer is a beige layer, interpreted as a ground applied to prepare the stone surface before painting. Credit: Ole Haupt/SDU

The statues and buildings only appear white today because the colors have degraded over time; Initially, lots of colors were in use. This was also true for King Apries I's palace in Ancient Egypt. This palace was situated in the Nile Delta, and from here King Apries ruled from 589 to approx. 568 BC.

Fragments of the palace are today kept at the Glyptoteket Museum in Copenhagen, and recently they have been the focus of a collaboration between archaeologists from Glyptoteket, the British Museum, the University of Pisa and a chemist from the University of Southern Denmark.

"We are interested in learning more about the use of pigments, binders and the techniques associated with using them in the Antiquity, "Cecilie Brøns, classical archaeologist at Glyptoteket, said in a press release.

"It has obvious relevance for art historians, but it can also tell us about how different cultures in the Mediterranean and the Near East exchanged materials and knowledge and thus connected." 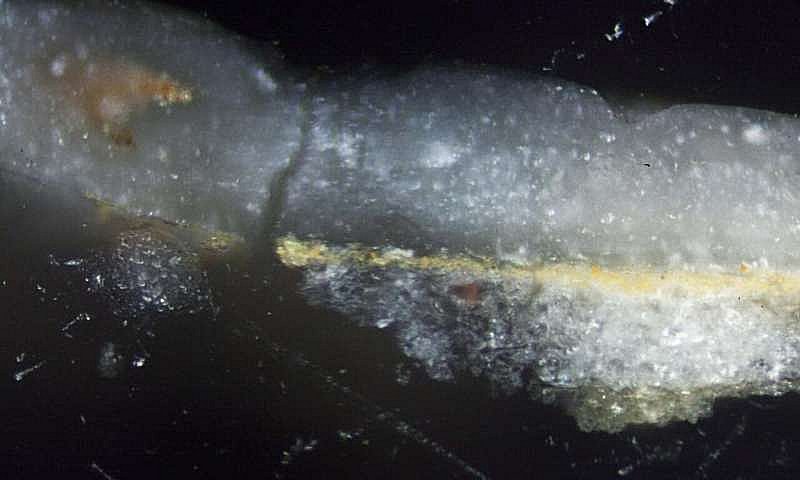 This is yellow paint from the Palace of King Apries I. Credit:Ole Haupt/SDU

Professor Rasmussen is an expert in conducting advanced chemical analyses of archaeological objects. Among other things, he has examined the beard of renaissance astronomer Tycho Brahe, Italian monk skeletons, medieval syphilis-infested bones, sacred relics, and the Dead Sea Scrolls.

"We have discovered no less than two pigments whose use in Antiquity has hitherto been completely unknown," said professor of archaeometry Kaare Lund Rasmussen from the University of Southern Denmark, who has taken samples of the palace fragments to learn more about the pigments and binders used.

These are lead-antimonate yellow and lead-tin yellow. Both are naturally occurring mineral pigments.

"We do not know whether the two pigments were commonly available or rare. Future chemical studies of other antiquity artifacts may shed more light," Rasmussen said. 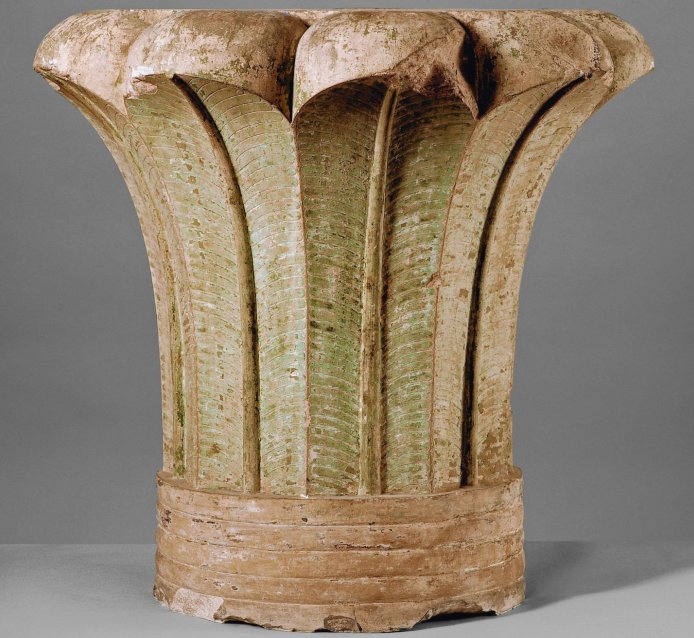 Paint samples were taken from this column from Palace of King Apries I. Credit: Ole Haupt/SDU

Analyzing binders is more difficult than analyzing pigments. Pigments are inorganic and do not deteriorate as easily as most binders which are organic and therefore deteriorate faster.

The rubber is probably tapped from an acacia tree and served as a solvent for powdered pigment. Rubber was widely used as a binder, and it has also been found on stone columns in the Karnak Temple and murals in Queen Nefertiti's tomb.

Animal glue was also commonly available. It was made by boiling animal parts, in particular, the hides and bones, in water to a gel-like mass that could be dried and pulverized. When needed, the powder was stirred with warm water and ready to use.

Research is published in the journal Heritage Science.