A. Sutherland - AncientPages.com - The ancient great city of Timgad is the largest Roman settlement ever built in North Africa. Located on the northern slopes of the Aures Massif, approximately 170 km south of the Mediterranean coast, the town (ancient name: Thamugadi) was created by Emperor Trajan in AD 100.

It served as a Roman military garrison town and its plan, laid out with great precision, illustrates skills of Roman urban planners. The outpost, established on a perfect square grid, it had to control one of the main passes through the Aures Mountains to the Sahara. 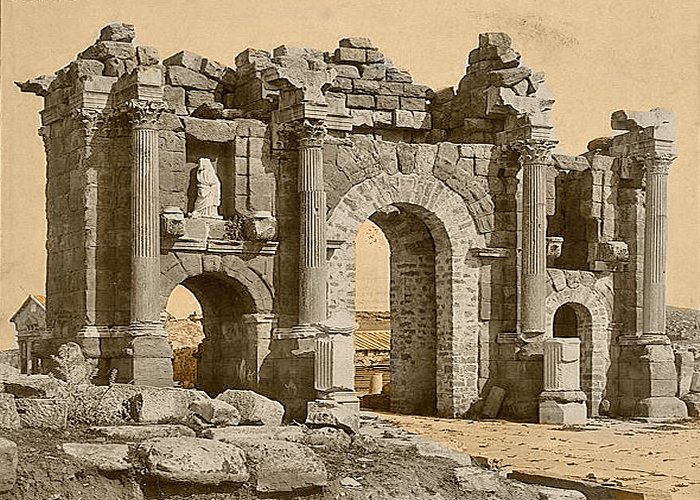 The town soon outgrew its original plan, and additional structures were added outside the grid.  Timgad - mostly inhabited by Roman veterans - was a peaceful town for the first several hundred years.

From the 3rd century, it became a center of Christian activity.

Located at the intersection of six roads, the city was walled but not fortified. Originally designed for a population of around 15,000, the city quickly outgrew its original specifications and spilled beyond the orthogonal grid in a more loosely organized fashion. 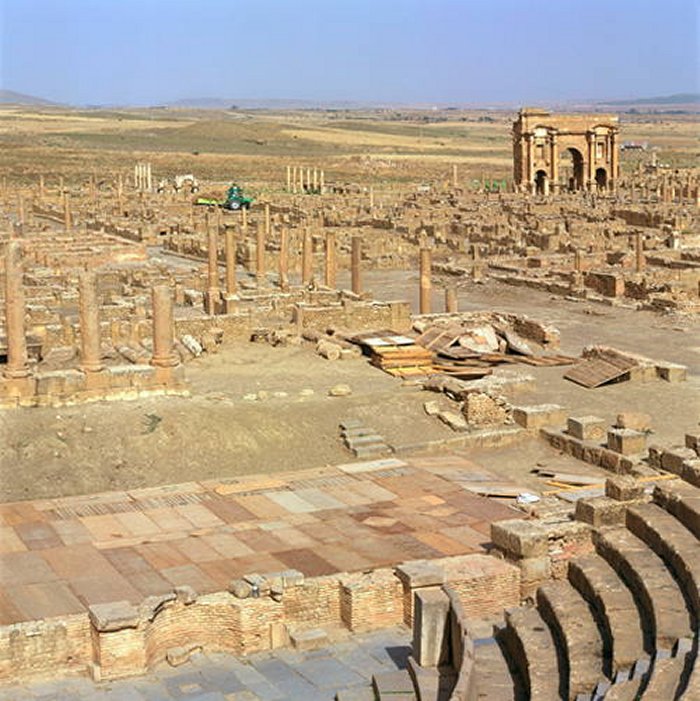 Ruins of the ancient city of Timgad, Image via Wikipedia

Buildings, constructed entirely of stone, were frequently restored during the course of the Empire. In Timgad, only Roman citizens were allowed to live their comfortable life but the Romans were aware they had to do much more in the area and not only for the citizens of the Empire.

The resistance of the locals was strong but the Romans managed to cope with the troublesome local tribes by attracting these people to Timgad's buildings built entirely of stone and the town's much better (than in surroundings) social life.

They also offered suitable places to develop the commerce of local products and soon, many natives decided to join the Roman Legion for a 25-year term in order to obtain Roman citizenship for themselves and their sons.

Pax Romana, 200-Year-Long Period Of Stability within the Roman Empire, helped Timgad to become an attractive settlement. In just 50 years after Timgad's foundation,  the city was mainly inhabited by indigenous people.

It had fountains, bathhouses with walls and floors decorated with beautiful mosaics displaying pagan mythological scenes, a theatre, a library, and a forum. It also had a triumphal arch.

Timgad's underground reservoir collected water for the bathhouses, pools, and fountains and there was also modern drainage, sewage system, and luxuries such as lavatories that could be heated during winter.

The Magnificent Arch Of Trajan

One very impressive ancient structure was the Arch of Trajan. The arch reaches a height of 12 meters, with a central arch of 6 meters in height which permitted the passage of vehicles that have left deep ruts in the ground under the archway). The lateral arches, each 3.75 meters high, were reserved for pedestrians.

The arch was built in 114 A.D. to commemorate the completion of the Via Trianna, but, more importantly, served the great purpose of glorifying the emperor, Trajan. 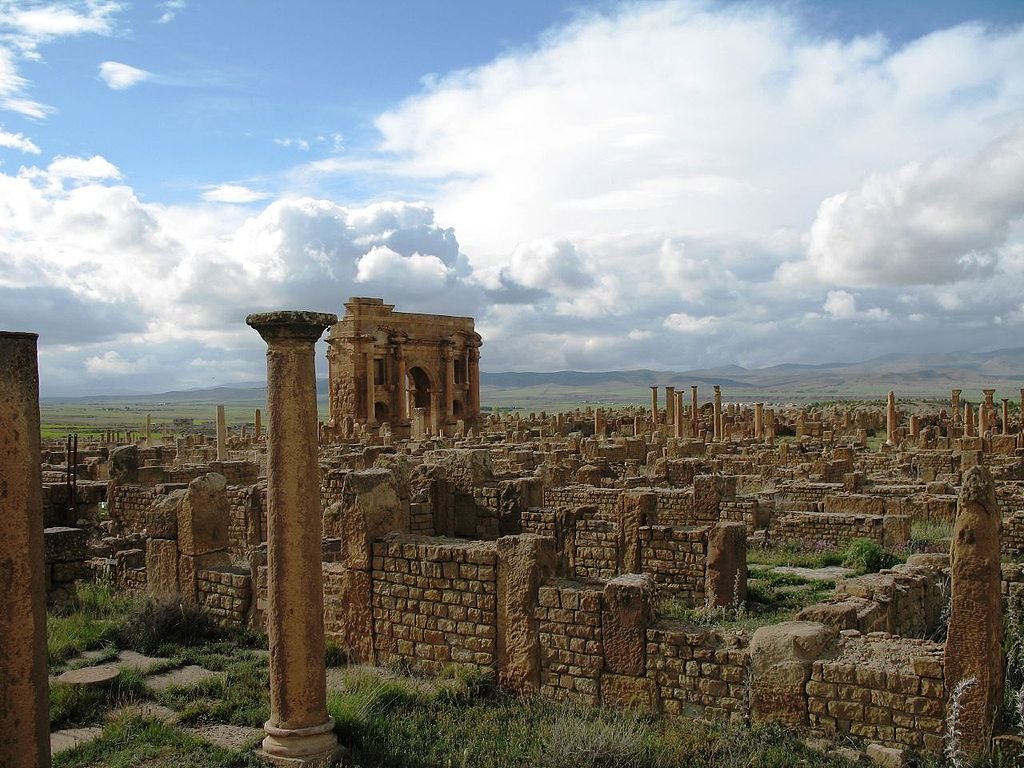 Trajan's Arch within the ruins of Timgad. Image credit: Wikipedia

One of the most common themes found on the arch is the Roman Empire's need to expand.  Almost all of the reliefs were tied into the concept of how the Roman Empire would continue to grow to encompass all of Italy, and eventually the Mediterranean.

Kingdom Of The Vandals: A People In Search Of A Home

Ancient Great City Of Napata In The Kingdom Of Kush

The Arch of Trajan is also quite notable for its representation of children.  Relative to other works of the time, the children on the arch are shown with far more important, especially in how they are pivotal to the growth of the empire.  Children are shown in a variety of manners, from slaves of the conquered barbarians to future citizens and soldiers, and even to eternal representations of the four seasons.

Library At Timgad Was Of A Great Historical Importance

When the Library at Timgad was built remains unknown, but it was a gift to the Roman people by Julius Quintianus Flavius Rogatianus. The library occupied a rectangle eighty-one feet (24.69 meters) long by seventy-seven feet (23.47 meters) wide. Its architecture of was not especially remarkable, but it was great historical importance as it showed the presence of a fully developed library system in this Roman city, indicating a high standard of learning and culture.

While there is no evidence as to the size of the collection the library harbored, it is estimated that it could have accommodated 3,000 scrolls.

After the Vandal invasion of 430, Timgad was destroyed at the end of the 5th century by Montagnards of the Aurès. The Byzantine Reconquest revived some activities in the city, defended by a fortress built to the south, in 539, reusing blocks removed from Roman monuments.

The Arab invasion brought about the final ruin of Thamugadi which ceased to be inhabited after the 8th century.