Scientists have uncovered the bones of four key members of Virginia’s Jamestown colony. Jamestown was settled near the Chesapeake Bay in 1607. Named for England’s King James I, this colony was the first permanent English settlement in North America.

All had died more than 400 years ago.

Their graves also held artifacts that cast light on the lives — and deaths — of these early American leaders. 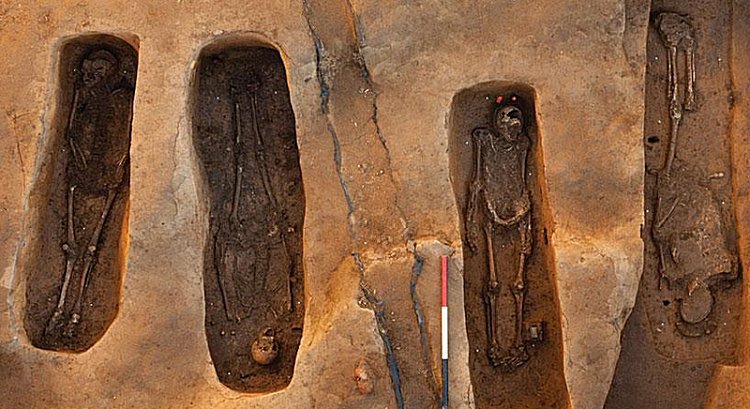 Excavating four graves at a historic church in Jamestown, Va., researchers turned up the remains of colony’s leaders buried there more than 400 years ago.

The first church there was used from 1608 to 1617. It hosted the marriage of Pocahontas, a Powhatan Indian woman, to John Rolfe, an early English settler. Archaeologists discovered the site of the church in 2010.

They also discovered graves of four settlers there . Excavations began in November 2013.

“These were individuals who were critical to the founding of English America,” said Douglas Owsley. He works for the Smithsonian Institution in Washington, D.C. As a forensic anthropologist, he specializes in digging up and examining skeletal remains to identify them. Owsley’s team worked with archaeologist William Kelso and his team from the Jamestown Rediscovery Foundation.


EXCAVATING JAMESTOWN This video provides a 3D look at the Jamestown site. It zooms into the church where archaeologists have recovered the remains of four leaders of the early American colony. The camera then approaches the remains of Capt. Gabriel Archer, and finally shows the silver box placed on his coffin. Smithsonian Institution

The researchers used several methods to identify the colonial graves. For instance, they analyzed teeth to learn the sex and the age at death for each man's bones. By analyzing chemicals in those bones, the scientists concluded that the men's diets included meat, a luxury. The bone analysis also showed that the men were exposed to lead, indicating they likely had access to high-status objects such as pewter bowls.

Other clues, such as coffin styles and artifacts placed with the dead, also helped pin down who each man was. Finally, the researchers examined historical and genealogical records. Those last records described the families’ histories.

Who they turned up

Reverend Robert Hunt lay in one grave. He was Jamestown’s first Anglican minister. Hunt died in 1608 at about age 39. His body was placed so that his head faced east. This was a traditional way of burying church leaders, or clerics, said historian James Horn. Horn is president of the Jamestown Rediscovery Foundation. The researchers suspect Hunt’s body was placed in a simple coffin and covered by a burial cloth known as a shroud. 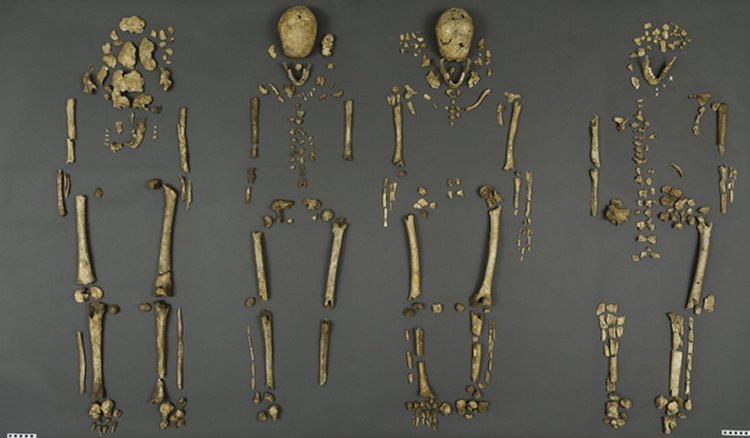 Four sets of human remains were excavated from the site of a 1608 church within the walls of James Fort at Jamestown, Va.

Another grave held Captain Gabriel Archer. He had been part of the first group to land at Jamestown in 1607. Archer helped lead trips to explore the region and was critical of the colony’s leader, John Smith. Archer was only about 34 years old when he died in late 1609 or early 1610. By this time, starvation, disease and Indian attacks had almost destroyed the English settlement.

A small silver box rested on top of a surviving piece of Archer’s coffin. Its placement means it probably was set there on purpose. Rather than breaking open the sealed box, the researchers used a type of X-ray scanning device called a CT scanner to inspect its contents. Those scans showed that the box contained seven bone fragments. It also held two pieces of what the researchers suspect was a lead flask for holy water.

This type of religious object is known as a reliquary. It is usually — but not always — associated with the Catholic faith. Its placement on Archer’s coffin hints that he may have been a secret Catholic living in an Anglican settlement, Horn suggests. Or the object may have had meaning for Anglicans, too, he adds. For now, that remains a mystery. 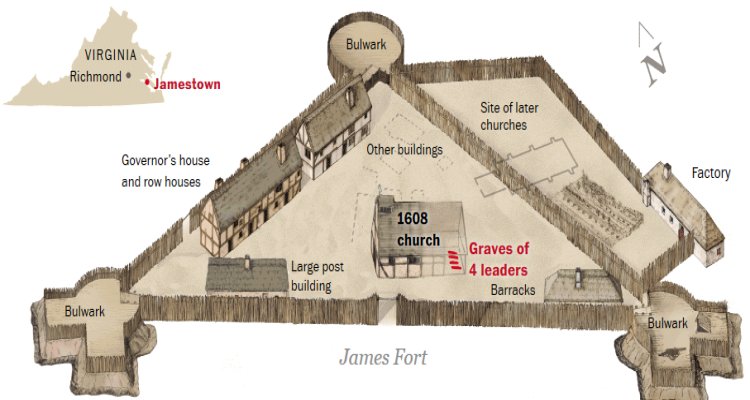 A third grave held Sir Ferdinando Wainman. He died in his mid-30s in 1610. That was about a month after he arrived in Jamestown with Sir Thomas West, who was not only his first cousin but also Virginia’s governor. They were on a mission to save the colony from destruction and to shore up its military defenses. Genealogical records show Wainman was the first English knight buried in America. Wainman’s wooden coffin did not survive. But the arrangement of nails in his grave shows he was probably buried in a human-shaped coffin.

The final grave was that of Captain William West. He died at around age 24, after a military clash in 1610 with nearby Powhatan Indians. High-resolution CT scanning, a method that shows more detail than ordinary CT images, indicated that cloth fragments found near West’s remains were part of a military leader’s silk sash. It had a silver fringe and spangles. Coffin nails in the grave suggest West too had been buried in a human-shaped coffin.

Artifacts in these four graves show the men’s status as bigwigs in Jamestown. Only graves of the wealthy included artifacts in English burials of that time, Kelso notes. Also, these graves were placed in the church’s most sacred section, near the altar.

The colony's early years were hard

One might think of Jamestown as the birthplace of colonial America. The first English settlers arrived on May 14, 1607. They set up their new colony 60 miles from the mouth of Chesapeake Bay. But days after the first colonists landed, they were attacked by Powhatan Indians. Survivors quickly built a wooden fort.

Disease, famine and more Indian attacks quickly took a heavy toll. During the winter of 1609 to 1610, the colonists faced a "starving time." Of 300 settlers who crammed into the fort that winter, only 60 survived to spring.

The later 1614 wedding of Pocahontas to tobacco grower John Rolfe helped cement a temporary peace between the colony and its Powhatan neighbors. But a 1622 attack of Jamestown by Pocahontas’ uncle in 1622 killed 347 people, one-third of the growing settlement. Undeterred, the colony’s survivors planted deeper roots and eventually Jamestown became a royal province of England.