AncientPages.com - One of the UK’s most important medieval manuscripts is surprisingly revealing ghosts from the past after new research and imaging work discovered eerie faces and lines of verse which had previously been erased from history, according to a new research.

Ghostly faces have emerged from the pages of a rare medieval book examined by scientists. 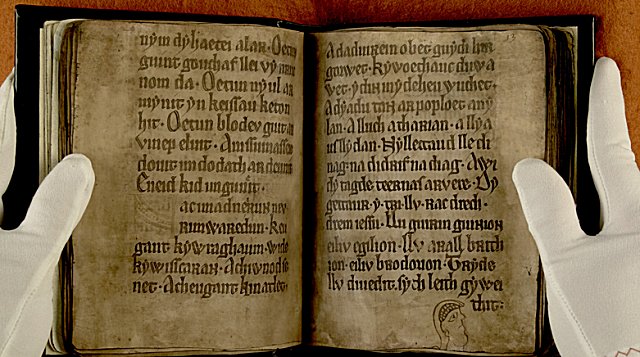 The Black Book of Carmarthen was written by a single monk around 1250 and is the oldest surviving manuscript written solely in Welsh.

The two spooky faces hidden to the naked eye for centuries were found by scholars using ultraviolet light in the 750-year-old Black Book of Carmarthen - which contains some of the earliest written references to King Arthur and Merlin.
The spine-chilling find jumped out from the pages under the UV light in the pages of the ancient book kept securely at the National Library of Wales,' reports South Wales Evening Post.

Professor Paul Russell, from the University of Cambridge's department of Anglo-Saxon, Norse and Celtic, said the discovery of the ghostly faces sent a shiver down his spine.

He said: "We were looking at the text with the ultraviolet lamp and this pair of faces emerged in the bottom margin.
"It was actually quite creepy with them peering back. We thought: 'Who are you?"

The Black Book of Carmarthen was written by a single monk around 1250 and is the oldest surviving manuscript written solely in Welsh. King Arthur makes one of his first appearances in literature as a ruler wanting to gain entrance to a royal court by singing the virtues of his men. Myrddin, better known in English as Merlin, appears in two other poems in dialogue with a Welsh poet.

The ink-drawn faces date to 14th or 15th century and alongside them is an inscription that suggests the passing down of the book from one generation to another.
As researchers shone a UV light over the 54 animal skin pages and discovered a whole host of doodles, drawings and poems hidden into the margins.

Experts believe the book – which contains a collection poetry dating from the 9th to the 12th century – was the work of a single scribe who was collecting and recording material over a long period.
Drawings discovered in the margins were added by later owners and include drawings of fish, medieval figures and a previously unknown poem in ancient Welsh.

Prof Russell said they all seemed to have been erased with a pumice stone by an owner of the book in the 16th century called Jasper Gryffyth.

"That tradition of adding to it over the years was carried on by subsequent owners, it was a living text that was constantly added to," said Prof Russell.
"But then this man in the 16th century went through the book tidying it up. The owner erased a lot of material from the left, right, top and bottom margins. 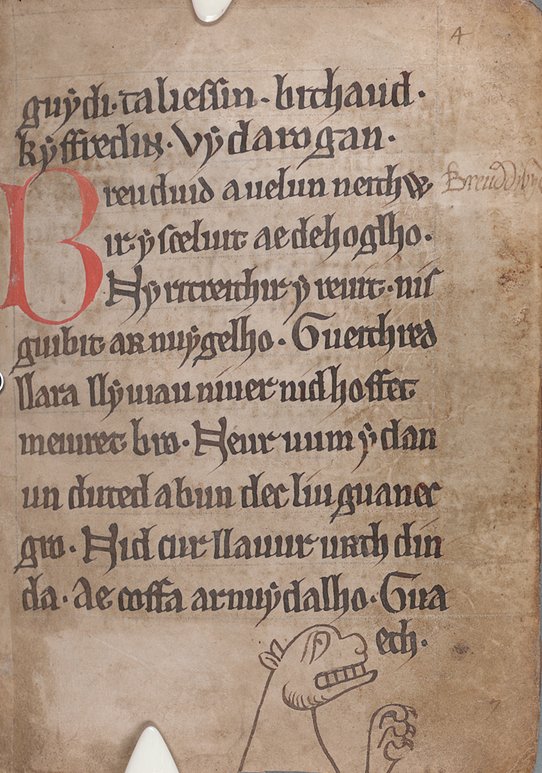 "Anything he thought was an addition, he got rid of. The pumice takes a slight layer off the surface, but the ink has penetrated a bit further so what we can do is use UV light to bring out that ink.

"On some bits of it you can't recover anything as it has been rubbed so hard."

The medieval manuscript - which measures just 17cm by 12.5cm - is held under special conditions in the National Library of Wales in Aberystwyth, to preserve its vellum pages.

Prof Russell said the findings were "very exciting" and believes they may be the tip of the iceberg which could shed new light on what early readers of the text thought.

"Although the texts are very well known, no one has really sat down and looked at the manuscript as a whole.
"Now we know this material is there, we can do a lot of things to bring it back."