Ellen Lloyd - AncientPages.com - Ragnar Lobrok, Ivar the Boneless, Bjorn Ironside, Erik the Red, Eric “Bloodaxe” Haraldsson – we associate all those names with courageous and fearsome Viking warriors, but none of them can be compared to the greatest Viking warrior of all - King Harald Hardrada.

Mighty King Harald Hardrada was the last great Viking and the most feared warrior of his world and time.

Viking Hardrada was an extraordinary man who lived an adventures life. He fought in the deadliest battles, and traveled to distant lands where he met exotic and powerful people. His courage and combat skills made him military commander in the Varangian Guard and Kievan Rus'. Hardrada spent all his life as a professional soldier, and his reputation preceded him.

In the Icelandic Sagas, Viking Hardrada is portrayed as a great hero, but behind all the ancient legends we find a very complex figure, a man who was charismatic, daring, and resourceful. Viking warrior Hardrada became a patron of poets and he was known as ‘feeder of ravens’.

The most comprehensive accounts of King Harald Hardrada’s life can be found in the thirteenth-century collections of sagas of the Norwegian kings, of which the most respected is the one known as Heimskringla and reliably attributed to the Icelandic historian, poet, and politician Snorri Sturluson (1179 - 1241).

German churchman, Adam of Bremen also documented some of King Hardrada’s expeditions, but the cleric’s writings are hostile in nature and far from objective. He does however, confirm the great Viking’s military skills and warlike reputation when he refers to Hardrada as the ‘thunderbolt of the north’.

Born as Harald Sigurdsson in Ringerike, Norway in 1015, he was the child of Åsta Gudbrandsdatter and her second husband Sigurd Syr, a king of Ringerike and one of the wealthiest chieftains of Upplands, the lands and forest regions to the north of Oslo in Norway. After his death, he was given the title “Hardrada” which means “hard ruler”.

From her first marriage, Åsta Gudbrandsdatter was also the mother of King Olaf Haraldsson of Norway, who was later to become St. Olaf.

Hardrada admired his half-brother King Olaf very much and it could not have been easy, to see him die in a battle. This particular event was of great significance for his personal destiny and changed his life. Hardrada was loyal to his half-brother until the end.

When Hardrada was 15 years he engaged in his first battle under the command of his half-brother and hero King Olaf.  Snorri Sturluson’s Heimskringla describes what happened during the battle Stiklestad, and one can say this was the beginning of Viking Hardrada’s military carrier.

In 1028, there was a revolt and King Olaf lost the Norwegian throne to Cnut the Great, England’s Danish king and ruler of one of the largest Nordic Empires. 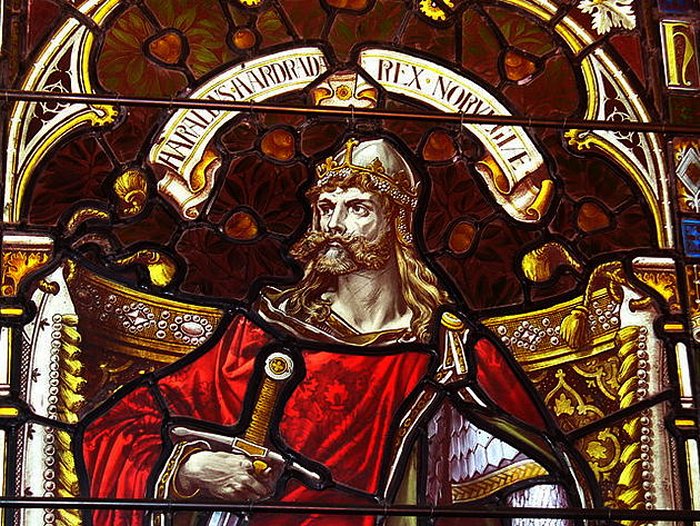 King Olaf who had been baptized made his best to convert Norway to Christianity. He also revived and revised the law code of Harald Fairhair, the king who united Norway into one kingdom in 872 AD. He affirmed his influence in the North Atlantic colonies, most importantly in the jarldom of Orkney and he prohibited plundering, but only within the country.

There is no doubt, King Olaf made many crucial changes, but his days was numbered. Cnut the Great had other plans. He wanted to reclaim the throne of Norway and King Olaf was forced into exile.

Two years later, in 1030, King Olaf returned to Norway with a force more than fourteen hundred strong and he was joined by Hardrada and his group of 700 hundred warriors. Together they engaged the army of Cnut the Great, but the battle did not end well. King Olaf was killed and Hardrada was badly wounded and forced to flee. Though, he was only 15 years at the time, he showed great combat skills during the battle.

His appearance must have been striking to some. Snorri Sturluson described Harald Hardrada as physically "larger than other men and stronger". He is said to have had light hair and beard, a long "upper beard" (moustache), and that one of his eyebrows was somewhat higher situated than the other. He also reportedly had big hands and feet, and could measure five ells in height.

In one year, Hardrada managed to cross the Baltic together with other survivors of Olaf’s defeated army. After arriving in Russia, he visited his distant relative Yaroslav I, Grand Prince of Rus', known as Yaroslav the Wise. The prince had helped King Olaf after the revolt. Being in need of skilled warriors, he employed Viking Hardrada who became captain of the forces of Prince Yaroslav of Kievan Rus. Hardrada fought many battles for Grand Prince Yaroslav the Wise.

After spending some years in Prince Yaroslav’s army, Hardrada left Kiev together with his warriors and traveled to Constantinople, the capital of the Byzantine Empire. ‘

His goal was to join the impressive Varangian Guard. As previously mentioned in our article, the Varangian Guard represented the elite heavy infantry regiment of the Roman (‘Byzantine’) Empire from AD 988 AD to around 1404 AD.

They were Vikings for hire, who successfully conquered territories across the Empire. They fought in Crete, Italy and in Asia Minor.

These professional warriors were highly valued for their courage and loyalty; they had also high fighting skills and ability to carry out commands efficiently and without unnecessary questions. Harald Hardrada joined the Varangian Guard. He was the best berserker and he became the “leader over all the Varangians”.

As commander, he fought in places as far apart as the Mediterranean, Asia Minor, Sicily, and the Holy Land. He was a famous and respected military leader. Hardrada had now enough earnings to marry Yaroslav’s daughter Princess Elisaveta (Elisiv), something he could not do earlier because he was too poor.

Ivar The Boneless: Famous Viking And Son Of Ragnar Lodbrok

Rich in combat experience and wealth Hardrada returned to Scandinavia in 1046. He had carefully prepared his campaign of reclaiming the Norwegian throne. Cnut the Great had died and Magnus I, also known as Magnus the Good was now king of Norway.

Harada reached an agreement to share the rule of Norway with Magnus I. When Magnus I died, Harada became the sole King of Norway.

Harada was not happy with only being the king of Norway. He wanted to rule over Denmark as well, and he and his warriors plundered the country repeatedly, but the Danish King Svein Estridsson who lost almost every battle against Harald, managed to stain in power. In 1064, Harald and Sweyn reached a peace agreement.

Knowing, Denmark could not be his, the warrior King Hardrada sought new grounds that he and his men could conquer. Hardrada's eyes were now on England.

Battle At Stamford Bridge And The Death Of King Hardrada

After the death of Edward the Confessor, the English throne passed to Harold Godwinson. King Hardrada allied himself with Tostig Godwinson, Harold's brother, who had been deprived of the earldom of Northumbria by Edward in 1065.

In 1066, Saxon troops of Mercia and Northumbria commanded by brothers Earl Edwin and Earl Morcar and met a Norse army under command of King Harald Hardrada accompanied by Earl Tostig.

Both King Hardrada and William, Duke of Normandy wanted the throne of England. William gathered a fleet and was ready to sail across the Channel to the south coast of England, Harald gathered an invasion force in the north. The Norman army had only 7,000 men. King Hardrada’s Viking warriors met the troops from Mercia and Northumbria, at Fulford, on the outskirts of York and the battle took place.

It was terrible fight, in which the armies of Mercia and Northumbria were defeated. York surrendered to the invaders, and Harald did not enter the city but retired to Stamford Bridge to await the gathering of hostages from around the region.

This was a huge mistake. The Norse warriors had only 5 days to enjoy their victory at Fulford.

On 25 September, King Harold, the last Anglo-Saxon king of England, surprised Harald Hardrada of Norway at Stamford Bridge, and defeated the Norsemen. Hardrada and Tostig were killed. Harald Hardrada’s death was caused by an arrow that struck his neck. He was buried at the Mary Church in Nidaros, Norway.

In a way, it’s a bit ironic that a great warrior like Hardrada who traveled to distant lands and fought in deadliest battles died after spending only a few days on British soil.

With the death of King Hardrada the Viking Age ended. Hardrada was harsh ruler who often solved disputes with force, but his reign was one of peace and progress for Norway. He advanced Christianity in Norway, built churches, imported bishops, developed a Norwegian currency and a viable coin economics. His contacts with the Byzantine Empire and Kiev helped Norway to expand its international trade. King Hardrada also founded the capital Oslo.