Conny Waters - AncientPages.com - Honey and other bee products were likely a sought-after foodstuff for much of human history, with direct chemical evidence for beeswax identified in prehistoric ceramic vessels from Europe, the Near East and Mediterranean North Africa, from the 7th millennium BC.

A team of scientists, led by the University of Bristol, with colleagues from Goethe University, Frankfurt, has found the first evidence for ancient honey hunting, locked inside pottery fragments from prehistoric West Africa, dating back some 3,500 years ago.

Honeybees are an iconic species, being the world’s most important pollinator of food crops. Honeybee hive products, including beeswax, honey and pollen, used both for food and medicinal purposes, support livelihoods and provide sources of income for local communities across much of Africa, through both beekeeping and wild harvest. 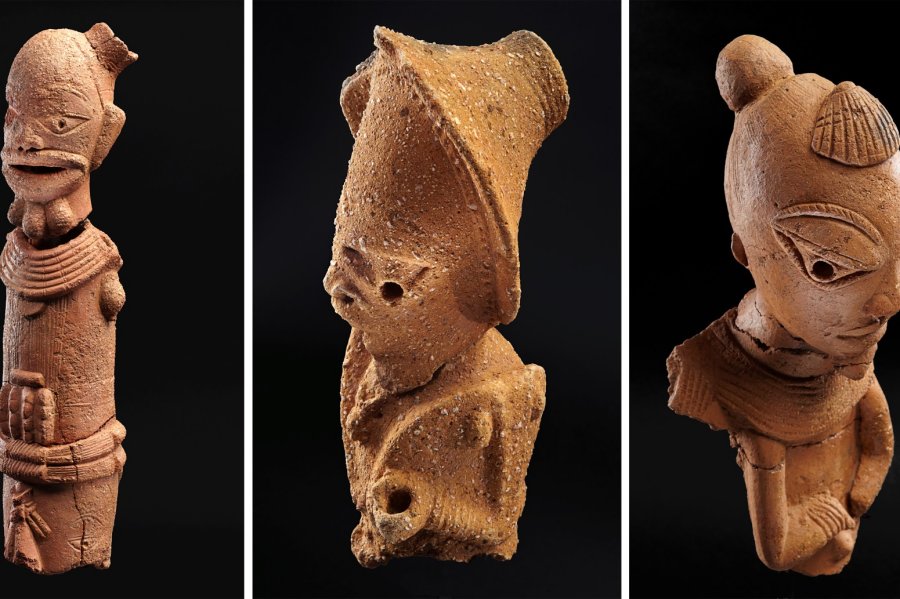 Today, honey is collected from wild bee nests in many African countries. In the West African tropical rain forest, hunting for wild honey, found in natural hollows in tree trunks and on the underside of thick branches, is a common subsistence activity.

Historical and ethnographic literature from across Africa also suggests that bee products, honey and larvae, were important both as a food source and in the making of honey-based drinks, such as beer and wine.

The Bristol team were carrying out chemical analysis of more than 450 prehistoric potsherds from the Central Nigerian Nok culture to investigate what foods they were cooking in their pots. The Nok people are known for their remarkable large-scale terracotta figurines and early iron production in West Africa, around the first millennium BC. Around one-third of the pottery vessels used by the ancient Nok people were used to process or store beeswax. The presence of beeswax in ancient pottery is identified through a complex series of lipids, the fats, oils and waxes of the natural world. The beeswax is probably present as a consequence either of the processing (melting) of wax combs through gentle heating, leading to its absorption within the vessel walls, or, alternatively, beeswax is assumed to act as a proxy for the cooking or storage of honey itself.

Honey is often an important food source for hunter-gatherers and there are several groups in Africa, such as the Efe foragers of the Ituri Forest, Eastern Zaire, who have historically relied on honey as their main source of food, collecting all parts of the hive, including honey, pollen and bee larvae, from tree hollows which can be up to 30 m from the ground, using smoke to distract the stinging bees.

Honey may also have been used as a preservative to store other products. Among the Okiek people of Kenya, who rely on the trapping and hunting of a wide variety of game, smoked meat is preserved with honey, being kept for up to three years, A number of the Nok pots contained chemical evidence for the presence of both beeswax and meat products. 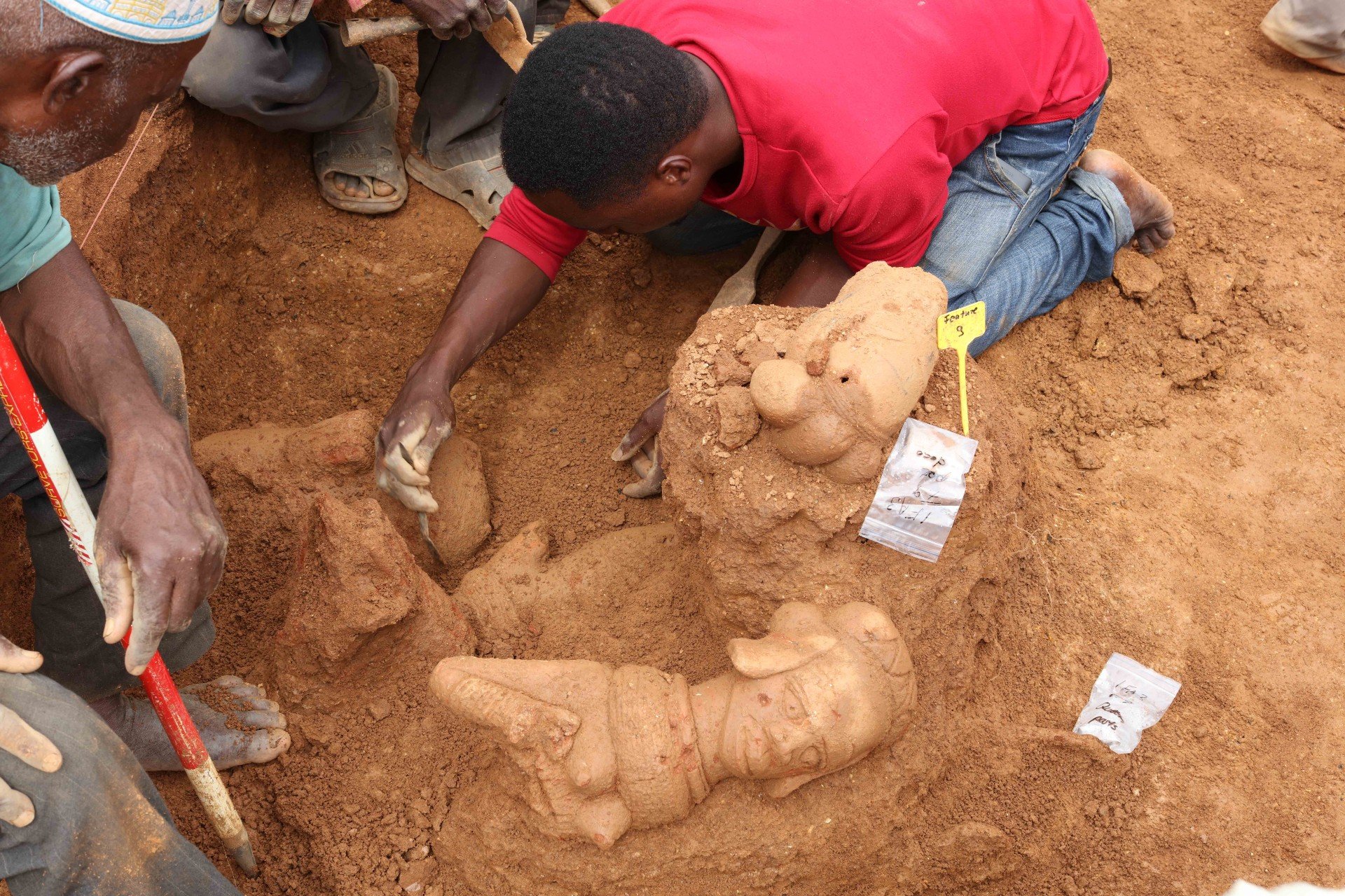 As well as using honey as a food source, it may have been used to make honey-based drinks, wine, beer and non-alcoholic beverages, which are commonplace across Africa today, although it should be noted that the chemical identification of ancient fermentation is notoriously difficult. The writings of ancient explorers provide insights into the antiquity of these practices. For example, Ibn Battuta, the Muslim Berber scholar and explorer, whilst visiting Mauritania in 1352, tells of a sour drink made from ground millet mixed with honey and sour milk. A further account of the preparation of wine from honey is found in a record of a Portuguese visit to the west coast of Africa (1506-1510).

Honey and beeswax may also have been used for medicinal, cosmetic, and technological purposes. Beeswax has also variously been used from prehistoric times as a sealant or waterproofing agent on Early Neolithic collared flasks in northern Europe, as a lamp illuminant in Minoan Crete and mixed with tallow, possibly for making candles, in medieval vessels at West Cotton, Northamptonshire.

“This is a remarkable example of how biomolecular information extracted from prehistoric pottery, combined with ethnographic data, has provided the first insights into ancient honey hunting in West Africa, 3,500 years ago,” lead author, Dr Julie Dunne from the University of Bristol’s School of Chemistry, said in a press release.

Professor Richard Evershed FRS who heads up Bristol’s Organic Geochemistry Unit and is a co-author of the study, added: “The association of prehistoric people with the honey bee is a recurring theme across the ancient world, however, the discovery of the chemical components of beeswax in the pottery of the Nok people provides a unique window on this relationship, when all other sources of evidence are lacking.”

Professor Peter Breunig from Goethe University who is the archaeological director of the Nok project and co-author of the study, said: “We originally started the study of chemical residues in pottery sherds because of the lack of animal bones at Nok sites, hoping to find evidence for meat processing in the pots. That the Nok people exploited honey 3,500 years ago, was completely unexpected and is unique in West African prehistory.”

Professor Katharina Neumann from Goethe University, Frankfurt, who is the archaeobotanical director of the Nok project and co-author of the study, added:

“Plant and animal remains from archaeological sites usually reveal only a small part of what prehistoric people had been eating. Chemical residues of beeswax in potsherds opens up completely new perspectives for the history of resource exploitation and ancient diet.”