Ellen Lloyd - AncientPages.com - Greatly overshadowed by his son, Ramesses II, who is today hailed as the greatest Pharaoh of all times, Seti I did more for ancient Egypt than most realize. Pharaoh Seti I reigned only ten or possibly fifteen years, but his deeds and accomplishments equal those of a much longer reign. 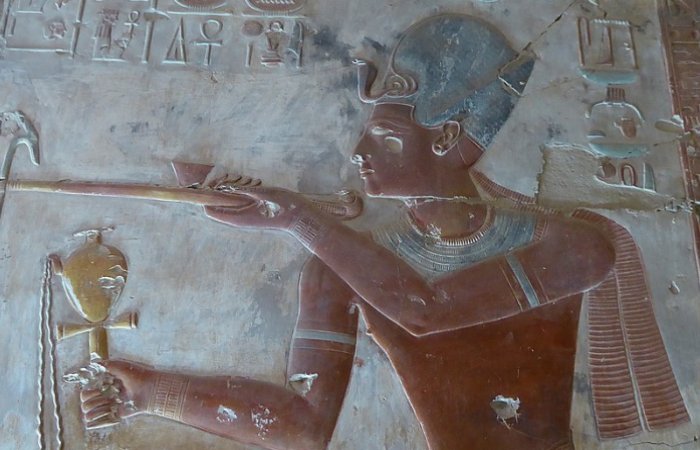 Few rulers would envy the problems Seti I faced when he ascended the throne in 1290 B.C. (or 1294 B.C., according to some historians). The new Pharaoh became the ruler of a weak kingdom. Many great ancient Egyptian temples were partly ruined, and foreign enemies had their eyes on Egypt, considering it an easy military target. Egypt is doomed if the new Pharaoh fails to conquer the hostile neighboring kingdoms.

Nevertheless, Seti I did what was expected of him, and perhaps even more. Against all odds, he saved the kingdom of Egypt and gave it new life, but how did he accomplish this?

If we look through modern eyes, it is easy to say that Pharaoh Seti I was brutal and cruel. He did not hesitate to execute many prisoners before Amun and later memorialized his successful military campaign on temple walls. When Seti I lived, this was a standard procedure, and Pharaoh Seti did what every Egyptian king would have done.

So, who was this Pharaoh who reigned for a brief period and accomplished so much? Why was Seti I of the greatest figures in the history of Egypt?

Seti I, the second king of the nineteenth dynasty, the New Kingdom, was the son of Ramesses I, whom he rapidly succeeded. Like most Pharaohs, Seti I had many different names. 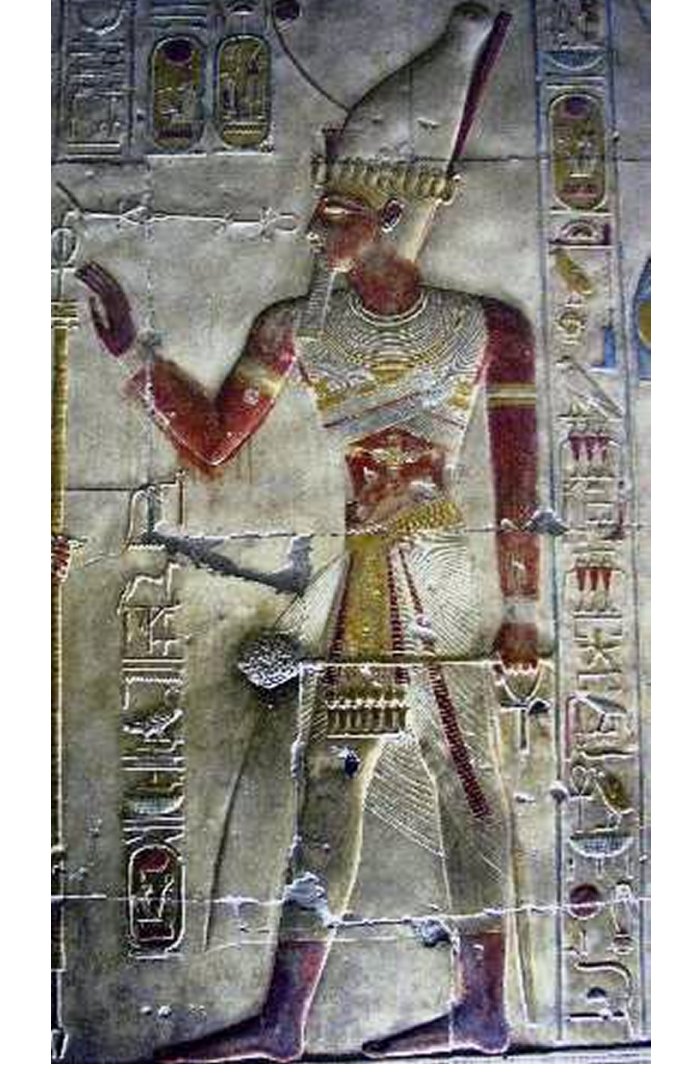 Image of Seti I from his temple in Abydos. Image credit: Messuy - CC BY-SA 3.0

"His "throne name was Menmaat-re "Enduring is the Divine Order of Re," and his birth name, Setekhy, means "he who belongs to the god Setehk" His Horus name, whm-mswt, "repeating the creation" alludes to the beginning of a new era after the disturbances of the Amarna period – Sety I was the first king to succeed legitimately to the throne after his father Ramesses I." 1

"Horus was worshipped in different forms throughout Egypt from the predynastic period before Egypt was united under one ruler until Roman times. The pharaohs of Egypt took a Horus name to symbolize that they were the living embodiment of this god." 2

Amarna is a fascinating historical period in ancient Egypt, related to the reigns of Pharaoh Akhenaten of the 18th Dynasty of Egypt and his wife Nefertiti and Amenhotep III (1402-1364).

Historians benefited greatly when the Amarna Letters were discovered, as the ancient tablets shed light on this troublesome period in ancient Egyptian history.

Pharaoh Akhenaten's dissatisfaction with old Egyptian tradition, eradicating all signs of the Amun-Re cult and establishing monotheism in the country, was not welcomed by all people, especially not the Egyptian priests. The role of the latter power was suddenly limited. 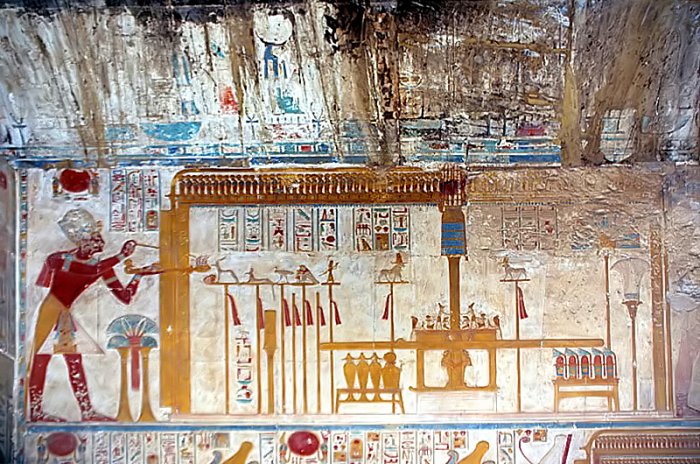 "Many historians claim that Akhenaten was a careless, incompetent, and unsuccessful ruler. Their claims are most probably based on evidence in the form of the Amarna Tablets, which contain governmental documents and correspondence confirming his incompetence." 3

The brief reign of Pharaoh Seti I is mainly characterized by his efforts to restore ancient Egyptian temples, sculptures, and reliefs and, at the same time, wage wars with neighboring kingdoms.

Evidence of his building efforts and determination to revive polytheism can still be seen at many sites in Egypt," from Elephantine in the South to Heliopolis in the North. At Thebes, he constructed the Great Hypostyle Hall in front of the temple of Amun at Karnak. On the western side of the Nile River, he built a mortuary temple and splendid royal tomb (tomb 17 in the Valley of the Kings) with elegant, colorful reliefs and an astronomical ceiling. In Abydos, he constructed a mortuary temple for the great gods of Egypt and his royal ancestors, the kings of Egypt from Menes until his reign, which was a national shrine and the most beautiful temple of ancient Egypt." 1

Modern tourists owe Seti I much when they visit some of the most beautiful ancient sites in Egypt.

As much as Pharaoh Seti I enjoyed restoring sacred temples, he could not forget about his enemies surrounding his kingdom. Still, sometimes, he was the aggressor and attacked foreign lands without provocation.

Pharaoh Seti I's military campaign in Syria started as early as the first year of his reign. At the head of a large army, Seti I took his adversary Mautenar by surprise. "Seti and Mautenar were at war before the latter had been on the throne a year, and their swords were at one another's throats.

Seti was, apparently, the aggressor. We find him at the head of a large army in the heart of Syria before we could have supposed that he had had time to settle comfortably in his father's seat. Mautenar was taken unawares. He had not expected so prompt an attack. He had perhaps been weak enough to count on his adversary's good faith or, at any rate, on his regard for appearances. 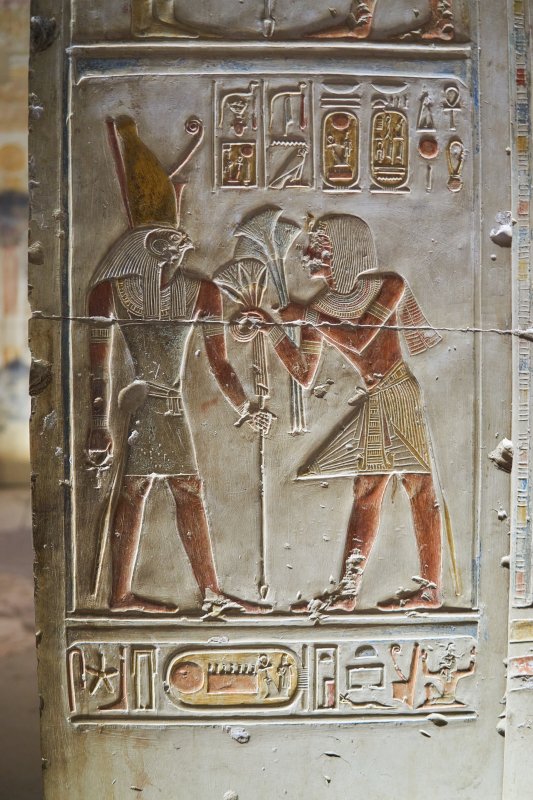 Colorful carvings on a Temple Column, with the images of Seti I and Horus from the Temple in Abydos - Credit: Adobe Stock - Svetlaili

But Seti, as a god upon earth, could do no wrong and did not allow himself to be trammelled by the moral laws binding upon ordinary mortals. He boldly rushed into war at the first possible moment, crossed the frontier, and having chastised the Shasu, who had recently invaded his territory, fell upon the Kharu, or Southern Syrians, and gave them a severe defeat near Jamnia in the Philistine country.

He then pressed forward into the country of the Rutennu, overcame them in several pitched battles, and, assisted by a son who constantly fought at his side, slaughtered them almost to extermination. After a time, his victorious progress brought him to the vicinity of Kadesh, the important city on the Orontes which, a century earlier, had been besieged and taken by the Great Thothmes. Kadesh was at this time in possession of the Amorites, who were tributary to the Khita (Hittites) and held the great city as their subject allies.

Seti carefully concealed his advance, and Seti came upon the stronghold suddenly, taking its defenders by surprise. Outside the city, peaceful herders were pasturing their cattle under the shade of the trees when they were startled by the appearance of the Egyptian monarch mounted on his war-chariot drawn by two prancing steeds.

At once, all was confusion: everyone sought to save himself; the herds with their keepers fled in wild panic while the Egyptians plied them with their arrows. But the town's garrison resisted bravely: a portion sallied from the gates and met Seti in the open field, but were defeated with great slaughter; the others defended themselves behind the walls. But all was in vain. The disciplined troops of Egypt stormed the key of Northern Syria, and the whole Orontes valley lay open to the conqueror." 4

Seti I waged wars "against the Libyan of the western desert, and there was a renewed attack upon Syria and Lebanon, where for the first time, Egyptians met Hittite in battle. One scene at Karnak shows the capture of Kadesh that was to be the focus of the famous battle in later years under Seti's son, Ramesses II". 5

Pharaoh Seti I often used the element of surprise when attacking and conquering new lands. He did not think twice before slaughtering people, and there is no doubt he was brutal and cruel, but most Pharaohs were.

Today, some will hail Pharaoh Seti I as a hero for saving the Egyptian kingdom and giving it new glory and life. Still, there will also be those who say he was a ruthless Egyptian king who killed innocent people and looted foreign lands.